What Shivraj Chouhan’s Biryani Remark Gives Away About SIMI Encounter

The Chief of the Anti-Terror Squad of Madhya Pradesh has repeated today that the eight men accused of links with the banned outfit SIMI who were undertrials in cases ranging from murder to bank robberies did not have arms when they were shot down by the Bhopal police hours after they escaped from jail.

Will he now be called an anti-national for contradicting the lies spread by top BJP leaders? The National Human Rights Commission (NHRC) has also issued notice to the government, taking suo moto notice of the so-called encounter. Will they too be so charged? More than a decade ago, when the NHRC chief, the late Justice Verma, held the then Gujarat government led by Narendra Modi complicit in the 2002 genocide, he was threatened and abused for supporting “anti- nationals.” For the ruling regime at the centre, “nationalism” consists of burning the constitutional and legal provisions which uphold India as a democratic, secular republic.

When the Madhya Pradesh Chief Minister Shri Shivraj Chouhan paid homage to the slain head warder of Bhopal Central jail, Shri Ramashankar Yadav and consoled his grieving family, was there even a fleeting moment of guilt that struck him when he laid a wreath? Did he feel any remorse when he met the daughter? Her wedding is scheduled for next month and according to his family, Shri Yadav was totally preoccupied with the preparations. Yadav was brutally killed allegedly by those whom Chouhan’s government has described as “hardened Simi terrorists.” 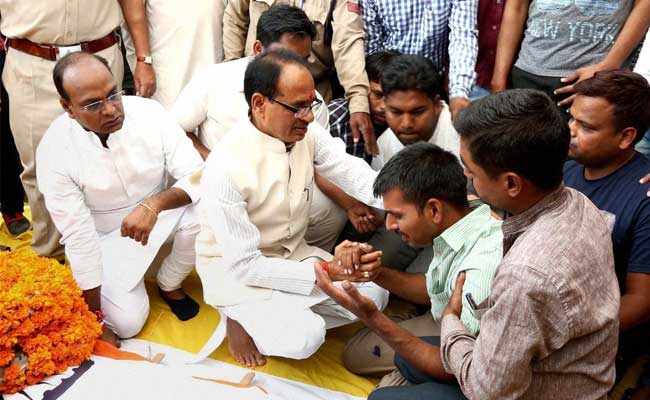 Chief Minister Shivraj Singh Chouhan consoles a family member of head warder, Ramashankar Yadav in Bhopal on Tuesday
Why should the Chief Minister feel guilty? Well, if the Madhya Pradesh government had done its job, there was no reason why Yadav would not have been alive to attend his daughter’s wedding. Who is responsible, who is accountable? In spite of reservations of some of the senior jail officials who have now spoken to the media, the government had transferred nearly 40 accused in cases related to SIMI to this single jail. Some of them were also kept in the same cell. Such a serious decision could only have been done with the Chief Minister’s acquiescence. Having brought them all under one roof and, in this case, in one barrack, why was there no proper monitoring of security measures? Why were there no alarm systems? How is it that no CCTV footage is available when there were four cameras in the very place that Yadav’s murder reportedly took place?

The Madhya Pradesh minister in charge of jails, perhaps not as well versed in duplicity as some of her colleagues, admitted “There were mistakes on behalf of the jail administration.” She quickly added that she herself had taken charge only a month and a half ago. Shivraj Chouhan does not have this alibi. He has been Chief Minister since 2005. During this period, according to data from the National Crime Records Bureau (NCRB), Madhya Pradesh has had 28 jailbreaks, the second-highest number of jailbreaks in the country. In those cases too, as in the present case, jail officials were suspended or dismissed. But clearly the rot is deeper in the very system of governance in a state which has seen over 40 mysterious deaths in the Vyapam corruption scam, all passed off as accidents, seen the highest crime rate including of rapes, yet the conviction rates are low. It is in this state too, that in just three years, between 2010 to 2013, there have been 20 registered cases of “encounter killings,” but more of that later.

So yes, Shivraj Chouhan should have felt guilt, remorse, a sense of responsibility at Yadav’s funeral. A better man would have resigned. But not him. He came out of the slain man’s home, guns blazing at the opposition for even daring to ask questions and of course, having named Yadav a martyr, accused the opposition of being more concerned about the “killed terrorists rather than the martyr.” Nothing could be more hypocritical and self-serving. Yadav was martyred by the rot, the corruption, the callous governance in Madhya Pradesh.

The sarkari version of the so-called escape and the subsequent killing in cold blood of the eight men has been torn to shreds by the videos that have surfaced that graphically depict how they were killed. There is no need here to describe the shootings, nor to reiterate the many questions that have arisen because of the contradictory statements of ministers and officials. They are tripping over themselves (lies and liars tend to do that) every time they open their mouths. If one says the keys used to get out of cells were fashioned from toothbrushes, the other says the keys were snatched away from an assaulted guard. If one says they were killed in cross firing, the other says the alleged SIMI members were armed not with guns but with kitchen utensils and stones. If one says it could be an inside job, the other says there must have been outside help and so on. Manufactured, dubious and with no credibility whatsoever. 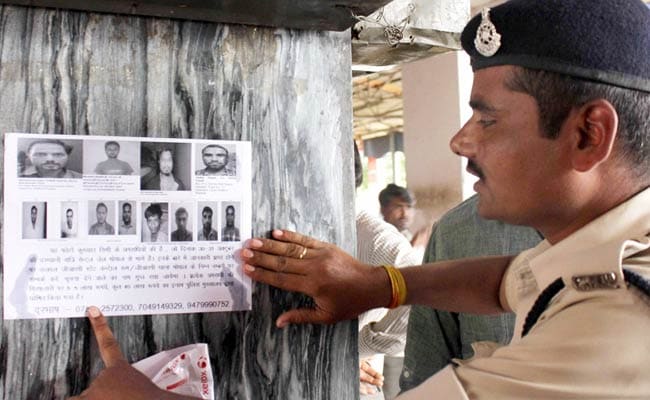 8 SIMI men escaped from the Bhopal Central Jail after killing a guard with a knife
But from central ministers led by Venkaiah Naidu and Ravi Shankar Prasad to BJP official spokespersons, the narrative sought to be employed is that questioning or pointing out the glaring discrepancies is to be anti-national. Venkaiah Naidu says “Doubts should not be raised on actions of security forces as it lowers their morale.” Ravi Prasad says “Some people are showing more concern for them (the killed prisoners) than for the security of Indians and India as a nation.”

Those killed were also Indians with the right to a fair trial under the law, and, if convicted, be shown no quarter for the crimes they committed, but for the Law Minister, such legal niceties are apparently irrelevant. The spokesperson says “Will it not weaken the resolve of police forces, armed forces, the army, when questions are raised against them?” But even worse is the crude communal profiling and shameful justification of the fake encounter killings by the Chief Minister asking in his speech “How long will we keep feeding them biryani?” Are we to assume that he therefore thinks that extra judicial killings of undertrials are perfectly justified and should become the new normal if they are Muslims?
Not far away from the Bhopal jail, in the neighboring state of Maharashtra in other jails are individuals accused of killing innocent people in a series of bomb blasts from Malegaon to the Samjhauta Express. Almost 100 people were killed. The BJP government has not opposed their bail petitions. It is in this case that an officer in the National Investigation Agency, the agency now charged with the inquiry of the Bhopal events and killings, reportedly delivered a message from his bosses to the public prosecutor to go soft on the accused. Do Shivraj Chouhan and others of his beliefs ever ask how long will they have to be fed with puri-aloo or whatever it is that those accused in Hindutva group crimes like to eat? Such a discourse itself is sickening because it is communally selective in condemning or praising those involved in terrorist acts that kill innocent civilians. Those who accuse others of “dirty vote bank politics” are blatant and crude in their subversion of facts and the truth in order to push their sectarian communal agenda.

The fugitives were hunted down to a hilly patch around 8 km from the prison and shot dead
The culture of fake encounter killings has a long and bloody history in India. It certainly did not start with the BJP, although it can be said that under the BJP, new toxic dimensions are added, both politically and in the diabolical effort to communalise the armed forces and security agencies.

At the time of the fake encounters in Gujarat, including the gunning down of Ishrat Jahan, one of the main accused in the fake encounters, the then DIG of police in Gujarat VD Vanzara, in his resignation letter from the police wrote, about the encounter killings “With the passage of time, I realized that this government (referring to the Modi-led Gujarat government with Amit Shah as Home Minister) was not only not interested in protecting us but it also has been clandestinely making all efforts to keep me and my officers in the jail so as to save its own skin from CBI on one hand and gain political benefits on the other…

I, therefore, would like to categorically state in the most unequivocal words that the officers and men of Crime Branch, ATS and Border Range, during the period of years between 2002 to 2007, simply acted and performed their duties in compliance of the conscious policy of this government…we have simply implemented the conscious policy of this government which was inspiring, guiding and monitoring our actions from the very close quarters.”

Even though Vanzara is back in the BJP fold, he has not withdrawn those charges. Fake encounters such as those in Gujarat and now in Madhya Pradesh cannot take place without the sanction of the political leadership. The NIA investigation into the Bhopal killings, including that of Ramashankar Yadav, will not bring out the truth.

Delhi Riots: Khureji Crackdown Fact Finding Report
Can the ongoing devaluation of language and undermining of democracy be reversed?
Rape of foreigners in Goa has left a permanent scar #Vaw
Activists to protest SC order directing Teltumbde and Navlakha to surrender amid COVID-19