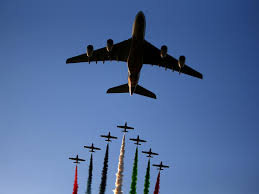 Misogyny shows itself up in many ways. In public places, it shows in the way women are denied even the most basic facilities like toilets.

The Indian ministry of defence has just concluded the 11th edition of the biennial aerospace show Aero India in Bengaluru. Superlatives have frequently been used by government officials over the years to describe Aero India, which indeed is India’s biggest defence and aerospace event, attracting the who’s who of the global defence industry, including presidents and CEOs.

This year over 250 foreign and roughly 270 Indian companies exhibited in Aero India, which was jointly inaugurated by ministers of defence and civil aviation. As is the trend worldwide, even in the defence industry, the number of women in the workforce has increased over the years. So at Aero India 2017, there appeared to be as many women at Air Force Station Yelahanka, which has been the permanent location of the show for the last two decades, as there were men. Even at extremely conservative estimates, there were at least 2,500-3,000 women at the show every day.

Yet, it didn’t occur to the organisers that these women would need access to clean toilets. There were just under a dozen toilets for women at the show, each afflicted with its own unique problem. Some had no water, toilet paper rolls or soaps; some had too much water on the floor, forcing the users to roll up their trousers or hitch up their sarees before entering, while some demanded a cross-country trek over unpaved ground, difficult to negotiate in heels.

One thing united them all: absolute lack of hygiene. For a show of this level, the organisers had hired local cleaning women to attend to the toilets, instead of professional housekeepers.

This makes a mockery of everything we claim and aspire for at so many levels. Let’s take each level one by one. We claim to be a leading power in Asia; our prime minister asserts that our time has come and the world must take notice; and he is exhorting global industry to come and ‘Make in India’. Yet, at the biggest showcase event, the infrastructure is so abysmal that foreign participants make sympathetic noises while putting India back in the third or the fourth world.

“Aero India is basically a national show for us unlike the Dubai or the Singapore Air Shows, which are more regional in nature,” one exhibitor told this writer, explaining why they neither expect nor get delegations from other Asian countries to Aero India. To look at the latest trends in defence and aerospace technology, customers from those countries prefer to visit Dubai or Singapore. “To attract international customers, you will really need to work on the infrastructure,” she said. After all, it stands to reason that if you cannot get something as basic as the toilets right, how can you be trusted with high technology?

But we do get a lot of technology right. Isro has just launched 104 satellites in a single flight. So what is this disdain towards providing toilets for women, if not a veiled attempt at keeping them out of public places? And if this is the state at a premier show crawling with so-called VIPs, one can only shudder to think of the state of toilets in lesser places.

At the second level, what does it say about the government’s Swachh Bharat Mission (SBM)? Clearly, if usable toilets cannot be provided for women at even high profile events, the fate of the millions of these being built under SBM is not difficult to imagine. In most urban areas, the problem is not of a toilet structure, but its condition.

Finally, the government is committed to giving greater opportunities to women in the armed forces. But by not providing them civilised facilities at their places of work, isn’t the government telling them that we may have opened our doors, but our minds remain shut? http://blogs.timesofindia.indiatimes.com/toi-edit-page/what-the-state-of-toilets-at-indias-aerospace-megashow-tells-us-about-our-aspiration-to-be-a-leading-power/