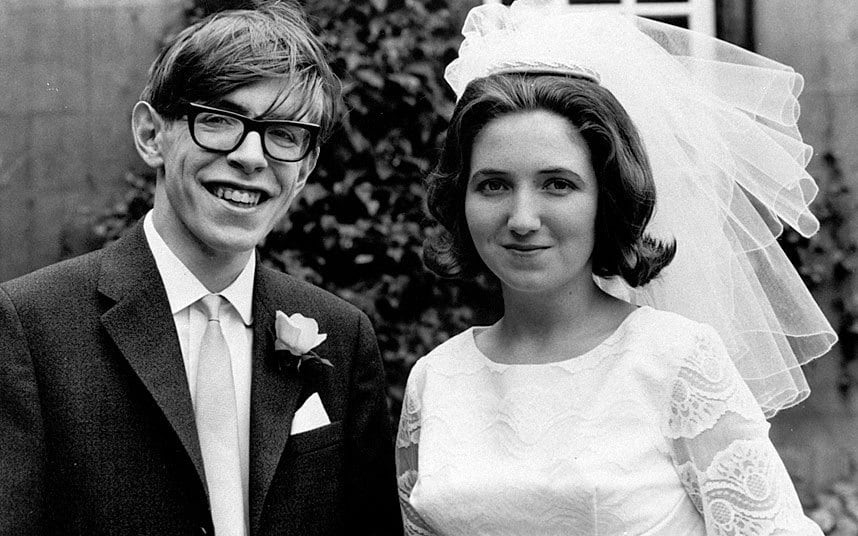 Based on his first wife’s memoir, the film refuses to tell her complicated and disturbing story

Stephen Hawking is a misogynist; and also, quite possibly, a narcissist. You wouldn’t know it from watching The Theory Of Everything, the new biopic from Working Title, in which you are invited only to weep when he discovers he has motor neurone disease at 21, and then marvel at his achievements in physics. It goes wild on the obvious cognitive dissonance of Hawking’s life and work — trapped in his body, yet transported in his mind to the stars.

I cried as Eddie Redmayne — as Hawking — falls, rises and is redeemed with medals too numerous to type; he is very good, but he only goes where the script allows him. But I do not like being manipulated by cinema, unless I know I am being manipulated; and Working Title is usually Steven Spielberg transported to the UK — all sudsy soap and sticky emotion. I am still angry that The Imitation Game, which was supposed to honour the mathematician Alan Turing, managed instead to call him a traitor. It stuck a Soviet spy in his hut, made him blackmail Turing, and he went along with it for fear of being outed as homosexual; less tribute than fiction.

So I read the book this film was based on. It is a memoir by Jane Wilde, Hawking’s wife of 30 years, and it is called Travelling to Infinity. (‘Infinity’, in this case, means ‘divorce’.) She wrote an earlier, angrier memoir, Music to Move the Stars; but this is now ‘revised’. Hawking too has written a memoir — My Brief History. This would never make a film, because it is too brief. It is almost an absence. So the film-makers turned to Jane for their story. They have used her shoddily.

Jane knew Hawking might not live long when they married in 1965. The original prognosis was two years. Even so, they made a home, they travelled to conferences abroad, they had three children. She abandoned her scholarly ambitions — the medieval lyric poetry of the Iberian peninsula, if you care, and he didn’t — to support his. Her sacrifice deserves thanks, but no thanks came; when he became the youngest fellow of the Royal Society at 32, he made a speech, but he did not mention his wife. And why would he? She had become ‘chauffeur, nurse, valet, cup-bearer, and interpreter, as well as companion wife’; that common ghost that haunts university cities — ‘a physics widow’. (Jane notes that Albert Einstein’s first wife, Mileva, named ‘physics’ as the co-respondent in her divorce proceedings.) In Cambridge in the 1960s, she writes, ‘The role of a wife — and possibly a mother — was a one-way ticket to outer darkness.’

The talents of the women around her had been ‘spurned by a system that refused to acknowledge that wives and mothers might be capable of an intellectual identity of their own’. This is the hinterland in which a disabled man became a master of the universe; and that is why I call Hawking a misogynist. He may be a talented, or even extraordinary, physicist, but he was a very ordinary husband of his own space and time. He repeatedly refused Jane’s requests for more assistance caring for him. Would he have done more for her, if he could? I doubt it

Were Top Managers at Neslté Connected to the Murder of a Colombian Union Activist?
Democratic Teacher’s Front stand in Solidarity with Women Farmers #MahilaKisanDiwas
#India - Framed and Forgotten: The Fate of many Under Trials
#India - Bihar not alone in denying justice to dalits #mustread