What ‘Urban Naxals’? You are either a rural revolutionary or an urban activist

The clash between various human rights organisations and the government goes back a long way.

The phrase ‘urban Naxal’ shook the entire nation after the Maharashtra police arrested five people in connection with the Bhima Koregaon violence. Those arrested are well known social activists and professors. The police have called the arrested people urban Naxals.

Eminent personalities such as Shankha Ghosh, Ramachandra Guha, Arundhati Roy, Romila Thapar, Prabhat Patnaik and many other intellectuals, well known in India and abroad, have raised their voices against the use of the phrase ‘urban Naxals’ as well as the arrests. 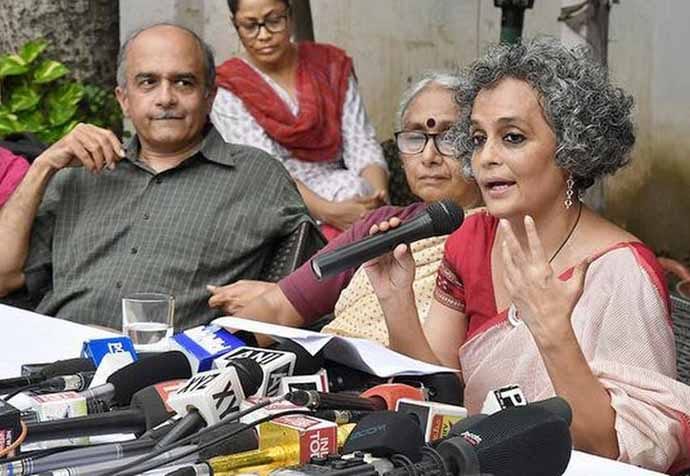 While the phrase has gained traction recently, the targeting of intellectuals with Maoist sympathises had begun, it seems, during the UPA regime when P Chidambaram was the home minister.

It was former Prime Minister Manmohan Singh who described Maoists as the biggest threat to national security.

The central government, under the Congress, had tried to make the Unlawful Activity (Prevention) Act, 1967 more stringent. The law was amended after the Mumbai terror attack in 2008. The amendment was aimed at broadening the definition of ‘act of terrorism’. Pointers like printing of fake notes and possession of illegal arms were also included within the scope of UAPA.

In 2012, the then central home secretary told the parliamentary committee that the UAPA was amended to empower the Financial Action Task Force to deal with cases of money laundering for terrorist activities.Coming back to the current case, charges of supplying money to Maoists have been framed against the social activists who have been kept under house arrest after Supreme Court intervention in the matter.

Under Chidambaram, the home ministry had prepared a list of people staying both in rural and urban areas who were believed to be aiding Maoists working as their front organisations.

The list even included human rights organisations such as People’s Union for Civil Liberties (PUCL). The name of CPI (Marxist-Leninist) Liberation, which contested elections, was also on that list. However, nobody was arrested during the UPA rule.

In the early 1970s, the Naxalite movement started to lose its grip. Finally, with the death of Charu Majumdar in 1972, the movement got divided into factions.

Following the footsteps of Charu Majumdar, Kondapalli Seetharamaiah formed People’s War Group (PWG). Like Majumdar, Seetharamaiah also depended on students and the youth to give momentum to the revolution.

This organisation discussed at length the weaknesses of the Naxalbari movement and why it failed. The most important point that emerged was that the movement lacked a mass base. Seetharamaiah felt that in order to give shape to a nationalist movement, a mass base had to be created. Thus organisations like Revolutionary Rights Association, Jana Natya Mandali, Radical Students Union, Radical Youth League and Raitu Coolie Sangham were formed.

In May, 1967, 18 people, including women and children, died when police opened fire in Naxalbari (a place near Siliguri in north Bengal). In retaliation, farmers killed a police official named Sonam Wangdi with bows and arrows.

The United Front was in power in Bengal back then, thus no revolution could have been fruitful. But the students hoped that the government would take notice and do something for the people.

After the Naxalbari incident most of the students left Student Federation and joined the farmers in their protest. Another faction of the Student Federation came into being. Majumdar started gaining a wider following with slogans like “give up studies and join the revolution”, “those who read more get more illiterate”. The slogans motivated the students. Naxalbari, a remote village in West Bengal, which gave birth to a people’s movement in 1967. (Source: Twitter)

Almost 90 per cent of the students belonged to the urban and the semi-urban areas. Hence, since its very inception urban Naxals had a significant role in the Naxalbari movement. However, the biggest fallacy was that the students who had joined the revolution had no or very little knowledge about the rural areas and the condition of the farmers. Thus, very soon the revolution lost its momentum. Currently, those who have been referred to as urban Naxals are not students and are well established in their own fields of work.

The Naxalbari movement lost its direction as it did not have the right political orientation. That is why the movement ceased.

Apart from the people of his own outfit, other Naxal leaders such as Kanu Sanyal, Sushital Roychowdhury and Saibal Mitra and others criticised Majumdar’s modus operandi.

Taking those criticisms in consideration, Seetharamaiah drew up a strategy to launch an armed rebellion to capture power.

However, in order to walk the path a strong mass base was required. It was decided that the Naxals would work towards popularising the movement and gathering mass support in the urban areas.

Keeping that in mind, Chidambaram concentrated more on human rights organisations. Though they were not directly labelled as urban Naxals, still they were always on central government’s radar.

While covering Left politics, I have realised that these organisations though have supported the cause of the Naxals and fought for their rights, they never supported their violent ways.

I feel that it is justified to fight for the protection of tribal lands, forest and water resources and also for the tribal wage system but they should not be encouraged to turn into mass enemy.

It is not possible for any intelligent person to believe that in a diverse nation like India, the citizens would gather themselves under one political umbrella and fight against the nation.

A person who believes in it and propagates the philosophy cannot be an intelligent person.