‘Whataboutery’ will not work in Covid times

Feeling socially distanced? Blaming past/ other governments for all present ills may cut less ice than before

Even before the listlessness of the lucky hit some of us prior to lockdown being eased, a friend and I started exchanging made-up ancient proverbs. One of them was the ‘Chinese aphorism’: when there is no grass left to burn, the fire starts to sputter. 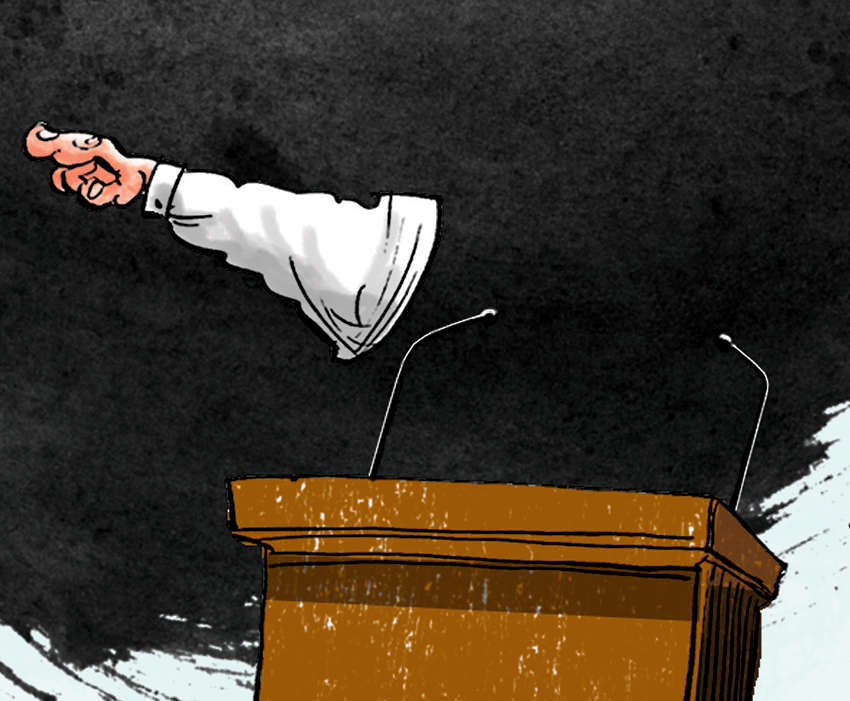 Four years before India is scheduled to go to Lok Sabha polls, this government finds itself frustratingly low on fresh turf to consume. This may seem an odd observation, bordering on the silly, considering any opposition on a national scale – whether  political, institutional or popular – seems to have succumbed to the government’s and ruling party’s thrall. But in this landscape, bereft of any real organised challenge, in its second year of its second term, this government may have come face to face with two formidable adversaries: chaos, and itself.

The first challenge is as formidable as it has been unscripted. Both the coronavirus gone viral, and the economic asphyxiation that the lockdown has left in its wake, may have eclipsed the economic downturn and its palpable effects like unemployment and sectoral slumps that had already set in before Covid-19 came to town. But even Covid-19 as the root of all necessary evil as a timely cloaking device for India being tossed about in choppy global economic waters – and its unpreparedness to ‘policy-dam’ it – seems to be malfunctioning.

Because, outside the economists’ surgical masquerade ball, it matters little to Indians what the causes of India’s current situation are. Its effects, and how to make them go away, do.

Which is where one comes to this government’s second antagonist: this government. The shamanic qualities cultivated by the prime minister, and invested in by enough Indians, may be running low on their steroidal powers. And a government that owes much of its power and charm to its optics – many a time at the cost of showcasing the actual good work it does – is finding exactly that optics a bit harder to sell.

Take what has, over the last three months, become the main national discourse. It sounds like good old whataboutery, looks like good old whataboutery, even smells like good old whataboutery. But whether it’s national media ‘ignoring’ the devastation caused by Cyclone Amphan that struck West Bengal, or outrage over the death of a pregnant elephant in Kerala while staying quiet over so many killings of other species (humans included), to feeling anguish for the murder of an African-American in the hands of a US policeman, but letting atrocities against so many Indians in the hands of desi cops slide, micro-skirmishes no longer are being fought along party political, or even ideological, lines. This is ‘apolitical’ hypocrisy-hunting.

‘Whataboutery’ – with its effective function of deflecting accusations to the ‘other side’ with counter-accusations – is, of course, still being bandied about. But Union home minister Amit Shah’s turning the blame for GoI shortcomings on opposition forces, Nehru’s successors and other fanged ‘n’ furry creatures in his ‘virtual rallies’ in Bihar, Odisha and West Bengal this week seemed as stale as the non-aligned movement. National concerns now are about castigating ‘other people’ for their apathy, hypocrisy or irresponsibility lying outside the pale of party politics. Such diffused ‘outings’ are not good for the politics industry – especially for its market leaders.

Concerns – genuine or otherwise – and actions now seem to have taken on a manufactured sheen to get government brand value up to ‘old normal’ again. Blaming past/ other governments for all present ills is cutting less ice than before, even for traditional supporters. This is partly because of the law of diminishing returns. And partly because Covid-19 has presented Indians with a common adversary, and a common set of administrators – central government, state governments, beat police etc – who don’t seem to know how to deal with this common adversary.

In this season of pandemic and economic drought, the ‘Chinese threat’ – however serious it may be – doesn’t quite measure up as an effective Mogambo to, say, ‘Pakistan’, ‘urban Naxals’ and ‘anti-nationals’ of the past. Some attempts seem to be on to return the anti-Citizenship (Amendment) Act or CAA issue to its rightful place: a pole around which a national political narrative can return to dance. Apart from Shah’s out-of-nowhere stab at Mamata Banerjee for her ‘anti-CAA’ stand last week, BJP leader Kapil Mishra claimed that anti-CAA Shaheen Bagh protests are ‘being planned again’, adding, ‘We have to be alert’. One can almost see him terribly miss those agitators, without whom much ‘pro-nationalist, pro-CAA’ fire in the belly is merely a flicker.

GoI, and BJP, are famished for some organised ill-wishers to feed off. What they could do now with are some palpable rallying points. Whether the Delhi district court denying bail to anti-CAA Jamia student Safoora Zargar (based on Delhi Police citing an unnamed ‘secret informer’ in its FIR), or the National Investigation Agency (NIA) substantiating its charges under the Unlawful Activities (Prevention) Act and for sedition against Bittoo Sonowal, aide of Assam-based RTI activist Akhil Gogoi, for using words like ‘comrade’, ‘lal salam’ and – horror of horrors! – a picture of Lenin on Facebook – can actually get those ‘Left liberals’ out again in lockdown eased streets so as to perk up ‘nationalist’ concern is yet to be seen.

Social distancing is one thing. Being socially distanced from one’s popular support system is quite another. But as our made-up Confucian saying goes: when birds disappear, it is not the farmer but the scarecrow that worries.