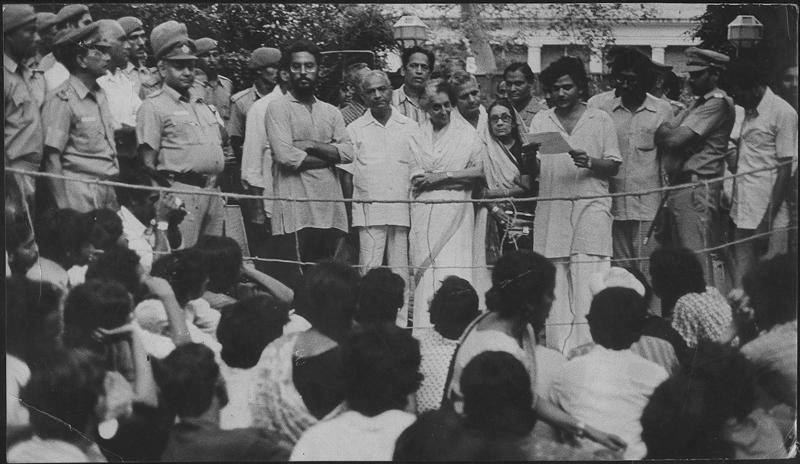 A glimpse from history: Comrade Sitaram Yechury as a student leader in JNU reading the memorandum presented by students on September 5, 1977 to Indira Gandhi, demanding her resignation as chancellor of the university. (HT file photo)

Sitaram Yechury as a student leader in JNU reading the memorandum presented by students on September 5, 1977 to Indira Gandhi, demanding her resignation as chancellor of the university. (HT file photo)

Sitaram Yechury’s best performance as JNU Students’ Union (JNUSU) President that I remember was to force Smt. Indira Gandhi to step down as JNU Chancellor, which she had continued to remain even after her defeat in 1977 elections.

We JNU students had already forced Dr. B D Nagchaudhary to resign as Vice Chancellor, [and] a 500+ strong demonstration led by Sitaram Yechury had walked from JNU campus to Indira Gandhi’s residence in the afternoon.

After 10-15 minutes of strong slogan shouting against the “Criminals of the Emergency”, Indira Gandhi, accompanied by her notorious Emergency-time Home Minister Om Mehta and two more walked up to the gate briskly. I must say I was impressed by her imposing but pleasant looking personality. She was smiling and listened to the slogans for a while. Then, Sitaram Yechury started reading the JNUSU’s demands. He read it in a most effective style for which he is known for, in impeccable English. The very first paragraph listed her government’s crimes against the people during the Emergency, described in most graphic detail.

Within moments her smile disappeared giving way to annoyance, she could not listen to the memorandum completely and walked back to her residence inside with an angry face, with her four minions behind, as briskly as she came. Slogan shouting continued and speeches as well. The memorandum was left there and the very next day, she resigned as chancellor of JNU!