That the Tamil superstar is a self-declared atheist is a footnote to this glaring bias from a major Indian daily.

An opinion piece which questioned Kamal Haasan’s right to criticise Mahabharata, because (it assumed that) the actor is a Muslim who must first address triple talaq in Islam rather than accusing the “Hindu epic” of sexism, has been widely panned on social media.

The article in Financial Express by a Manika Gupta has had lines removed from it since then, that allude to Kamal Haasan being a Muslim, but screenshots and comments that quote the whole paragraph, have flooded Twitter since then.

Not Satire. Instead of agreeing to disagree, @FinancialXpress declares Kamal Hassan as ‘anti-Hindu‘ in its news. http://www.financialexpress.com/india-news/is-kamal-haasan-anti-hindu-does-he-even-know-what-he-is-talking-about/603025/ …

Gupta says Haasan has not exercised his freedom of speech responsibly because “the comment is unwarranted as it relates to a mythological figure that many Hindus have respect for”. In the beginning of her article, Gupta says: “Kamal Haasan loves to be in controversies. But attacking Draupadi as being a pawn is against the dignity of Indian women.”

Further, Gupta writes: “Kamal Hasan [sic] has forgotten the context and the times in which Draupadi lived. Mahabharata is one of the most time-tested epics in the world, it is modern in its context. Not that Kamal Haasan talking against it will take away the credit that Mahabharata has but should the actor be pronouncing such judgments in the first place?”

Isn’t it amazing that Gupta at once venerates Draupadi as a “mythological” figure, and then breathlessly goes on to claim that the “context and times in which Draupadi lived” do not give Haasan the right to be “pronouncing such judgements in the first place”?

That’s some serious conflation of directly opposing claims. Gupta needs to make up her mind if she considers Draupadi to be a mythological or a historical figure. Perhaps, it doesn’t matter when propaganda is the main objective, and not a reasoned, informed analysis.

And the deleted paragraph, which has been since screenshot and preserved for posterity, and should get a pride of place in the annals of fake news, read thus:

“He is not only inciting enmity between the two groups but also forgetting that his own religion has instances of worst condition of women. He should focus on triple talaq and issues like that rather than bothering about one-off reference in the Mahabharata. Only if he could mind his own business!” 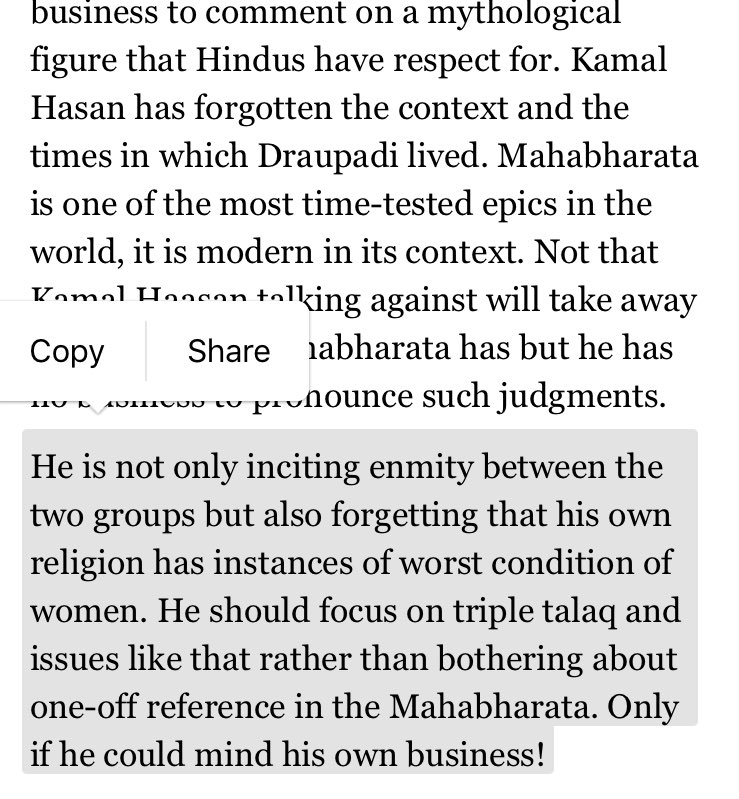 / @FinancialXpress this piece of absolute garbage you published assumes @ikamalhaasan is Muslim! Check your bigotry and who you publish!

It seems the writer has taken inspiration, or may be has inspired, a “spiritual leader”, Pranavananda Swami from Karnataka’s Basaveshwara Mutt, to file a complaint against Haasan for the actor’s alleged insulting remarks in Mahabharata, and demand an apology. 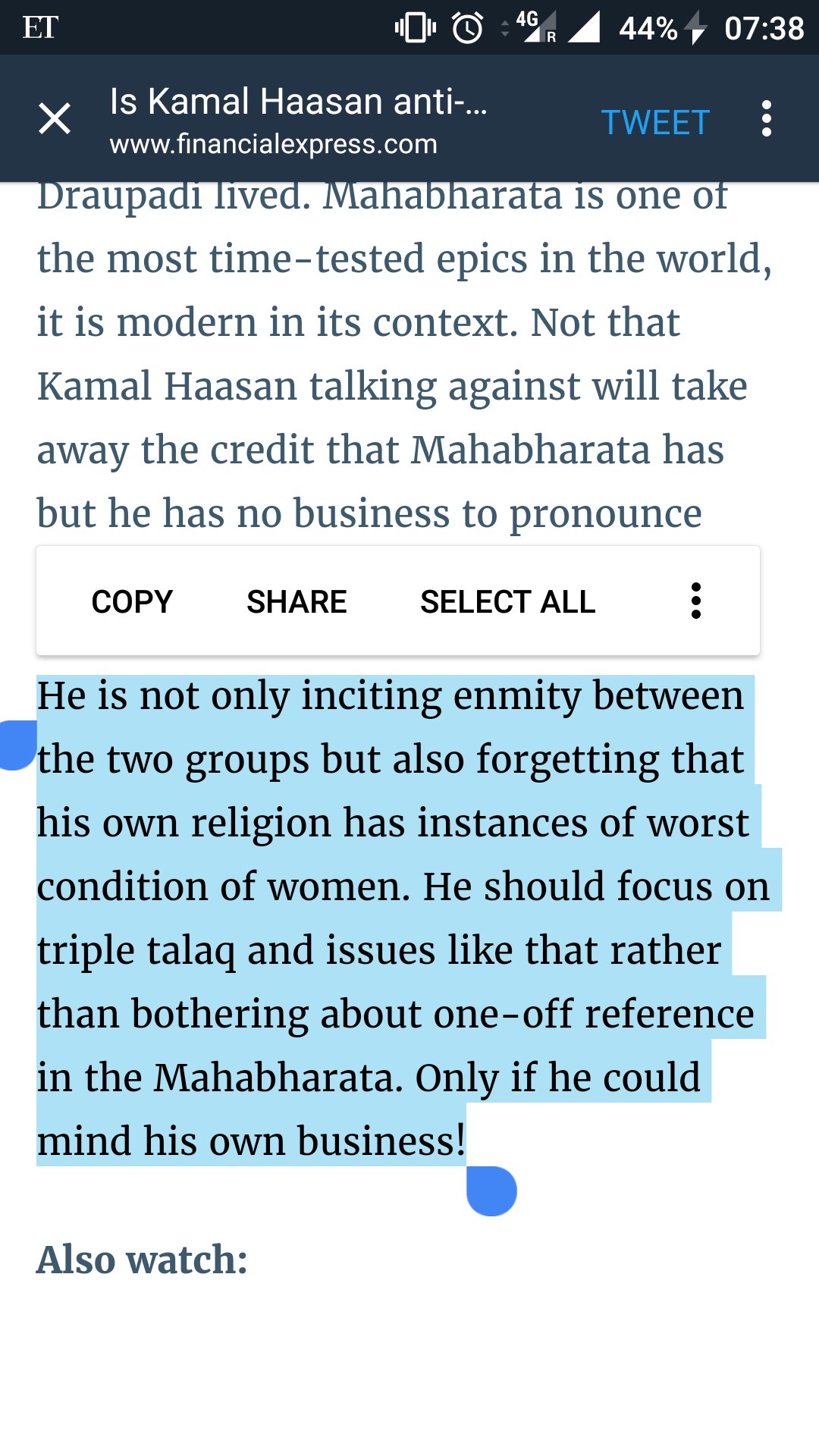 Slow clap to @FinancialXpress that assumed Kamal Haasan is a Muslim cos he called out Mahabharata. #AmitMedia

Gupta herself reminds us that “police had lodged a complaint against Haasan by Hindu Makkal Katchi on March 15 at the Chennai City Police Commissionerate for his alleged derogatory remarks about Mahabharata”.

Monday morning banging the head moment. When this self-important writer assumes #KamalHaasan is a #Muslim: http://www.financialexpress.com/india-news/is-kamal-haasan-anti-hindu-does-he-even-know-what-he-is-talking-about/603025/ …

Now let’s break down the claims and premise of the arguments, and the rabid misinformation since retracted minus a corrigendum, presented as a veritable op-ed in a major English daily.

First, the claim that criticising Mahabharata’s treatment of Draupadi, that is criticising the fact that a revered epic shows a woman being pawned and gambled away, is equivalent to criticising Draupadi herself.

In fact, it’s exactly the opposite.

Little wonder that retellings of Mahabharata which are Draupadi-centric, such as Mahashweta Devi’s Dopdi, and or the 20th century classic Yuganta by Irawati Karve, haven’t been exactly welcome by the Sangh Parivar, which seeks to preserve a Hindu martial male narrative of Mahabharata.

Secondly, the ridiculous and the most outrageous inference that any criticism of Hinduism or a Hindu epic must stem from someone who’s not Hindu, is plainly the reason why this piece of writing is so egregiously difficult to digest.

Not only did the writer assume, falsely at that, that Haasan is a Muslim taking potshots at a Hindu epic, she also betrayed the debilitating stereotype that no insider criticism of Hinduism and its epic is really legitimate. Or, that every criticism must have an ulterior motive of demeaning Hinduism and conversely glossing over or indeed glorifying a rival religion, Islam in this case.

When a main stream newspaper like @FinancialXpress prints #FakeNews & imagines Kamal Haasan is a Muslim, you know it’s trouble.

Let’s first look at the piece of blatant falsehood in the story. Kamal Haasan is not a Muslim: he’s a born Tamil Brahmin who is a self-declared atheist. If the writer cared to read up a little before she furiously started typing out her own ingrained biases against Muslims, many religions, and indeed Hinduism, have a longstanding tradition of atheism and insider critics.

Does FE even know of the rich tradition of Hinduism in South India, which debates everything including the Gods?
http://www.financialexpress.com/india-news/is-kamal-haasan-anti-hindu-does-he-even-know-what-he-is-talking-about/603025/ …

In other words, criticism of Hinduism and “Hindu epics” isn’t anti-Hindu. Just like the criticism of the government isn’t anti-national, but we’re digressing. But are we, given that a secular democratic India is being re-engineered into a Hindu Rashtra through the sick logic of electoral Darwinism?

Move over http://postcard.news  & OpIndia. You have some serious competition. http://www.financialexpress.com/india-news/is-kamal-haasan-anti-hindu-does-he-even-know-what-he-is-talking-about/603025/ …

Of course, Kamal Haasan’s atheism and his wonderfully contrarian approach to life, politics and cinema, has always kept the public sphere guessing. At a time when atheism is under attack from Hinduism, Islam and even Christianity in India, Haasan has questioned the existence of god through his films such as Anbe Sivam and Dasavathaaram.

@samjawed65 This is just North India discovering Kamal Hassan late as usual. He’s always been publicly atheist & edgy for a long while now

Haasan had even been stopped by US authorities at Toronto Pearson International airport in 2002, so this Islamophobia of which he has been a recurrent victim, is truly transnational. But, in this case, finding the root of Haasan’s criticism in his mildly Muslim-sounding name (there’s the Sanskrit origin as well – Kamal means lotus, Haasan comes from haasya, or smile) is really betraying a no-holds-barred bigotry from the writer.

What does this indicate? This is the classic cocktail of misinformation fused inseparably with stereotypes that go a long way into the spread of fake news as a mainstream activity.

Indeed, by painting Haasan as a Muslim, this writer strangely claims that no Muslim has any right to criticise a supposedly Hindu epic, when nothing can be farther from the truth that intellectual freedom sees no border and no walls when it comes to scholarship.

European Renaissance wouldn’t have been possible if obscure monks hadn’t carefully preserved and surreptitiously translated Arabic texts and scriptures in the 11th, 12th and 13th centuries. Though Sangh Parivar detests Mughal dynast Emperor Akbar, his court remained one of the most secular in the history of India, who actively encouraged cross-translation of Hindu and Islamic texts.

Kamal Haasan’s criticism of Mahabharata must be seen in the context of the growing culture of misogyny clubbed with a deranged dash at mainstreaming Hindutva. The least that should be expected of journalists at this delicate juncture is a strict adherence to facts as a sacred pillar of democracy.

Unfortunately, fake news is now a mainstream activity, as is WhatsApp journalism of the gaushala variety.