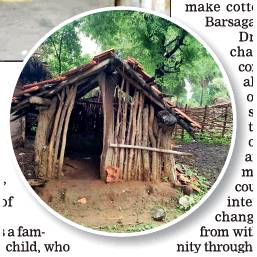 Practice of isolating those menstruating in mud huts is still alive in tribal areas of Maharashtra, and it’s claiming lives

It is an 8ftx8ft windowless mud room with no electricity that is Vaishali Padmukh’s home for four days every month. Every time she gets her period, the 37-year-old resident of Sitatoli village in Gadchiroli district is banished to a ‘period hut’ known as kurma ghar or gaokar in local lingo. Located on the outskirts of the village, the hut is where Vaishali must eat, sleep, bathe and get through her day. She says, “We tie a sari or make a banana leaf shelter to create a space that we use as a toilet and for bathing. When it rains, the hut is filled with water.’’ These unsanitary conditions combined with unhygienic menstrual practices — many women use strips made from mahua leaves covered with paddy chaff as pads — often cause infections, illnesses, and sometimes even death. At least eight women have died since 2011 during this enforced seclusion in Gadchiroli alone, says a representative from a local NGO Sparsh. While some succumbed to pneumonia, others fell prey to snake bites. In November 2017, Jayanti Baburao Gawade, was found dead in a kurma ghar at Ettapalli, Gadchiroli district. The 47-year-old had high blood pressure and fever when she was forced to go to the period hut. In the morning, her family found her dead.

Besides Tamil Nadu where the practice of isolating menstruating girls led to the death of 14-year-old S Vijaya during cyclone Gaja last week, the Madia and Gond tribes of Gadchiroli and Chandrapur in Maharashtra, Bastar in Chhattisgarh and parts of Andhra Pradesh also treat menstruation as a social taboo.

Tribal women say they are helpless against age-old beliefs. Those who resist are brought before the panchayat and asked to cook a meal of chicken for the entire village and buy liquor for everyone. “It is better to obey and somehow pass these four days otherwise we have to feed the entire village,” says Vaishali Padmukh.

The nights are especially scary in the hut, says Kavita Alaam who is in her 20s. The ramshackle door provides little protection against wild creatures. “The entire night I sit and pray for daylight,’’ says the resident of Rekhatoli village.

The only contact is a family member, usually a child, who comes to drop a tiffin of food but water to bathe or drink is always in short supply. Often women take their small children along.

In 2011, NGO Sparsh did a survey of 200 kurma ghars in five talukas of the tribal district and prepared a report on deaths due to this forced isolation. Sparsh president Dilip Barsagade says, “We submitted our findings to the government but it was wary of touching this issue.”

In 2013, Sparsh submitted its findings to the National Human Rights Commission, which asked the state health secretary to ascertain the facts. But again, says Barsagade, there was no action on the ground.

The NGO then started a pilot project in five villages in 2015. Ten groups of girls aged 13 to 19 years and women aged 20 to 50 years were formed to create awareness about menstrual hygiene. A booklet was prepared, containing information about the menstrual cycle and how women need physical and mental care during this time. “Our volunteers had baithaks to educate women. Though this was making an impact, there was resistance from the men and from 2015 onwards, we decided to stop telling women not to go to the kurma ghar as it began to hinder our other work. So we began to create awareness about sanitary napkins and taught them to make cotton pads,” says Barsagade.

Dr Abhay Bang, chairman, expert committee on tribal health, points out that the Constitution guarantees protection of tribal customs and any government intervention could be viewed as interference. “The change has to come from within the community through its younger and educated members,” he says.

District collector Shekhar Singh says a programme has been launched to promote awareness about menstrual health, and use of sanitary pads. “In the second stage we will involve women selfhelp groups to start conversations around the issue of Kurma ghar and bring all stakeholders on board before finally taking a decision on it,” the collector adds.

Meanwhile, the administration has built a concrete kurma ghar with toilet and electricity in Girola village in Dhanura taluka. Megha Korchey, a class XII science student, questions this approach which forces her to do time in a kurma ghar every month. “A concrete structure can be built, but an ugly custom which treats women in such an inhuman manner cannot be eradicated,” she says.

Farmers of Bujbuja Village warn the Govt. ; Funeral pyres set up for self-immolation
Chhattisgarh Govt. cornered over ‘encounter killing’ of Bastar students
Janmorcha -Chalo Delhi- Our Country is not for Sale- Aug 21
Why Trade Unions Are Opposing Labour Law Reforms