Whitewashing Pachauri – why the Guardian is Wrong

HARINI CALAMUR – As i was reading this piece on Pachauri, i could feel the smoke coming out of my ears. What kind of an idiot commissions such a one sided piece, and shames the victim of sexual harassment ?

Pachauri, who is accused of stalking a woman with poetry, love messages, and physically groping her whenever possible, has a freepass in the Guardian, the alleged bastion of women’s rights, where he accuses her of being paid off by the climate denial lobby. He claims that she ‘hacked’ into his account to send her self mails, over a 15 month period, so that she could implicate him in a sexual harassment charge. He also claims that she was the one who was pursuing him.

“What is disturbing [is] that right from the first day over a period of about 16 months she was creating and assembling an archive of messages, which to anyone would seem very unusual. As far as I know, the emails, text messages etc that she collected were personal, semi-personal and only in a few cases official….. I was, during that period, extremely busy and carrying out email communications on six different email accounts. These included my Yale, IPCC, Teri official, Hotmail as well as Gmail accounts. I generally corresponded with her on my Gmail account, but since I had a huge volume of messages to deal with I did not frequently read my messages, except when I was alerted about a message waiting for me. When I did access this account, I would only read unread messages. Honestly, how many of us check our sent items regularly?”

I am also assuming here, that she took control of his hands, brain, mouth  and eyes —  everytime he got near her.

“On many occasions, Dr Pachauri forcibly grabbed my body, hugged me, held my hands, kissed me and touched my body in an inappropriate manner,” she told police

And, she also waved a magic wand, so that everytime he was in range – his personal mobile phone began spewing out SMS’s and Whatsapp messages to her.

I see the need to counter the powerful anti climate change lobby. But, not at this cost. A woman who has been hounded at work by a man old enough to be her grandfather; out of work by a lobby of powerful friends of Pachauri, is now hung out to dry by a newspaper that should know better.

In India, like elsewhere, women at the workplace are afraid to report sexual harassment, because they will be seen as the troublemaker; the one who wont take it on the chin, like a man, for the good of the organisation. The easiest thing to do in a scenario like this, is to shame the victim so that others don’t speak up. The Guardian has set the cause of equality of women at the workplace back, by giving space to a powerful man to present ludicrous claims as facts.

I have been reading the Guardian for the last 25 odd years. And, yesterday, when I read this piece, I was truly disappointed. Truly. 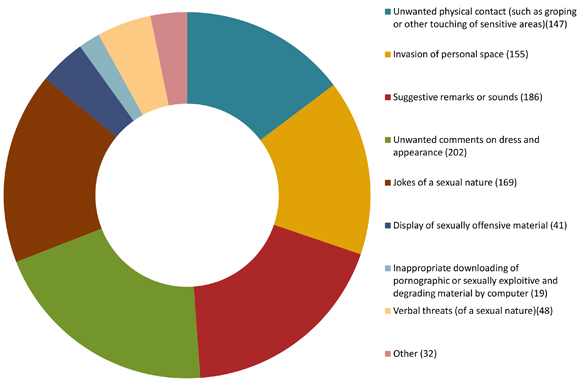 (source : International Women’s Media Foundation) – almost 48% of those surveyed said they had experienced sexual harassment. The bulk of the rest were either in denial or didn’t want to rock the boat)>http://calamur.org/gargi/2016/03/28/whitewashing-pachauri-why-the-guardian-is-wrong/