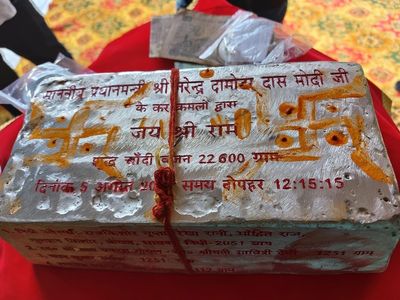 Sixth December, 1992 – the day India lost its secular character and opted for majoritarionism as its ruling philosophy. The quilt of India made from its myriad beliefs, religions, languages, customs and traditions was torn to shreds by an insane crowd of zealous fanatics egged on by a short-sighted selfish leadership of Bhartiya Janata Party (BJP) and Rashtriya Swayamsevak Sangh (RSS).

It was a day of mourning, never to be forgotten, written in history of this country as an act of repudiation for all that this nation had stood for – a nation for all its population despite the differing beliefs.
Fifth August, 2020 – the day we put a final seal of approval on our denial of this nation, whose idea encompasses sympathy, humility and brotherhood towards all.
What we have is a country for devout Hindus. All others should accept the same no matter what they have falsely believed in so far. Indeed, the bhoomi pooja by our elected Prime Minister signifies that this is Hindu religion that gets priority over all other beliefs and the rest will be given second class status in our scheme of things.
It’s almost like saying that you be a devout Hindu or seek solace in some other country. One wonders if this is the same Hinduism that Gandhi, Ramkrishna, Vivekanand, Tagore preached. Where is the sympathy, sensitivity, non-violence, humility of Hinduism which welcomes all faiths and beliefs to co-exist peacefully in a world created by the Almighty?
Does Hinduism become superior by killing of other non-believers? Did Emperor Ashoka become great because of Kalinga war or he is greater still because he embraced non-violent Buddhism? Do we as a people become famous by shouting Jai Shri Ram or we need to embrace people of all diversity to create a peaceful world? Today daggers are drawn, non-Hindus are threatened, liberal Hindus are persecuted, Muslims and Christians are a foreign entity, who had wrongly invaded our shores, and we must act fast enough to create a Hindu paradise.

Did Emperor Ashoka become great because of Kalinga war or he is greater still because he embraced non-violent Buddhism?

Fifth August, 2019 – Another black day for this country when we abrogated Section 370 for Kashmir and downgraded the paradise of Kashmir into two Union territories – all by an autocratic nation calling itself a democracy. The significance of August 5, being also the day of Bhoomi Puja of Ram Mandir in Ayodhya, cannot be lost on a heady population which considers Kashmir subjugation and Ram Mandir construction as two pillars of enactment of Hindu majoritarianism.

The choice of August 5 – the day the Muslim majority Kashmir was “taught” a good lesson – as the day of Ram Mandir is not a coincidence but a well thought out programme to subjugate the Muslim minority to the wishes of Hindu majority.

Gandhiji’s lessons and preachings that it is the duty of the majority to protect the minority has been thrown to the winds and going to Rajghat on October 2 and January 30 has become a fashion to fool the public about our commitment to non-violence.

Mother India cries out for peace and amity among all its population and appeals against divisive tendencies so rampant and being promoted in the country today. Hopefully saner minds will prevail and the Hindi-Muslim fabric of our multi-coloured quilt, so rich in inter-culture relationship in novels, art, music, etc. will remain intact for future generations to enjoy.

The threat to and silencing of minority will continue unless we as a nation realise that India’s greatness lies in its diversity of religions, languages, traditions, customs, etc. All of us have benefitted immensely by this cultural potpourri. Let us not copy the American way by becoming similar in all respects in food habits, in religion practices, in dress, in thinking.

We are a nation of many varieties and opinions and the openness of the society which welcomes criticism is the bulwark of real democracy.
—
*Convenor, Jharkhand Nagrik Prayas, Ranchi