Why and how we make election endorsements

Why and how we make election endorsements 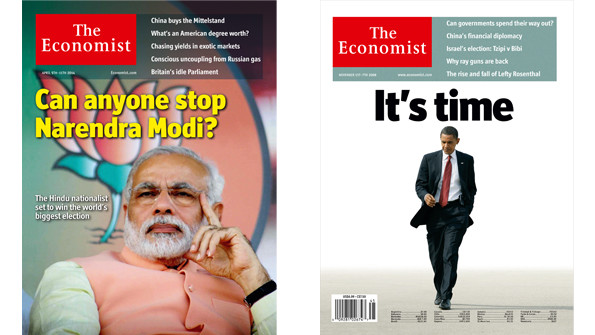 The Economist hopes that Narendra Modi, India’s new prime minister, will reform his country’s economy and help his impoverished countrymen. But we did not support him in India’s election: we worried that his Hindu nationalism would prove divisive and dangerous. Among our Indian readers this opinion was, to say the least, controversial—not just our verdict but the fact that we advanced it at all. We ought, some readers told us, to mind our own business (or words to that effect). We should refrain from such neo-imperialist intrusions into other countries’ affairs; we are, after all, based in London, not Delhi.

An equally pertinent objection might be that we are a newspaper, not a person, and have no right to vote anywhere, including Britain. All the same, by longstanding tradition we frequently offer endorsements of our favoured candidates in important elections. The tradition is more longstanding for some countries than for others: it stretches to the 1950s for British general elections but only to 1980 for the United States (with gaps in 1984 and 1988). For other countries the practice is more recent and sometimes irregular; still, we have endorsed parties or candidates in national elections in France, Germany, Italy, Turkey, Australia, Canada, Egypt, Israel, South Africa, Mexico, Brazil and Chile. Occasionally we have offered views on referenda and local elections, too, such as the mayoral contests in London and New York. Beyond Britain and America, we tend to pronounce on races where there is a competitive field and a lot at stake, normally because we believe one of the main candidates would be either redemptive or disastrous. In autocratic places where elections are a charade, such as Russia, we see no point in endorsing anyone.

We do not think this habit is presumptuous or neo-colonial. After all, The Economist routinely writes about the politics and economies of all of these countries, both in our reporting and our leader section; it seems coy to affect indifference when their elections come around. We do not expect all of our eligible readers to follow our advice—and we aim to provide enough impartial analysis for them to make up their own minds—let alone that our opinion will sway the outcome. We fail to get our way on many issues, from America’s gun laws to the legalisation of narcotics, but we advance those views nevertheless. In most cases we select one of the plausible winners, considering it quixotic to nominate a rank outsider: like most voters we choose between the actual candidates rather than ideal ones. Our support is sometimes grudging (as it was for Barack Obama in 2012, though not in 2008), a recommendation of the least bad option rather than an actively appealing one. Again, we think this reflects the grim, real-world dilemmas that voters tend to face.

Our record is not partisan: in party-political terms, we are erratic. In Britain we have often preferred the Conservatives, but switched to Tony Blair’s Labour Party at two general elections. We backed George W. Bush in 2000 but ditched him for John Kerry in 2004. Our methodology, however, is consistent. The Economist’s basic creed—which promotes  free markets, small government and social liberalism—provides part of our criteria, but so does a pragmatic reckoning of which candidate is likely to better his compatriots’ lot. In that judgment an incumbent’s past record counts for less than his likely impact in the future. Occasionally there is a moral consideration, too, as in the (very different) cases of our opposition to Mr Modi and to Silvio Berlusconi. Ultimate responsibility for these choices always rests with the editor, but opinions are solicited from the entire editorial staff, which usually supplies several correspondents with relevant expertise. Sometimes the resulting endorsements turn out to be misguided: like actual voters, we are only human. But they are always made with the interests of those voters, be they British or Indian, American or Egyptian, in mind.

Dig deeper:
India deserves better than Narendra Modi, a man still associated with sectarian hatred (April 2014)
America should take a chance and make Barack Obama the next leader of the free world (October 2008)
Forget the hypotheticals and look at the policies: the Conservatives deserve to govern Britain (April 2010)