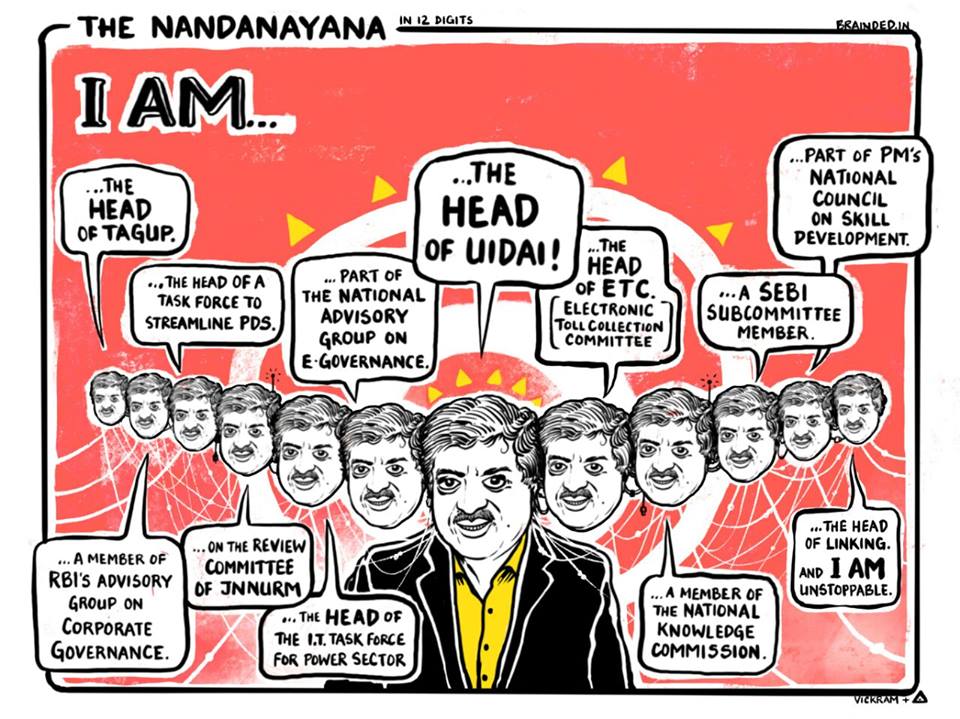 This is to inform you about why the civil Liberties activists walked out from the Sixth Justice VM Tarkunde Memorial Lecture because Shri Nandan Manohar Nilekani was chosen to deliver it on November 23, 2012.

While delivering his welcome address while introducing the legacy of Justice Tarkunde, the stalwart of civil liberties, Kuldip Nayar, veteran journalist and former ambassador underlined that the democratic space is shrinking and had Justice Tarkunde been alive he would have opposed centralized databases like Union Home Ministry’s National Population Register (NPR) and Centralized Identities Data Register (CIDR) because it is an assault on civil liberties and human rights.

It is noteworthy that Shri Ashok Desai, a Senior Advocate who was on the dais to introduce the Speaker also raised the issue of the fear of an emerging Orwellian situation where a Big Brother watch on everybody drawing from George Orwell‘s book 1984 that taught us that an all-knowing corrupt government is a terrifying situation.

The walk out was a protest against Shri Nilekani being invited to deliver the lecture in memory of the stalwart of human rights and civil liberties, Justice Tarkunde. The UID project has been challenged since its inception. The activists who walked out of the lecture have repeatedly tried to engage with Shri Nilekani at various public platforms but he has consistently declined to answer their questions or enter into any discussion with them.

The organizers rushed and tried to take back the papers but several members of the audience refused to hand over the papers. As the activists walked out, the organizers termed the peaceful and silent distribution of the Statement of Concern on UID as ‘trouble’. After the program, many members of the audience who came out after hearing the lecture revealed that it was not at all convincing.

Most respectfully, we are submitting ten questions for your consideration:

1.   Why do we need Unique Identification (UID)-Aadhaar Number as a 16th identity proof which in fact is an identifier and not an identity proof. Hasn’t linking of cash transfer with UID made it mandatory contrary to its continued claim that it is voluntary?

In the beginning, it was said that the UID would be voluntary. Now, it is creeping into becoming mandatory, with the threat that those who don’t have a UID cannot access services of many kinds, including rations and bank accounts. How does NN see the implications of this creep for civil liberties and the rights of the people?

2. Why present and future Indian citizens should be allowed profiled based on biometric data? Are citizens worse than prisoners? The indiscriminate collection of biometrics of prisoners is not allowed as per Identification of Prisoners Act.

Countries such as the UK, Australia, the Philippines have rejected identity projects that closely resemble the UID project because of its civil liberty implications, the prohibitive cost, the untested technology and because it will make the people subservient to the state. What is the reason for thinking that Indian citizens can bear these risks and costs?

4.  How can UIDAI and UID project be deemed legitimate if it has been disapproved as violation of the prerogative of the Parliament by Parliamentary Committee on Finance

The Parliamentary Committee on Finance, in December 2011, roundly disapproved of the proposed Bill and the project. The government has not come up with a revised law, and there is in fact no law that, today, governs the project. Isn’t the protection of the citizen by law important?

5. Who will be held accountable for violation of citizen’s privacy law and data protection?

The UID project poses a threat to the privacy rights of citizens, and Shri Nandan Nilekani has acknowledged that many times over. Yet, the project is steaming ahead without any law on privacy in place, and is believed to be breaching many privacy principles. How is Shri Nandan Nilekani addressing this in his project as project leader?

6. If violation of confidentiality promised in the Census Act is done with impunity, how can census like UID exercise be trusted?

7. What is the guarantee that whosoever controls Centralized Database of Indians will not become autocrat like Hosni Mubarak who handed over citizens’ database to US Government?

There is an extraordinary dependence on corporations, many of them companies with close links with foreign intelligence agencies. How are the implications of this factor being dealt with?

The ubiquity that the UIDAI is trying to get for the UID — where it will be linked with the National Population Register, and service such set ups as the CCTNS, the NCTC, the NATGRID– where are the protections for the citizen from an invasive state?

10. Who will guarantee that the centralized database of UID, NPR will not be used for holocaust, genocide, communal and ethnic riots, targeting of minorities and political dissidents?

Why is technology treated as if it has no politics, or no civil liberties implications, when we know that it most certainly does?

As a background to the goings on around UID related developments, we wish to draw your attention towards what Parliamentary Standing Committee (PSC) on Finance said about the Unique Identification (UID)-Aadhaar number project of Shri Nandan Manohar Nilekani, Chairman, Unique Identification Authority of India (UIDAI) who is helping create a Database and a Surveillance State based on illegal and illegitimate collection of biometric data despite explicit legislative disapproval.

In its report to the Parliament, the Parliamentary Standing Committee (PSC) on Finance has taken on board studies done in the UK on the identity scheme that was begun and later withdrawn in May 2010 when the proponents of ID project were defeated in the elections. The Committee took note of the problems like “(a) huge cost involved and possible cost overruns; (b) too complex; (c) untested, unreliable and unsafe technology; (d) possibility of risk to the safety and security of citizens; and (e) requirement of high standard security measures, which would result in escalating the estimated operational costs” in undertaking such projects.

We submit that the Parliamentary Committee has noted that the Central Government has “admitted that (a) no committee has been constituted to study the financial implications of the UID scheme; and (b) comparative costs of the aadhaar number and various existing ID documents are also not available.” In view of such glaring omissions, the Parliamentary Committee denounced the UID/aadhaar project as `unethical and violative of Parliament’s prerogatives’ and as akin to an ordinance when the Parliament is in session.

It may noted that Supreme Court of Republic of the Philippines July 23, 1998 rejected the National ID program initiated by President Fidel V. Ramos on December 12, 1996 through “Adoption of a National Computerized Identification Reference System” in its 60 page judgment on two important constitutional grounds, viz: one, it is a usurpation of the power of Congress to legislate, and two, it impermissibly intrudes on our citizenry’s protected zone of privacy. In India, High Courts of Madras, Mumbai and now the Supreme Court are seized with the matter.

We submit that among many questions that have emerged, one is: Has Shri Nilekani, in rank of the Cabinet Minister taken the oath on Constitution of India to abide by its provisions?

It must be remembered that even Mahatma Gandhi opposed a law similar to UID as a Black Act in South Africa from 1906 to 1914 saying,”…I have never known legislation of this nature being directed against free men in any part of the world. I know that indentured Indians in Natal are subject to a drastic system of passes, but these poor fellows can hardly be classed as free men” and “…giving of finger prints, required by the Ordinance, was quite a novelty in South Africa. With a view to seeing some literature on the subject, I read a volume on finger impressions by Mr. Henry, a police officer, from which I gathered that finger prints were required by law only from criminals.”

In August 1906 the Asiatic Law Amendment Ordinance became law in the Transvaal. Any Indian who did not register by a certain date would no longer be allowed to stay in the Transvaal. This law stated that every Indian man, woman or child older than 8 years must register with a government official called the registrar of Asiatics. This registrar was to also take the fingerprints of the people he registered and issue them with registration certificates, which they had to show to any policeman who asked to see them. Notably, UID scheme too is based on biometric data like finger prints and iris scan.

It is noteworthy that PUCL had already disassociated itself from the Sixth Justice VM Tarkunde Memorial Lecture program because of wrong choice of speaker. In a letter dated November 21, 2012 to the human rights community, V Suresh, National General Secretary (Elect), People’s Union for Civil liberties (PUCL) said, “We had issued a statement where we made explicit that our opposition to UDIAI has not changed nor our continuing to oppose the UID project. We had also spoken to and followed by writing to the organisers informing our stand on UIDAI, that selection of a person like Mr. Nilekani is  contradictory to the very ideals that Justice Tarkunde’s  work and persona reflected, and therefore the demand for calling off the lecture as also that we did not want to be associated with the event.”

In view of the massive opposition to the proposed databases as the structural basis being laid out for future authoritarianism through despotic projects like UID, NPR, National Intelligence Grid (NATGRID), Human DNA Profiling, National Counter Terrorism Centre (NCTC), Land Titling Bill, 2011 and Public Information Infrastructure and Innovations, we invite the urgent intervention of the fellow citizens to boycott and oppose such illegitimate advances of the State at the behest of the ungovernable and unregulated foreign biometric and surveillance technology companies.

We submit that the collection of biometric data supports the ideology of biological determinism with its implicit and explicit faith in the biometric technologies. There are dangers of trusting such technological advances for determining social policies.

We submit that rewriting and engineering the electoral ecosystem with the unconstitutional and illegal use of biometric technology in a context where electoral finance has become source of corruption and black money in the country. This would lead to linking of UID, Election ID and Electronic Voting Machines (EVMs) which is not as innocent and as politically neutral as it has been made out to be. It is noteworthy that all EVMs have a UID as well.

We submit that the Parliamentary Committee on Finance on National Identification Authority of India Bill, 2010 (UID Bill) has already rejected the idea of biometric data based identification scheme for mankind’s biggest database ever and the UID Bill.

In the face of such attack on citizen’s sovereignty despite explicit legislative disapproval, support of informed citizens is urgently needed to safeguard civil liberties and human rights of present and future generations.

We will be happy to share relevant documents and information in this regard.

SAY NO TO UID CAMPAIGN

Jaipur- 17 Children Dead, More Than 2000 Suffering From Multi System Inflammatory Syndrome Due To CO...
1/3 of Gujarat's convicts are Dalits, which is highest in India
Frontline Journalist - Hate campaign launched in his name on Twitter
#India - Patna High Court acquits all 26 in Dalit massacre case #Injustice #WTFnews