Why Donald Trump can kinda, sorta say anything he wants

Donald Trump speaking at a rally in Fountain Hills, Arizona, on March 19, 2016. Photo by Gage Skidmore, Wikimedia Commons.SOON AFTER DONALD TRUMP KINDA, sorta implied on Tuesday that “Second Amendment people” could take up arms against Hillary Clinton, former CIA Director Michael Hayden slammed the GOP nominee’s remarks in memorable fashion on CNN: “You get to a certain point in this business, and you’re not just responsible for what you say. You’re responsible for what people hear.”

Trump obviously absolves himself of that responsibility—and his self-absolution is perhaps the fundamental quandary for journalists covering him. Whereas much of traditional political coverage centers on what candidates say, Trump has forced reporters into the awkward position of trying to evaluate what his supporters might hear. Exact phrasing doesn’t matter. In fact, Trump’s typical word salad provides something of a frontline defense against critical media coverage of his more ridiculous statements.

Take, for example, when Trump kinda, sorta implied after the Orlando nightclub shooting that President Obama was in league with ISIS. Or when he kinda, sorta implied that Ghazala Khan didn’t speak at the Democratic National Convention because Islam forbade her from doing so. Or any of the other conspiracy theories he kinda, sorta spews. Many people are saying these things, Trump often explains. You tell me.

The reality TV star’s genius lies in a simple trick: He raises ideas while at the same time distancing himself from them just enough to deflect criticism. He establishes some measure of plausible deniability—at least for those who take his statements at face value. Many voters see through this rhetorical ballet, but it poses problems for mainstream news organizations bound by journalistic norms.

The implication of Trump’s remarks on Tuesday seems clear in video recordings of his speech, but  far less so in text: “If [Clinton] gets to pick her judges, nothing you can do, folks. Although the Second Amendment people—maybe there is, I don’t know.” The ambiguity is endless.

“Clearly, you want to report what was said, and if you take it literally, it’s difficult to say, ‘Yes, [Trump] has called for her to be assassinated,’” says Jennifer Mercieca, a Texas A&M professor who specializes in American political rhetoric. “But how should you convey the meaning or implication of what he said? If you take it from that point of view, then yeah, it sounds like he’s saying people should assassinate her.”

Many major news organizations tread lightly in their description of Trump’s comment. The New York Times ran its front-page story under the print headline, “Trump suggests gun owners act against Clinton.” The lede begins: “Donald J. Trump on Tuesday appeared to raise the possibility that gun rights supporters could take matters into their own hands if Hillary Clinton is elected president and appoints judges who favor stricter gun control measures.”

While the Times did describe Trump’s remarks as a “violent insinuation” later in the story, it and other mainstream outlets let surrogates from both campaigns clarify Trump’s meaning for readers. Reporters’ own analysis of what Trump implied was largely relegated to cross-referencing his literal word choice with his campaign’s defense afterward.

[Trump’s campaign] insisted he was merely urging gun rights supporters to vote as a bloc against Mrs. Clinton….

But at his rally earlier in the day, Mr. Trump had actually been discussing what could happen once Mrs. Clinton was president, not before the election.

And even many in the audience seemed caught by surprise. Video showed a man just over Mr. Trump’s shoulder go slack-jawed and turn to his companion, apparently in disbelief, when Mr. Trump made the remark.

Guy behind Trump immediately realized what he said was a problem.

Points for trying—and it goes without saying that Times readers can likely see through this charade, if they haven’t disavowed Trump already. Still, Mercieca adds, “It’s very difficult to derive meaning from what he says.” Trump instead forces mainstream journalists to dance along.

In a March article for The Conversation, Mercieca argued that Trump largely relies on the use of “paralipsis, a device that enables him to publicly say things that he can later disavow—without ever having to take responsibility for his words.” When Trump retweets white supremacists, for example, he doesn’t technically say those retweeted words to his 10.8 million followers—even if they get the message. There’s daylight for a Trump denunciation later on. As Mercieca sums up the rhetorical device: “I’m not saying; I’m just saying.”

“It’s brilliant,” she adds. “It’s all designed so that he cannot be held accountable.”

By defying this basic convention of journalism—that politicians canbe held accountable for the words that come out of their mouths—it’s easy for Trump to frame critical coverage as a witch hunt. His campaign immediately put out a “statement on the dishonest media” following his remarks Tuesday, touting them instead as a call for political action by gun rights supporters. On Wednesday, the campaign circulated similar talking points, which The Wall Street Journal’s Reid J. Epstein shared on Twitter: 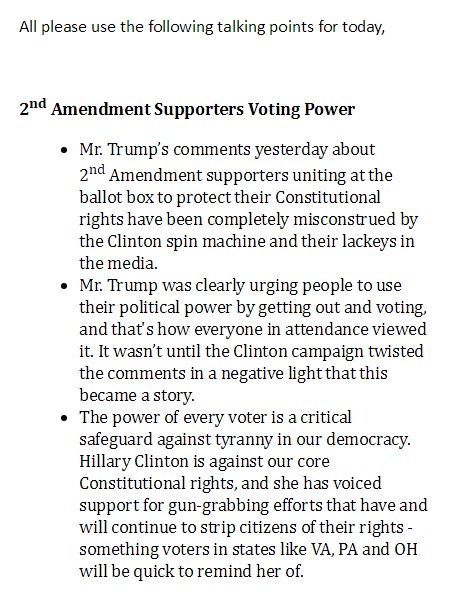 Trump surrogates and apologists quickly proceeded to push those counternarratives, reveling in yet another opportunity to bash “the dishonest media.” But perhaps the most telling response came from campaign spokeswoman Katrina Pierson. When CNN’s Jake Tapper asked, simply, “What exactly was Mr. Trump saying?” her response was laughably on-message: “Mr. Trump was saying exactly what he said.”

Exactly. Trump does his dance, dripping spray-tan-colored paint over the American political canvas in a campaign of abstract expressionism. It’s up to reporters to derive meaning from words Trump himself implies are meaningless. A steady hand will be key in deciphering Trump’s intentions going forward. His campaign is faltering, and it’s likely that he will only flail more violently as it continues struggling to settle into an autumn rhythm.