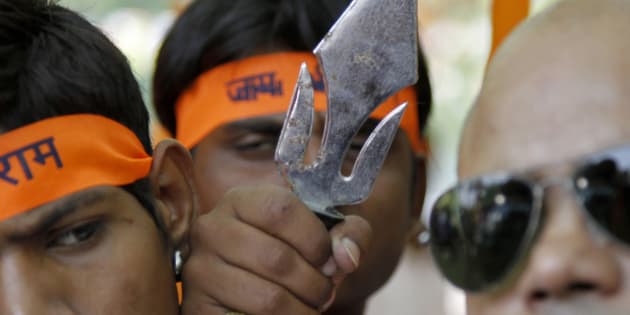 B MATHUR / REUTERS
Members from the hardline Hindu groups, Bajrang Dal and Vishwa Hindu Parishad (VHP), hold a trident during a protest in New Delhi May 9, 2011.

A Haryana court has just issued a non-bailable warrant against Baba Ramdev for telling a public gathering last year that he could “behead lakhs of people refusing to chant ‘Bharat Mata ki Jai‘” if he was not “bound by law”. Ramdev’s yogic powers probably do not extend to being a human guillotine for lakhs.

What he said was most like just a manner of speaking, an outburst of deeply felt patriotism rather than, as the law puts it, “an intentional insult with intent to provoke the breach of peace”. But what it points to is something becoming far more commonplace in India these days – the violence of words.

Perhaps social media has inured us to this. We are not that shocked anymore that those who take a different viewpoint than ours should be threatened with dismemberment and rape. An MP from the ruling party has no qualms about “joking” or perhaps just “half-joking” about tying a writer to an Army jeep as a human shield in Kashmir.

Now at the Hindu Rashtra conclave in Goa, Sadhvi Saraswati, named after the Goddess of education and learning, has said that those who support consumption of beef should be publicly executed. Those who are secular must be “attacked first” because pehle Hindu ko Hindu banana hai (first we need to make those who are Hindu into real Hindus). Muslims and Christians need to do gharwapsi. And if a little thing like the Constitution gets in the way, that’s not an issue. The Hindu Janajagriti Samiti thinks the constitution that matters is the “one that was written by Ram and Krishna.”

It would be easy to say that these firebrand Sadhvis are best ignored and not given media oxygen to propagate their vitriol. They are the fringe and it is media attention that makes them mainstream. But the violence of words left unchallenged can quickly go beyond words. We have seen it over and over again.

But the violence of words left unchallenged can quickly go beyond words. We have seen it over and over again.

Sadhvi Saraswati might only be “saying” that those who support consumption of beef should be publicly executed. But we live in a country where gangs of so-called gau rakhshaks roam the highways looking to lynch those who they suspect of trafficking in cows. In a time of Alwar and Dadri, a Sadhvi Saraswati is not just hot air. She is tapping into something far more deadly, deliberately stoking a fire.

Likewise a Baba Ramdev is not just being melodramatic in the name of patriotism. His statement basically shows a contempt for the law that gets in the way of his brand of take-no-prisoners patriotism. When the law is regarded as a hindrance that holds a true deshbhakt back, something that ties his hands, is it any surprise that those JNU students accused of raising secessionist slogans were beaten on the premises of a courthouse itself?

When the law is regarded as a hindrance that holds a true deshbhakt back, something that ties his hands, is it any surprise that those JNU students accused of raising secessionist slogans were beaten on the premises of a courthouse itself?

In a culture where we threaten violence at the drop of a hat or a dissenting point of view, why is it a surprise when actions follow words and spill over into real violence? Thus it’s hardly surprising that when the national anthem plays in a movie theatre, as is mandatory now, we are not content with just standing for it. The true patriot is one who goes and thrashes anyone not standing in the darkened theatre. In this theatre of violence our performance of patriotism is not complete until everyone is marching in lockstep to our beat.

Or chanting Jai Shree Ram. A video has surfaced that shows two men thrashing an apparently mentally-challenged woman in Rajasthan and commanding her to say “Jai Shree Ram” and “Jai Hanuman” as she screams and cries for help. Two men have been arrested and it’s too early to say what the real motivations were for the attack. A police officer says the woman was suspected of entering their fields with “ill intention”. The video suggests that the men who beat her also said “Bol Allah”.

Whether it is Allah or Ram we have fallen a long way from Raghupati Raghava Raja Ram, Ishwar Allah Tero Naam.

But it’s worth noting, whatever the real motivations, the attack comes under the cover of Jai Shree Ram where Lord Ram, the man who went into battle to rescue Sita from Ravana, is now being invoked to beat a woman. Whether it is Allah or Ram we have fallen a long way from Raghupati Raghava Raja Ram, Ishwar Allah Tero Naam.

We can dismiss all this as the work of fringe elements. But the fringe is creeping into mainstream because it operates with relative impunity. And perhaps the mainstream is not unhappy to let it do so because it sees these acts as consolidating the base rather than splintering it. The politics of the “other” is a toxic force but a powerful one and the Baba Ramdevs and Sadhvi Saraswatis are together creating bright and bold lines that define the “other”. Political parties can reap the benefit of that polarization.

It’s a strategy that’s worked well even in the United States. The violence of Trump’s rhetoric in his rallies, his exhortations to his followers to beat up the “other” and his half-joking promise to pay their legal bills evoked gasps of horror in the mainstream media. But it worked as Hilary Clinton discovered to her chagrin.
The most comprehensive data survey to be released about the 2016 election by the Voter Study Group has shown that while job worries, economic populism were all factors, they were no more driving forces in this election than they had been in previous one.

The real impetus in the last election was not anxiety about the economy but anxiety about Mexicans, Muslims and blacks, basically a fear of the other. It was an anxiety exacerbated by the election of Barack Obama about America being stolen from “real Americans”.

And if you need help in figuring who is real or who is not look no further than UP chief minister Yogi Adityanath. He has just helped spell out who is the “other”.

In India, our mainstream politicians are far more careful about what they say than the loose-lipped Trump. But here too we are seeing a growing narrative of who is a real Indian and who is not and of taking back the country in the name of the real Indian as was made clear from this chilling Firstpost video of Bajrang Dal training camps arming schoolchildren in the name of protecting Hindu culture from the “other”.

And if you need help in figuring who is real or who is not look no further than UP chief minister Yogi Adityanath. He has just helped spell out who is the “other”. He told a public meeting that it was good foreign dignitaries are gifted a copy of the Gita and the Ramayan when they come to India these days. In old days, foreign VIPs were “gifted replicas of the Taj Mahal and other minarets which did not reflect Indian culture.”