Why farmers in this Kerala village pray for peace with Pakistan

Having seen fluctuations in the export of betel leaf to Pakistan over the years, Malappuram betel farmers in northern Kerala remain hopeful of overcoming the present impasse and resuming a profitable trade 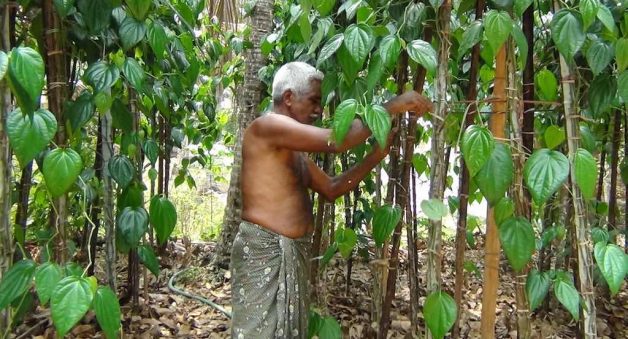 Betel leaf farmer Krishnan of Tirur continues to cultivate it in spite of falling exports. (Photo by K. Rajendran)

With temperatures soaring, farmers in India pray for summer showers. However, in Tirur administrative block of Malappuram district in northern Kerala, around 12,000 farmers are also praying, not for rain but for peaceful relations between India and Pakistan.

Even as Pakistan troops shelled mortars across the Line of Control in the first week of April, 70-year-old Krishnan T. of Ozhur Village prayed for peace and for the firing to cease. “Only if peace prevails we can feed our families by selling the betel leaves we grow,” Krishnan, one of the oldest betel leaf farmers, told VillageSquare.in.

Export of betel leaves from Tirur to Pakistan is the reason for betel farmers’ desire for peaceful relationship between the two neighbors. Tirur is about 3,000 km away from India’s border with Pakistan. However, livelihoods of hundreds of farmers who have been dependent solely on betel farming depend on Pakistan’s political barometer.

For farmers in Ozhur, Thanallur, Chembra, Mori and Payyapuram villages in Tirur taluk, the betel leaf variety, popularly known as Tirur Lanka paan, meant prosperity. But circumstances have changed and what the farmers saw as their pride before 2016 see it as a burden now.

Before independence, at least one container was set apart for the betel leaf cargo in the goods trains that stopped at Tirur railway station. It reached markets in Karachi and Lahore through connecting trains at Chennai, Delhi and Lahore. 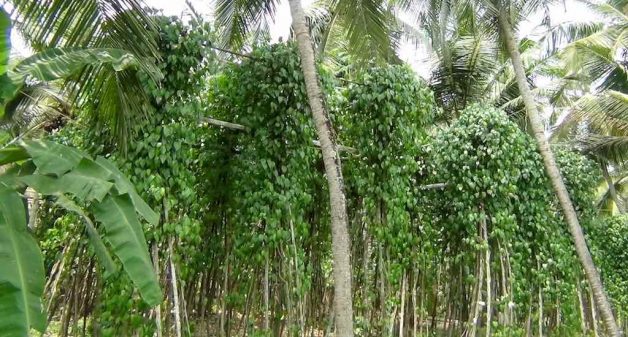 A farm in Ozhur village with vines of Tirur Lanka paan. (Photo by K. Rajendran)

Krishnan recalled direct flight between the countries for cargo service too. “In those days, Rs 70 for a bundle of 100 betel leaves was a huge amount,” he said.

Anecdotes about Lanka paan abound in Tirur. One is about Indian soldiers making significant advances in the 1965 war, after throwing packs of Tirur Lanka paan for the Pakistan troops. The bolder one is of Muhammad Ali Jinnah wanting to annex Tirur instead of Bangladesh, to ensure a steady supply of Lanka paan. While the Muslims of Tirur decided to stay with India, Nehru assured Jinnah of uninterrupted supply of Tirur’s betel leaves!

“They may be myths, but it connected people over religion and language,” 70-year-old Muthu Koya told VillageSquare.in.

“Even during the wars in 1965, 1971 and 1999, paan trade was not affected,” Mohammed P., a betel leaf farmer at Puthanathanni, told VillageSquare.in. Though farmers were apprehensive during regime changes and tensions in bilateral relations, they were able to sail through the ups and downs.

In 2016, when Prime Minister Narendra Modi met his Pakistani counterpart on his birthday to greet him, the farmers believed that their produce would fetch record prices. But with many irritants cropping up and the standoff between the countries deepening, cross-border trade suffered.

Tirur’s paan was the biggest sufferer, when on 21June, 2016, Pakistan government imposed a 140% import tax for betel leaf. Affected Pakistani importers found a solution by importing betel leaf from Sri Lanka, the flavor of the paan being similar to that of the Tirur paan.

The price of Tirur Lanka paan plummeted from Rs 70 per bundle to Rs 29 a bundle. “With this amount, we can’t meet our farming expenses,” said Mohammed.

The historic paan bazaar in Tirur stands totally changed. A thriving business hub of betel leaf trade just two year ago, when hundreds of farmers and traders gathered, the market hardly shows signs of any activity.

Other commercial establishments have replaced the paan trade centers in Tirur. “From 80, the number of betel leaf traders has come down to 20 in a short span,” Eani Haji, president of Betel Merchant Association, told VillageSquare.in. 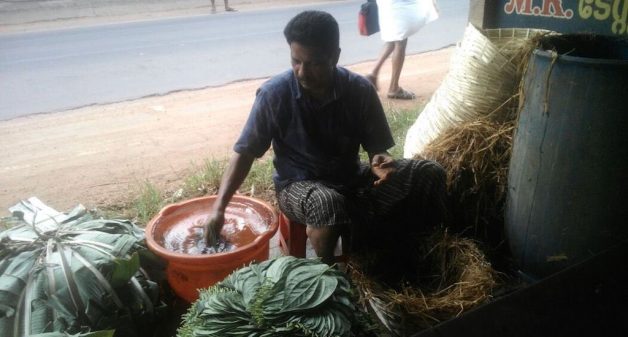 Aghilesh is one among the remaining traders. His motto is to carry on the tradition. According to him, now one cannot depend solely on betel leaf trade for livelihood. He has other businesses as well. “I couldn’t abandon the betel leaf trade that my father had proudly operated for many decades,” he told VillageSquare.in.

In May 2016, a month before Pakistan introduced the new tax, Tirur traded 6 tons of paan every weekday. “Trade and the price have declined by half,’ said Aghilesh.

Betel leaf farmers and traders of Tirur are exploring alternate markets. For Tirur Lanka paan, Utter Pradesh is the only alternative market. But they face stiff competition from Ranivellore betel leaf from Tamil Nadu and Deshi betel leaf from West Bengal.

Officials in the Ministry of Commerce were reluctant to talk about the issue. Though Pakistan’s trade policy has affected 12,000 betel leaf farmers and traders, it has not affected large-scale traders of other commodities such as cement.

Krishnan’s son Dineshan, has turned to plucking coconuts for a living. “Though it’s a tedious job, I can earn more money than from betel leaf farming,” he told VillageSquare.in.

Having overcome three wars and many impasses, Krishnan and other farmers remain hopeful that their prayers for peaceful relations with Pakistan would be answered and Tirur’s betel leaf will regain its position across the border.

K. Rajendran is a journalist based in Kerala.

Why farmers in this Kerala village pray for peace with Pakistan