Why I support Aamir Khan and Kiran Rao

Can you even imagine the fear that must have passed through Kiran Rao‘s mind, asks Syed Firdaus Ashraf. 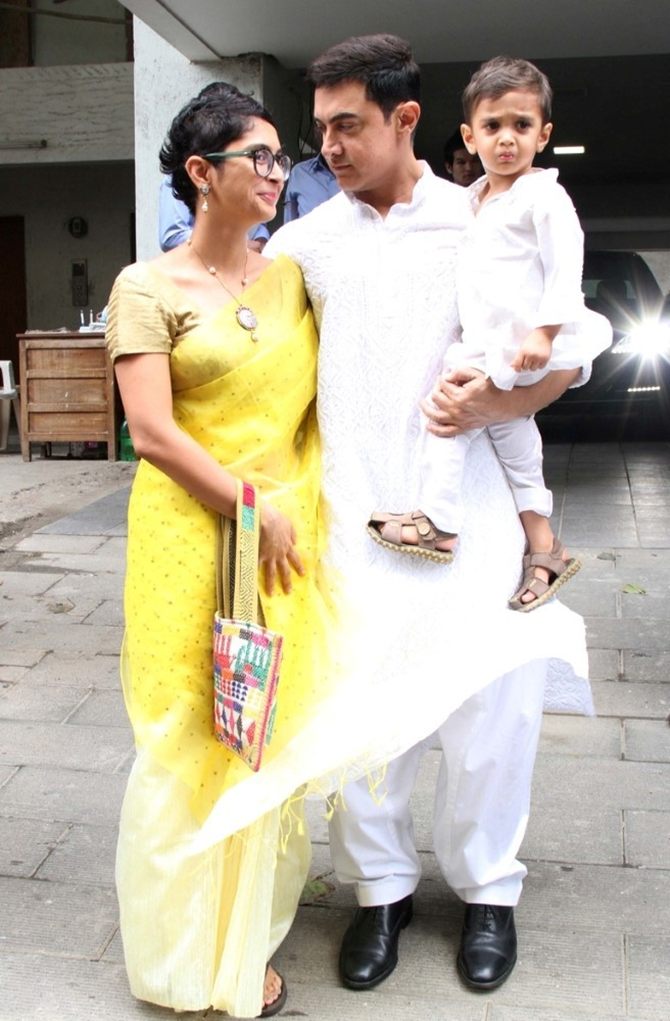 A few years ago I met a Pakistani journalist at a promotional event for a Shahid Kapoor film in Mumbai.

She was starry-eyed and wanted to interview the actor for her newspaper. She was introduced to all journalists assembled at the event by the actor’s publicist.

The Pakistani journalist asked all of us Indian journalists about Shahid Kapoor’s name.

It puzzled her because Shahid was a Muslim name while Kapoor was a Hindu name.

We had a good laugh over it and told her, “Welcome to Bollywood.”

We then explained to her that Shahid’s mother was a Muslim, dancer Neelima Azim, and his father was a Hindu, actor Pankaj Kapur.

We further told her that in Bollywood there was nothing called Hindu and Muslim. This was the most secular industry in India, a place where nobody thought of religion.

We went on to tell her about Shah Rukh Khan being married to Gauri and how nobody was bothered that Gauri was a Hindu and Shah Rukh a Muslim.

It must have been difficult for the Pakistani journalist to digest all this, so she asked us, “What religion do they follow then?” “Both Hinduism and Islam,” we said. “This is Bollywood and this is India.”

She was taken aback at our reply. She could not believe Hindus and Muslims could intermarry so easily and that there was no problem in society over such marriages.

Come May 2014 and everything that we knew about Bollywood, and India, was to change.

Narendra Modi was elected prime minister after which everyone who believed in this idea of India came under attack, as did Bollywood.

The Khans, who were the showpieces of Hindu-Muslim unity, suddenly became ‘jihadis. Sorry, ‘love jihadis’ under the new dispensation.

Check this out: Shah Rukh Khan married Gauri Chibber, Aamir Khan married Kiran Rao (and Reena Dutta before that) and Saif Ali Khan married Kareena Kapoor. All these actors, it was suggested by the Not Fringe Brigade, had committed love jihad by marrying Hindu women.

No one would have given a damn about all this loose talk, but for the silence of the Modi government over right-wing monsters running amok about the Khans and anyone who has had an inter-religious marriage.

Never in the history of Independent India has a sitting member of Parliament declared that there was a conspiracy by Muslims to convert Hindu women under the guise of love jihad. What was Prime Minister Modi’s response, you ask. Silence, of course.

First came this vicious campaign that Muslim men were here to marry Hindu women and convert them to Islam. Then, the speculation that in 50 years’ time, the Hindu population would dwindle and Islam would become the major religion of India.

In Meerut, when a Hindu girl fell in love with a Muslim boy and eloped to marry him, she was forced to file a rape case against the boy and his family. By who else, do you think? The Not Fringe Brigade.

A year later, the same girl married the Muslim boy of her own choice and no arrests were made. Nor was the Not Fringe Brigade called to account for the way they hounded the boy and his family.

When all this communal venom was being sprayed across the country, Prime Minister Modi and his ministers emulated the three monkeys made famous by the Mahatma — See Nothing! Hear Nothing! And, of course, Say Nothing!

In the name of culture, food habits were forced down the throats of the Indian people with the threat: ‘If you want to live in India, give up beef.’

As does Haryana Chief Minister Manohar Lal Khattar who told the Indian Express that Muslims could live in India, but only if they gave up beef.

In Dadri, a Muslim man was lynched over rumours that he had stored beef in his fridge. Modi — who tweets on everything under the sun — did not express a word of remorse over this horrific incident till reports in the international media forced him to offer a tame, belated, response.

But what do you expect when the prime minister himself targets Muslims — not once, but twice — during the Bihar election campaign? Openly stating at a public meeting that Lalu Yadav and Nitish Kumar wanted to snatch reservations from the Dalits to give it to a ‘particular community.’ No prizes for guessing which community.

It made me wonder if Narendra Modi — who swears that the Constitution of India is his holy book and will make a rare speech in Parliament on Constitution Day — is the prime minister only of one community.

By no means is this a complete list of what one commentator calls ‘coercive majoritarianism’, since the Modi government came to power 18 months ago. But it will give you an idea of what may have gone through director Kiran Rao’s mind after reading about all this in the newspapers, and seeing it nightly on news television debates.

Imagine her fears: Would her son Azad Khan be safe when he grew up? Was it safe for him to live in an India where the prime minister has done nothing to quell the fears of communal hatred?

Would Azad Khan, when he grew up, be able to date a Hindu woman and roam freely on the streets of, say, a city like Mangalore where recently it was reported a young Muslim man was beaten up, stripped naked and tied to a pole for being seen in the company of a Hindu women

IMAGE: Director Kiran Rao who asked her husband Aamir Khan if it was safe to live in the country. When the Bollywood superstar mentioned this question at an event hosted by the Indian Express on Monday, November 23, it provoked an angry, unwarranted, campaign against the actor, seen here with Rao and son Azad Khan. Photograph: Pradeep Bandekar.

We must invest in economies of poor, build capacities so they can withstand & overcome calamity
#India - Why capital punishment must go #deathpenalty
Dalit Student Lynched because of affair with Maratha Girl #WTFnews
Demolitions and the English press