Why is Modi telling us to remember something we haven’t been allowed to forget? 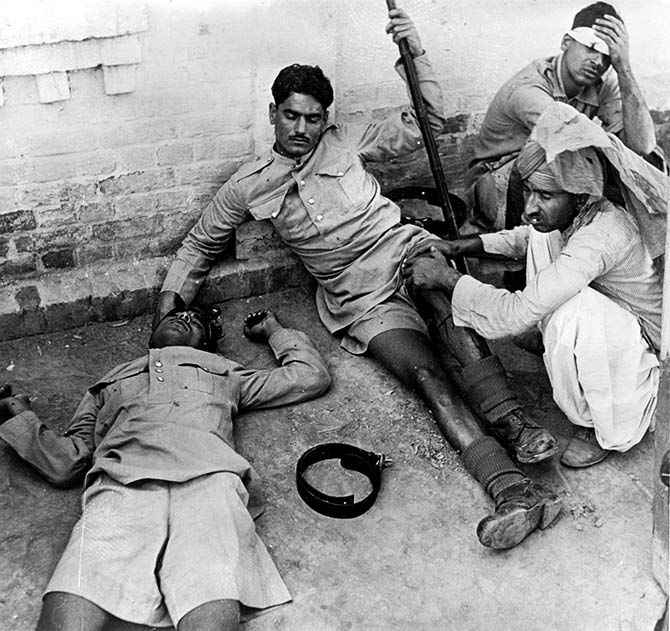 Have we been allowed to forget Partition?
Isn’t Partition the reason many Hindus cannot bring themselves to trust Muslims?
So many Muslims born after 1947 have told me with anguish: “How long will we be blamed for Partition?” notes Jyoti Punwani.

‘Partition’s pains can never be forgotten… May the Partition Horrors Remembrance Day keep reminding us of the need to remove the poison of social divisions, disharmony and further strengthen the spirit of oneness, social harmony and human empowerment. — Narendra Damodardas Modi, August 14, 2021

Was this the articulation of the inner-most feelings of former RSS pracharak Narendra Modi? Or was the Indian prime minister using Pakistan’s Independence Day as yet another occasion to invoke hatred towards our neighbour? Or was it both?

Where was the need for this exhortation? Have we been allowed to forget Partition?

Isn’t Partition the reason many Hindus, even those affected by it only indirectly, cannot bring themselves to trust Muslims, whom they blame for having voted en masse for Pakistan, even though only one-fifth of the population comprising mostly wealthy Indians, were allowed to vote in the 1946 elections​?

In every communal riot, aren’t Muslims taunted with their alleged loyalty for Pakistan, not just by the fanatical mobs attacking them, but also by the police of our ‘secular’ State?

So many Muslims born after 1947 have told me with anguish: “How long will we be blamed for Partition?”

So why was Narendra Modi telling us to remember something we haven’t been allowed to forget?

Modi spoke of the ‘pain and horrors of Partition, the poison of social divisions and disharmony. ‘He should know. His own parent organisation was at the forefront of inflicting those pains and horrors.

My family migrated from Karachi. Nandita Bhavnani’s 2014 book: The Making of Exile, Sindhi Hindus and the Partition of India (Tranquebar Press) describes how two RSS members were killed while making a bomb in Karachi just after Independence, on September 10, 1947. Just a day earlier, a bomb blast had injured five Muslims in the same city.Sponsored

30 RSS members were arrested for these incidents; among those named as ‘absconding’ was L K Advani, the then secretary of the RSS in Karachi.

Here’s one former RSS supporter’s candid confession of the pain and horror he inflicted personally on Muslims.

Dr K G Rastogi writes in his autobiography Aap Beeti, as reported in The Asian Age of October 25, 1999: ‘A strange incident happened in the locality as the attackers (read Hindus) started fighting with each other over a beautiful woman found in one house where the killing was going on.’

‘The attackers forgot their mission and started claiming the woman. I threatened them, and then a solution came to my mind. I shot her dead.’

Aap Beeti, reported The Asian Age, was dedicated to the RSS, with a foreword by then RSS joint secretary K S Sudarshan.

Under the first NDA government, HRD minister Murli Manohar Joshi got Rastogi appointed as the President’s nominee on the committee choosing professors for the NCERT, the country’s leading school education body.

What of those who actually suffered the ‘pain and horrors of Partition’? How do they recall them?

The late Kamla Hiranand was well-known among Sindhis as a Gandhian, freedom fighter and writer.

In an essay called ‘The Situation in Sindh during Partition’, an excerpt of which appears in translation in Nandita Bhavnani’s book, Hiranand describes her angry reaction at finding the compound of a Hindu home in Karachi occupied by Muslim refugees from India in December 1947.

“Is this an act of decency, the way you have come and sat down in another’s home?” I had barely said this when one of them immediately shouted, “Who are you to teach us decency?… See the decency of your Delhi-wallas, who have taken away the clothes from our newborn’s body in the biting cold of Delhi. Go and teach them decency. Now, this is our country, we will stay here.” (From chapter ‘Alienated at Home’, Page 43, The Making Of Exile)

Hiranand was writing this when Muslims from India were pouring into Pakistan, bringing with them accounts of violent journeys, and the atmosphere in Pakistan was heavy with calls for retaliation against Hindus. Yet, she gives an honest account of the compulsions that made Muslim refugees squat in Hindu houses.

Kamla Hiranand also had to migrate. She ought to have been a prime candidate for the politics of ‘never forget, never forgive’.

Yet, when I interviewed her before the 2009 elections when L K Advani was running for prime ministership, she shook her head. “Vote for Advani? Never. I cannot accept his ideology.”

Her reply reminded me of Ahmedabad’s Dr Girishchandra Rawal. His 62-year-old wife had been burnt to death when Coach S6 of the Sabarmati Express was set on fire at Godhra on February 27, 2002.

Yet, despite urging by VHP members, he refused to support the violent retaliation for this act that was meted out on Gujarat’s Muslims. “There are no words to describe the blow I have suffered,” he said. “But there’s no talk about revenge in Hindu religion.”

But not everyone can be like that. Many Sindhis who migrated were staunch RSS supporters.

Ironically, the grandchildren of some of these Sindhis have ended up marrying Muslims, not just Indian, but even Pakistani Muslims.

L K Advani’s niece married a Muslim; the BJP leader came down to Mumbai to bless the couple.

IMAGE: In this photograph taken on September 27, 1947, at the Kingsway refugee camp in Delhi, children help themselves to the rice provided for their meal. Photograph: photodivision.gov.in

It is not as if those affected by Partition want to forget their past.

Despite the ‘pain and horrors’ that made them flee their homes, refugees from Pakistan have named their shops after the Pakistani cities they carry within them.

Even L K Advani couldn’t stop himself from visiting the streets where he grew up when he visited Pakistan in 2005.

Yet, when petty-minded politicians in Mumbai forced these victims of Partition to give up the public manifestation of the memories they cherish, to remove these names from their shops in 2009 and again last year, no one from the BJP came forward to help.

Naturally, this is not the kind of Partition memory that the BJP wants Hindus to carry.

Those who have chosen to retain the names of cities they were forced to flee; those from Partition-affected communities who choose to marry ‘the other’, have actually exemplified and ‘strengthened the spirit of oneness, social harmony and human empowerment’ the PM referred to. But they have done this not by remembering the ‘pain and horror, the poison of social divisions and disharmony’, as he desired, but by rising above these.

Their acts were possible because Gandhi, Nehru, Azad and Ambedkar, among others, rejected the two-nation theory which led to Partition, which stipulates that Hindus and Muslims cannot co-exist.

These leaders’ adoption of a secular framework allowed our heritage of diversity to flourish, despite the frequent communal riots.

But since the BJP came to power in 2014, the two-nation theory has been making a comeback.

Partition was the reason Home Minister Amit Anilchandra Shah gave for the CAA which excludes Muslim refugees from Indian citizenship; Assam Chief Minister Himanta Biswa Sarma was more explicit: ‘CAA is just an agenda you need to finish, which remained half-done during Partition,’ he said.

It’s not just those in power. Followers of the PM are the ones acting on the two-nation theory on the ground.

When a Muslim is forced to recite the war-cry of the dominant Hindu religion; when a Muslim professor is made to give up his job of teaching Sanskrit religious texts to Hindu students; when Muslims are forbidden from participating in Navratri and Teej, the two-nation theory gets a fillip.

These are the occasions when ‘the poison of social divisions, disharmony’ is spread. Has the PM — or anyone in his party — ever acted against his followers?

Interestingly, August 14 is the day the RSS observes as Akhand Bharat Sankalp Divas.

Its chief Mohan Bhagwat explained his vision of Akhand Bharat in February this year: A country which would include not just India, Pakistan and Bangladesh, but also Afghanistan, all ‘unite(d) through Sanatan dharma, which is humanity’s dharma and of the entire world and today it is called Hindu dharma.’

Basically, this is a vision that wipes out Islam from the sub-continent, a laughable fantasy.

But in the one country where Bhagwat’s organisation has influence, this vision of an Islam-mukt Bharat, the unfinished agenda of Partition, is being unfolded every day.

A coincidence then that the PM named the day on which his parent organisation dreams of a Hindu Rashtra as ‘Partition Horrors Remembrance Day’?