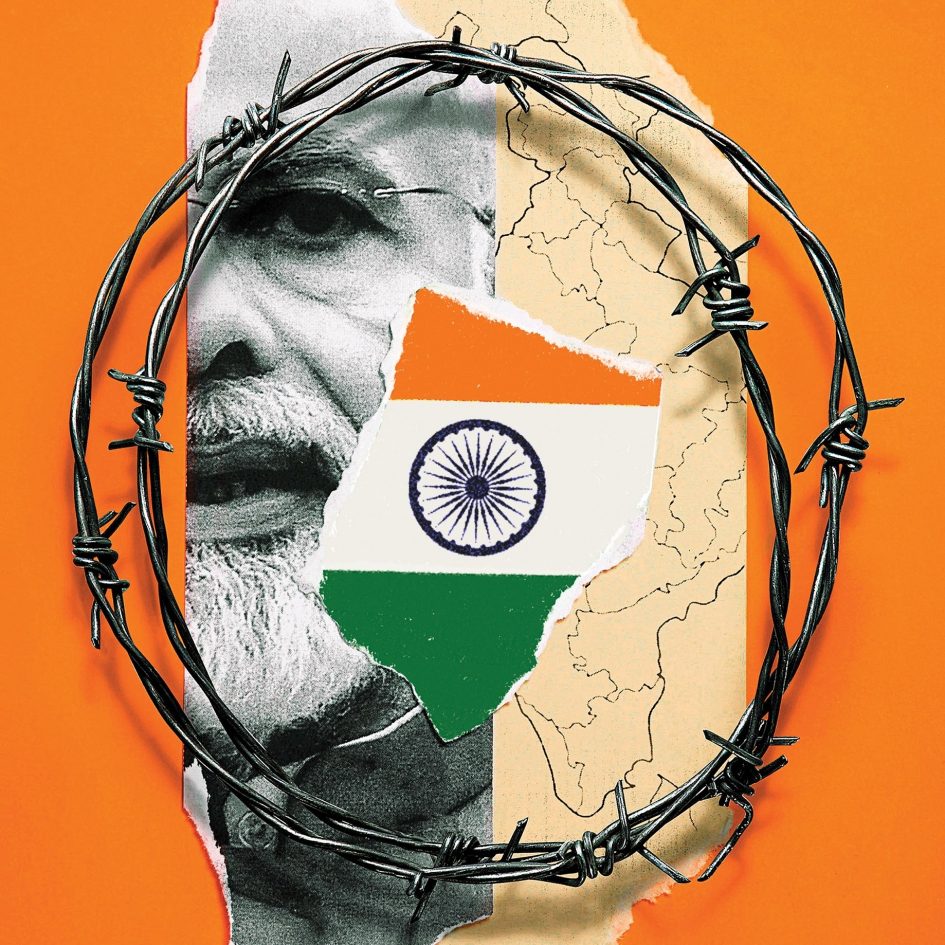 By Shamsul Islam*
PM Modi conveys to the nation Mann ki Baat (words from the heart) only on Sundays. One assumes that the words coming from our PM’s heart would be pristine, innocent and without any malice. Unfortunately, his Mann ki Baat is not from heart but words spoken hail from brain which is generally believed to induce subjective, often untruthful, sectarian thoughts.
The latest proof of this character could be found in the latest Mann ki Baat when PM told that the nation was “saddened by insult to the Tricolour” at Red Fort on the last January 26. The Telegraph Kolkata was on the dot when it wrote in an editorial “It is more than a little funny that the PM, who reportedly autographed a national flag for Obama, and used another as a wipe-cloth [during a yoga session], should be so pained by a non-existent insult”.

Modi did not tell who “insulted” the National Flag and how. The whole world knows that a person who apparently is a supporter of BJP-RSS, and has photographed with both the Prime Minister and his right-hand man, Amit Shah, home minister, unfurled the flag in question.

Be that as it may, Modi’s love for the Tricolour needs to be compared with his world-view as a member of the RSS and his confession of being a Hindu nationalist (Modi’s interview to Reuters as CM of Gujarat, July 12, 2013).

The RSS and other Hindu nationalist organizations like VD Savarkar-led Hindu Mahasabha hated every symbol which represented united freedom struggle of the people of India against the British rule. The case of the Tricolour is the most pertinent one.
The Congress, at its Lahore session in December 1929, adopted Purna Swaraj (Complete Independence) as the national goal and called upon the people to observe January 26, 1930, as Independence Day by displaying and honouring the Tricolour which was by consensus considered the flag of the national movement by this time.

In response to this, a biography of Hedgewar published by the RSS informs us that Hedgewar as Sarsanghchalak issued a circular to all the RSS shakhas to worship the Bhagwa Jhanda (saffron flag) instead of the Tricolour. [N. H. Palkar (ed.), “Dr. Hedgewar Patr-RoopVayakti Darshan” selection of Hedgewar’s letters, Hindi edition, RSS publication, Indore, 1989, p. 18.]
MS Golwalkar, the most prominent ideologue of the RSS and second Supremo of the organization whom Prime Minister Narendra Modi credits for grooming him into a Hindu nationalist leader while addressing a Gurupurnima gathering in Nagpur on July 1 4, 1946, stated that it was the saffron flag which in totality represented their great culture. It was the embodiment of God: “We firmly believe that in the end the whole nation will bow before this saffron flag”. [“Shri Guruji Samagra Darshan”, a collection of writings/speeches of Golwalkar in Hindi, a RSS publication, vol. I, Nagpur, n.d., p. 98.]

The English organ of the RSS, “Organiser”, in its editorial (‘The Nation’s Flag’), dated July 17, 1947, while strongly reacting to the news that the Constituent Assembly of India committee on the National Flag had decided in favour of the Tricolour as the National Flag since it was acceptable to all parties and communities, wrote:
“We do not at all agree that the Flag ‘should be acceptable to all parties and communities in India’. This is sheer nonsense. The Flag represents the nation and there is only one nation in Hindusthan, the Hindu Nation, with an unbroken history extending over 5,000 years. That is the nation and the flag must symbolize that nation and that nation alone. We cannot possibly choose a flag with a view to satisfy the desires and wishes of all the communities…We cannot order the choice of a flag as we order a tailor to make a shirt or coat for us…”

Demanding the immediate rejection of the Tricolour as the National Flag and adoption of saffron flag in its place, the editorial continued:
“There is something immensely endearing to the nation’s heart and soul in this unique colour of the Flag which is the colour peculiar to the morn [morning] when life-giving Sun makes his slow but majestic appearance in the east. In the same way, our forefathers have handed down this glorious flag of ours as the life-giving force to the world…This Flag and this alone can be the true national Flag of Hindusthan. That and that alone will be the only one acceptable to the nation. There is growing evidence of this insistent demand on the part of the public and the Constituent Assembly would be well advised to carry out their wishes.”

Demanding the immediate rejection of the Tricolour as the National Flag and adoption of saffron flag in its place, the editorial continued:
“There is something immensely endearing to the nation’s heart and soul in this unique colour of the Flag which is the colour peculiar to the morn [morning] when life-giving Sun makes his slow but majestic appearance in the east. In the same way, our forefathers have handed down this glorious flag of ours as the life-giving force to the world…This Flag and this alone can be the true national Flag of Hindusthan. That and that alone will be the only one acceptable to the nation. There is growing evidence of this insistent demand on the part of the public and the Constituent Assembly would be well advised to carry out their wishes.”

The most shocking denigration of the National Flag appeared in the same RSS organ just a day before the independence of India (August 14, 1947). While demeaning the choice of the National Flag it wrote:
“The people who have come to power by the kick of fate may give in our hands the Tricolour but it never be respected and owned by Hindus. The word three is in itself an evil, and a flag having three colours will certainly produce a very bad psychological effect and is injurious to a country.”
Even after independence, when the Tricolour became the National Flag, it was the RSS which refused to accept it as the national flag. Golwalkar, while discussing the issue of the national flag in an essay entitled ‘Drifting and Drifting’ denigrated the National Flag in the following words:
“Our leaders have set up a new flag for our country. Why did they do so? It just is a case of drifting and imitating. Ours is an ancient and great nation with a glorious past. Then, had we no flag of our own? Had we no national emblem at all these thousands of years? Undoubtedly, we had. Then, why this void, this utter vacuum in our minds?” [Golwalkar, MS., “Bunch of Thoughts”, collection of writings of Golwalkar, RSS publication, 1996, pp. 237-238.]
Savarkar, like the RSS, abhorred every symbol of the Indian people’s united struggle against the British rule. He refused to accept the Tricolour (at that time there used to be a charkha or spinning wheel in the middle of it) as national flag or flag of the freedom struggle. In a statement issued on September 22, 1941 for the benefit of Hindu Mahasabha cadres, he declared:
“So far as the flag question is concerned, the Hindus know no flag representing Hindudom as a whole than the ‘Kundalini Kripanankit’ Mahasabha flag with the ‘Om and the Swastik’ the most ancient symbols of the Hindu race and policy coming down from age to age and honoured throughout Hindusthan. It is actually sanctioned and owned by millions on millions of Hindus today from Hardwar to Rameshwaram and flies aloft on every Hindusabha branch office at thousands of centres. Therefore, any place or function where this Pan-Hindu flag is not honoured should be boycotted by the Hindu sanghatanists at any rate…” [SA., Bhide (ed.), Vinayak Damodar Savarkar’s Whirlwind Propaganda: Extracts from the President’s Diary of his Propagandist Tours Interviews from December 1937 to October 1941, Hindu Mahasabha publication, p. 469.]

How the Congress and Socialist cadres carrying the National Flag suffered at the hands of RSS and Hindu Mahasabha zealots was narrated by the well-known socialist leader NG Goray. He witnessed an incident in 1938 when the Hindutva cadres tore up the Tricolour and attacked the leaders who were carrying it. Holding Savarkar and Hedgewar squarely responsible for it Goray said:
“Who attacked the May Day procession? Who assaulted men like Senapati Bapat and Gajanan Kanitkar? Who tore up the national flag? The Hindu Mahasabhaites and the Hedgewar boys did it all…They have been taught to hate the Muslims in general as Public Enemy Number 1, to hate the Congress and its flag…They have their own flag, ‘the Bhagwa’, the symbol of Maratha Supremacy.” [Anil Nauriya, ‘The Savarkarist syntax’, “The Hindu”, September 18, 2004, Delhi.]

The denigration of the Tricolour by the RSS cadres has reached to more nefarious levels. It is being used as a repressive tool against students, working class, minorities, intellectuals, journalists and in the latest instance, the historic farmers’ movement. It is sad times for democratic Indian polity that Modi is patronizing this Hindutva charge against the ideals of the Tricolour.
—
Formerly with the Delhi University, click here for Prof Islam’s writings and video interviews/debates. Facebook: https://facebook.com/shamsul.islam.332. Twitter: @shamsforjustice, Blog: http://shamsforpeace.blogspot.com/