Why most women would never marry Narendra Modi #Sundayreading 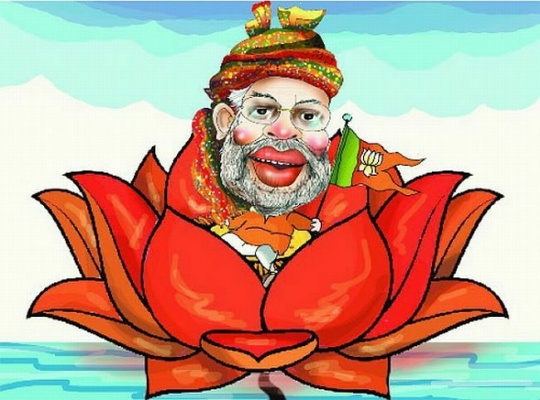 By Shobhaa De, Mumbai Mirror | Apr 12, 2014, 02.28 AM IST
Important disclosure: I have asked approximately a hundred women this idiotic question: “Would you marry Narendra Modi?” I have even asked myself the same one (errr… maybe he goes for older women?). Why? Because when a woman looks at a man with any level of interest, she generally asks herself a set of absurd questions, starting with: Is he ‘husband material’? Would I like to make babies with him? Is he a keeper?This has nothing to do with age. Since I am writing about NAMO’s attractiveness / sex appeal vis-a-vis the women of India (key voters!), how could I resist or hold back? So here’s the first cut on this sizzling topic: Narendra Modi – Stud or Dud? Namo is definitely not the sort of guy you want to take home to mother. He’d probably scare the hell out of her. You wouldn’t want to introduce him to friends either (this is key… girls- friends must approve of boyfriends/husbands). As for getting Dad to hang with this guy – oooops! No chance. After all, Dad is the real ‘chowkidar’ in a daughter’s life. Why hire another? Next criterion: Would Namo make a compatible travel companion? Doubtful. He’d probably make a speech wherever he finds five people. And the only sight seeing he’d be interested in would be restricted to helicopter surveys of expressways. Could Namo be a good listener (this is perhaps the single most important quality women look for in men)? The answer is an emphatic ‘no’. Modi loves the sound of his own voice. And he doesn’t listen to anyone – man or woman.

Besides, he doesn’t speak – he thunders. He talks at people, not to them. A woman likes to be spoken to. He gives the impression he’d have neither the patience nor the interest in listening to her and may consider such interactions a complete waste of his precious time – unless of course, the woman was gush-gush-gushing and drooling all over him. Modi appears arrogant and dismissive, self-absorbed and conceited. Chicks like appreciation… compliments .So do men! Modi always appears in self-congratulatory mode, rarely bothering to make eye contact even with someone sitting two feet away from him. Basically, Modi gives the impression of being madly in love – with himself.

Just to balance it out a little, let me say it’s not entirely downhill for Namo, either. There are women who admire cave men. There are women who do consider Namo ‘manly’ in the old fashioned sense -remember, he has that impressive 56-inch (now downsized to 44-inch) chest. While it may not translate into a ‘Me Tarzan, You Jane’ script, some women do believe Namo represents the strongsilent prototype – a guy who focuses unambiguously on masculine concerns and cares a damn about metrosexuality. My worry is that he looks as if he doesn’t care a damn about any kind of sexuality – metro, new age, whatever. Power is sex for Modi. Where is the space for a woman in this equation? Some ladies insist it’s a relief to come across a man who doesn’t give off a lecherous vibe. That’s fine. But zero vibe is also not nice, na? Then again, he himself says marriage is not for him. Never mind what Jashodaben, the wife he abandoned when she was just seventeen years old, feels about that. His ‘bachelorhood-equals -sainthood- equals honesty’ theory is equally bizarre. He recently said no wife, no parivaar means no temptation to accumulate wealth, which in turn leads to a drastic reduction of corruption. This is another crazy pronouncement of his, and it makes him sound like some sort of a weirdo not in sync with the times we live in.

Sorry, but Namo doesn’t quite cut it in the ‘Main Tera Hero’ sense. I mean – really! It is not about his portly physique. It is not about his strange kurta which stretches across his generous midriff. It is not about any of this. Fifteen years ago, nobody outside of political circles had heard of Narendra Modi. When he did shoot into prominence, it was for all the wrong reasons (Godhra). It is only in the past two years that Modi has registered strongly and become a household name. But here’s the catch: he is more feared than loved. More admired than respected. Women loathe bullies/ tyrants/ autocrats/ egoists. Unfortunately, Modi falls into this reviled category. So… let’s be upfront about this – we are emotional people. We like mushy, happy endings, particularly to love stories. If Narendra Modi were to be cast in an iconic Bollywood film – which role would he play best? Go on… ask yourself. Gabbar Singh or Veeru from ‘Sholay’? The answer’s pretty obvious. And no woman in her right mind would want to be Mrs. Gabbar Singh.