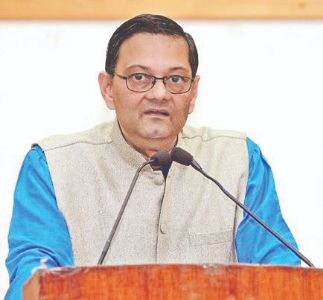 Chandra Kumar Bose’s dissent comes at a time when the BJP is going all out in support of the newly-enacted law and took out a support march in West Bengal on Monday.

Bose, who has been articulating his dissenting views for quite some time, also disapproved of the abusive language being used by the BJP leaders like its state unit president Dilip Ghosh.

“The movement which is going on across India can be resolved very easily if you clearly announce that everybody — Hindus, Muslim, Sikhs and Christians — will get citizenship as a result of the CAA,” said Bose, who contested but lost the Lok Sabha polls last year from the Kolkata South constituency.

The legislation, which has come into force on January 10, has led to countrywide protests, with students coming out on the streets in thousands in almost all the states. Civil society members, anti-BJP political parties and commoners have also joined the protests

Bose wants that his party should go to the people on this issue.

“We have to go to the people and reason with them. You can”t implement an Act through intimidation and threats,” he said.

Bose, who is the grand son of Netaji”s elder brother and freedom fighter Sarat Chandra, said using abusive words to attack protestors does not befit a party like the BJP.

“Just because we have the numbers in both Rajya Sabha and Lok Sabha, does not mean we are at liberty to take such an aggressive approach. Today we are in government, tomorrow we may not be there.

“Attacking those opposed to us in this manner, does not befit us,” he said.

A section of the BJP leaders, including its state unit chief Dilip Ghosh, has been hurling choice epithets on intellectuals and celebrities who have hit the streets in Kolkata and elsewhere in the country.

Days back, Ghosh had described these intellectuals as “creatures”, “devils” and “parasites”.

Bose, however, also expressed his opposition to the state governments run by the non-BJP parties announcing they won”t implement the CAA.

“After an Act is passed in Parliament, and it is notified, then it is the responsibility of the state government to implement it. If anybody has questions about the legislation, then the Supreme Court can be approached.

“A number of state governments, including the Trinamool Congress government in West Bengal, are saying they don”t accept this Act. This is legally not correct. A state government can”t perform an illegal act,” said the 59-year-old, an Economics degree holder from the Hendon College of London.

Ghosh came down heavily on Bose for his statements, and asked him to win an election first.

“Who has made him a leader? How many votes did he get? First, let him win a Panchayat election at least, then he can talk big,” said Ghosh, himself a Lok Sabha member.

Hours after the BJP’s massive rally in Kolkata in support of the controversial Citizenship Amendment Act (CAA), Chandra Kumar Bose, BJP vice president for West Bengal and grandnephew of Netaji Subhash Chandra Bose, raised questions against the law, asking why it does not include Muslims.

Urging the Narendra Modi government to remain “transparent”, Bose tweeted on Monday, “If #CAA2019 is not related to any religion why are we stating – Hindu,Sikh,Boudha, Christians, Parsis & Jains only! Why not include #Muslims as well? Let’s be transparent.”

If #CAA2019 is not related to any religion why are we stating – Hindu,Sikh,Boudha, Christians, Parsis & Jains only! Why not include #Muslims as well? Let’s be transparent13.8K12:14 AM – Dec 24, 2019 · Kolkata, IndiaTwitter Ads info and privacy6,455 people are talking about this

In a subsequent tweet, he said, “Don’t equate India or compare it with any other nation- as it’s a nation Open to all religions and communities.”

The BJP leader said there is no harm in including Muslims because “if Muslims are not being persecuted in their home country they would not come” to India. “However, this is not entirely true- what about Baluch who live in Pakistan & Afghanistan? What about Ahwadiyya in Pakistan?” he said.

If #CAA2019 is not related to any religion why are we stating – Hindu,Sikh,Boudha, Christians, Parsis & Jains only! Why not include #Muslims as well? Let’s be transparent

If Muslims are not being persecuted in their home country they would not come,so there’s no harm in including them. However, this is not entirely true- what about Baluch who live in Pakistan & Afghanistan? What about Ahwadiyya in Pakistan?2,2739:39 AM – Dec 24, 2019 · Kolkata, IndiaTwitter Ads info and privacy1,020 people are talking about this

His dissent comes at a time when the BJP is going all out in support of the newly-enacted law and took out a massive support march in West Bengal on Monday.

Addressing the rally to “thank” the Modi government on the new citizenship law, Nadda skirted the issue of nationwide NRC, days after advocating for it.

“They are only bothered about securing their vote bank rather than national interest. They are not bothered about pains and agony of the refugees who are coming to this country to save their lives and honour,” he added.

Nadda also hit out at Banerjee for “inaction” over violence that rocked the state during protests against the citizenship law.

Asserting that the turnout is a proof of public support in favour of the CAA, Nadda said Mamata Banerjee might work against the interests of the masses but the people of the state are very much in support of the new law.

Taking a swipe at the opposition parties, Nadda said Manmohan Singh had in 2003 appealed to then Union home minister L K Advani to allow minorities from Bangladesh and Pakistan seek refuge in the country. “But now when our government has passed a law to do the same thing, they are opposing it.”

The senior BJP leader claimed that Muslims have flourished in India, but Hindus have suffered torture in Pakistan.

The contentious law has been a major political flashpoint with Banerjee declaring that it will not be implemented in the state, inviting strong criticism from the BJP.

Slamming Banerjee for opposing central schemes, Nadda said just for the sake of scoring political points she didn’t allow Ayushman Bharat and insurance policy for farmers to be implemented in Bengal.

“We removed oppressive triple talaq and gave freedom to Muslim sisters but she opposed that too. In her attempt to oppose the BJP, she is opposing each and every thing that is in interest of the nation,” he said.

The Dirty Picture or how not to be a Porngate hypocrite
‘Force Snapdeal to dump Aamir Khan: BJP IT chief told social media cell’ #WTFnews
CAUGHT ON CAMERA - Chhattisgarh police official admits scripting case against tribals
Rohtak: Cops arrest 3 who had harassed girls on bus #‎Vaw‬