Why should we oppose the Citizenship Amendment Act? 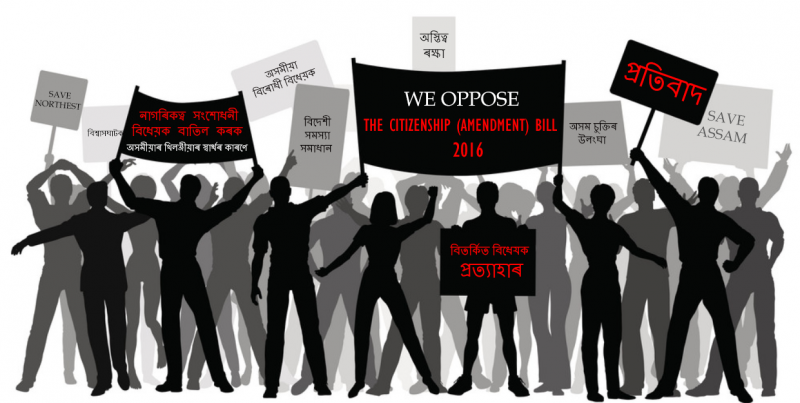 This is an amendment to the Citizenship Act of 1955 that seeks to offer Indian citizenship to Hindus, Sikhs, Buddhists, Jains, Parsis and Christians hailing from Pakistan, Bangladesh and Afghanistan, provided that the person should have entered India on or before 31 December 2014

What are the stated objectives of the Act? The constitutions of the three neighbouring countries namely Afghanistan, Bangladesh and Pakistan provide for an official state religion, which happened to be Islam. The religious minorities in these countries live under the threat of state sanctioned persecution. To quicken the process of granting citizenship to these people, certain amendments are required to the Citizenship Act, 1955.

Why is the Act Communal ?

Only 3 countries from the 7 countries that share land borders with India are conveniently chosen. Afghanistan, a country that shares a land border of 106 km is included while China – which shares a 3,488 km border – besides Bhutan, Myanmar, Nepal are excluded.

All the selections, and omissions group together, pushing the Act in one direction. The deliberate exclusion of Muslims is the overarching vision of this Act, and not an unintended consequence.

What are the problems in the Act?

The act takes for granted that the six religious minorities – Hindu, Sikh, Buddhist, Jain, Parsi, Christian – from the countries of Afghanistan, Bangladesh and Pakistan are the only groups of ‘persecuted minorities’. This assumption is wrong on so many counts.

Religious minorities in other countries also face state persecution. The massacre of the Rohingyan Muslims in Myanmar that resulted in the worst refugee crisis of the day is an example. The atrocities on Uighur Muslims in China shows that a state need not even have any religious affiliation to persecute specific religions.

There are sections within the majority religions in some of these countries that face persecution. The Ahmedis in Pakistan are not even recognised as Muslims by the state of Pakistan.

Religion is not the only identity that can invite persecution, as this Act assumes it to be. How could the massacre of Sri Lankan Tamils be any less horrifying than the attacks on any of these religious minorities?

How is CAA related to NRC?

When the NRC in Assam was released on 31st August 2019, around 1.9 million people were found excluded, more than one million among whom were Hindus. With the enactment of CAA, the excluded Muslims alone will now be considered as illegal migrants, while non-Muslims will be given privileged amnesty provided they can prove that they are hailing from any of the three aforementioned countries.

The constant reiteration by the Home Minister that no Hindus, Sikhs, Buddhists, Jains, Parsis and Christians will be excluded proves that the CAANRC combination is designed as an Inquisition trial for the Muslims. It can become a dangerous weapon in the hands of local officials to harass and intimidate Muslims.

Millions of people in Assam are living under the grip of fear. The government is well aware that if scaled up to the entire nation, NRC can be utterly unpopular and can invite severe backlash. The insidious aim behind CAA is to prevent any secular resistance to happen, as the communities who are guaranteed leniency are unlikely to stand in solidarity with the Muslims who will be excluded.

Why is the Act Unconstitutional?

Article 14 of Indian Constitution reads, “The State shall not deny to any person equality before the law or the equal protection of the laws within the territory of India”. It is to be specifically noted here that the article is not confined to the citizens but to every person within the territory of India.
The citizenship in India is conferred by birth, by descent, by registration, by naturalization etc. This act, to quote the opposition, creates another category called arbitrary executive fiat. ‘No Muslims please’ is the only coherent message that comes from this Act.

How will the Act impact the lives of people? India is a country where people and communities with very diverse culture and history live together. Constitutional provisions to accommodate such diversities are indispensable.
Efforts like CAA and NRC which unilaterally violate such constitutional and legislative procedures can only end up in political, cultural and social mayhems, as it is unfolding in Assam and North Eastern states.

Why CAA-NRC eerily resembles some of the most notorious events in history?

The history of genocides reveal that they were almost always preceded by sectarian citizenship laws. The Burma Citizenship Law 1982 which gave the state the power to define “national ethnic groups”, effectively turned the Rohingya Muslims in Myanmar into non-citizens, an act whose consequences we are currently witnessing.

The infamous Nuremberg laws passed by the Nazi Germany in 1935 were followed by forcefully requiring the Jews to adopt the middle names of ‘Sara’ and “Israel’, to carry an additional stamp of ‘J’ in their passports, to always wear a band of ‘Star of David’ or a Yellow Star on their overcoats, before it all culminating in the “Holocaust”, what is generally considered as the worst crime in human history in which approximately 6 million Jews were annihilated.

Against this backdrop, the hate-filled rhetoric accompanying the CAA-NRC cannot be overlooked.