Why we oppose ‘The Gujarat Control of Terror and Organised Crime Bill, 2015’ 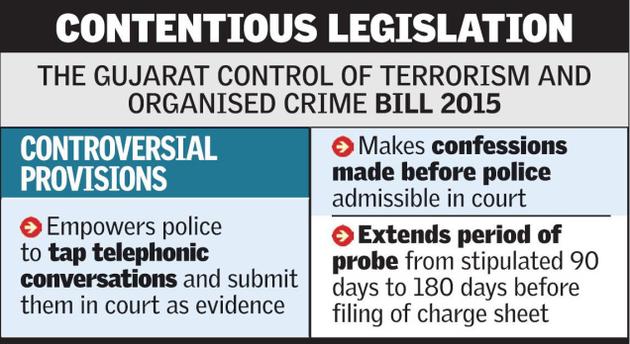 The Gujarat Control of Terror and Organised Crime Bill, 2015 (“the GUJTOC Bill”), now awaiting for the President’s assent, violates principles of civil liberties and the constitution both in spirit and its fine print.

It draws heavily from the now repealed Terrorism and Disruptive Activities (Prevention) Act (TADA) and Prevention of Terrorism Act (POTA), both of which faced criticism and were ultimately repealed because of allowing the state to violate principles of civil liberties and human rights. The present GUJTOC Bill, however, is even worse and goes a step further in mortgaging civil liberties as compared with the repealed TADA, POTA and the Maharashtra Control of Organised Crime Act, 1999 (“MCOCA”). Arun George, writing for news portal, www.firspost.com rightly points out that the GUJTOC Bill is a revamped version of the Gujarat Control of Organised Crime (GUJCOC) Bill that was returned unsigned by the president on two earlier occasions.

The BJP led Gujarat government had tried and failed to get the GUJCOC Act passed since Narendra Modi took over as the chief minister of Gujarat in 2001. Then president APJ Abdul Kalam and Pratibha Patil both rejected the bill in 2004 and 2008, respectively, after Government suggested amendments in provisions related to telephone interception and confessions made to a police officer would be admissible as evidence in court. The new Gujarat bill is veiled as a law that seeks to curb both organised crime and terrorism in the state, but as should be clear from the above, in practice, it will amount to a no-holds-barred attack on free speech, and due to its vague language, the act will be a codified a means for police intimidation to squash opposition to executive policies and governmental decisions could be construed as a “terrorist act.” This is particularly relevant in the current climate of contentious environmental & labour policies and government/corporate land grab dividing the current government and ordinary people.

The proposed legislation is draconian and will give the government not only a means to intimidate minority communities as was seen during the POTA era, but also a means to suppress all dissenting voices, opposition mass movements, effectively crushing people’s voice against government’s anti-people policies. It will open the flood gates for state repression and state-sponsored terrorism. POTA, in its short life of a little over two years, was the legal means to register 287 cases in Gujarat – all against Muslims, barring one case; a similar pattern was observed with TADA, which was misused heavily in Punjab as well as in Gujarat to large extent.

In 2015, the opposition abstained from voting on the bill in the Gujarat state assembly, yet the GUJTOC bill made its way through brute majority and now awaits President’s assent.

In brief, we are opposing this proposed act because it violates every principle of civil liberty, human rights and Indian Constitution. The most worrisome aspects of the proposed GUJTOC are:

Governments and the Indian State have de-facto declared a war against any opposition, and in doing so, it is a war against all such organisations and activists who have taken up the struggle to defend the cause of Justice and Human Rights on various people’s issues. Through its many vices—including the loose definition of “terrorist act,” the constitution of special courts that trump the rest of the legal system, the legally sanctioning spying and torture of citizens, low bar of evidence (i.e. police-obtained confession), lengthy custody with the prevention of bail, presumption of guilt—this act is a danger to democracy. The Government is trying to create legal mechanisms to suppress people’s movements by enacting such laws.

It is time for all movements, organisations and activists to give a united fight against such laws. It is time to show our united strength against the fascist forces.

We, the concerned citizens and activists resolve to continue our fight for Justice and Truth, to uphold the values of Human Rights, to stand up and speak-out for the oppressed against injustice of all kinds, unafraid of all consequences.

Somnath Bharti - AAP true colors -racism and violent vigilantism against women
Why Obama should stop pushing nuclear energy on India
One BJP MP calls Godse a ' Nationalist', another supports mass conversions for Dec 25
Ahead of Trump's Visit to India , RKM will stage a nationwide protest against proposed India-US trad...