The truth is that almost all Indian prisons are far from compatible with Minimum Human Rights standards.

The latest twist in the Mallya affair has been a cause of much indignation as well as mirth. The London extradition court, on July 31, 2018, called for a proper video showing adequate access to natural light and fresh air at Mumbai’s Arthur Road Jail. While some edit writers angrily want the United Kingdom to look at its own jails, cartoonists are having a field day caricaturing how Vijay Mallya could sunbathe in jail.

The ire of people yearning to bring a privileged rogue to justice is understandable. Mallya should not be allowed to go scot free. The bitter truth, however, is that it is often celebrity moments like this that serve to shed light on the country’s miserable human rights record and even provide the push to make some amends.

When Judge Emma Arbuthnot of the Westminster Magistrates’ Court asked for better evidence that minimum prison conditions would be complied with at Arthur Road, she was only acting according to a well-settled position in British law.

It is in accordance with Section 87 of the UK Extradition Act, which requires the Judge to decide whether the extradition would be compatible with European Human Rights Convention rights and compliance with their Prison Rules.

Much of the discussion in the Indian media seems to suggest that British courts are unfairly demanding European standards from Indian prisons. However, the Indian government too is party to the adoption in 2015 by the UN General Assembly of the United Nations Minimum Rules for the treatment of Prisoners (the Nelson Mandela Rules) which stipulate similar conditions.

Judge Arbuthnot’s specific concerns are reflected in Rule 14 of the Nelson Mandela Rules which requires that “windows shall be large enough to enable the prisoners to read and work by natural light and shall be so constructed that they can allow the entrance of fresh air”. The truth is that almost all Indian prisons and particularly Arthur Road Jail are far from compatible with Minimum Human Rights standards. On the particular aspect of “natural light” and “fresh air”, the High-Security areas of Arthur Road are extremely deficient.

Vernon Gonsalves, one of the co-authors of this piece has had personal experience in this regard. His first realisation of the impact of this deficiency came on the day he and his co-accused, Sridhar Srinivasan were produced in court after a gap. One of the defence lawyers, who had first seen them immediately after arrest, commented, “You guys are looking fair”.

This newly acquired complexion was however not some fairness cream creation. They had by then spent some months in Barrack No 5 of the High-Security Anda Circle of the Arthur Road Jail. This is a single-cell barrack which had housed Abu Salem during the first few months after he had been extradited from Portugal. Its architecture prevents direct sunlight from reaching the cell or even the 10×3 feet patch that passes for a barrack courtyard. This had brought about the paleface look.

Anda Barracks 1 to 4 are only slightly better off. Here too the sun cannot reach any of the cells. It however pays short visits to some corners of the courtyards. As barracks are always overcrowded and only a few can get a chance, there is a rush to catch a place in the sun.

Proper access to sunlight was only possible after obtaining medical sanction or a court order. The patient would then be let out of the barrack and allowed to stand for a specified period near the Anda Circle watchtower which is exposed to the sun. In the absence of sunlight, reading is only possible with artificial light. The tube-lights are on twenty-four hours.

Cross ventilation and fresh air in the Anda is non-existent. All the cells of the Anda Circles in the prisons of Maharashtra have been built without windows. These cells, constructed from the 1980s onwards, have only security in mind.

They have even ignored the stipulation of the Maharashtra Prison Manual that requires free and thorough ventilation “by the provisions of large barred doors and windows constructed in opposite walls”. The substitute for windows are densely meshed holes of less than six-inch diameter placed very high up on the wall facing the gate. These “openings” are normally blocked by birds’ nests and other accumulated dirt, preventing any passage of air. Fans too only came in 2011.

Worse than Anda Circle is Circle no 12, which was reconstructed in 2009 for Ajmal Kasab, then facing trial in the 2008 Mumbai attacks case. Security agencies had found that new under-construction high-rise towers coming up in the jail’s vicinity offered direct line of sight into some corners of the Anda, making those portions potentially vulnerable to a sniper attack. Kasab, who was first kept alone in the six-cell Anda Barrack No 1 was soon shifted to the seven-cell Anda Barrack No 4 for this very reason.

The solution finally thought up was to construct a completely enclosed barrack, which could keep Kasab closeted away from sniper bullets. For good measure, the place was encased in steel sheeting – apparently to make it bomb proof. Obviously natural light and fresh air was nowhere a priority in the plan. Being totally cut off from the outside world, no one heard of any complaint from Kasab till his execution in November 2012.

However, the next occupant – Zabiuddin Ansari, another accused in the same 2008 Mumbai attacks case – went on a two-month hunger strike in 2015 protesting his prison conditions. He even petitioned the Supreme Court stating that he was “being detained in a cell without windows, illuminated only by a high-voltage electric bulb that is never switched off, making the cell seem like a “furnace”. Amnesty International too campaigned on his behalf. There were however no reports on any major change made in this regard. 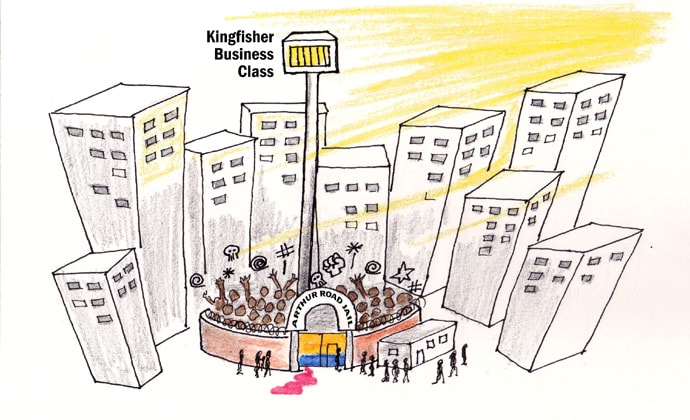 This is where Mallya is proposed to be lodged. Later entry of VIP prisoners in this section has seen the addition of facilities like western style commodes. There can, however, be no solution to the lack of natural light and fresh air. The government seems to have tried to get around this by manufacturing photographs of a naturally lit and well-ventilated setting that does not actually exist.

Judge Arbuthnot, however, caught them in the act. The Times of Indiareports that she pointed out that a shadow cast by a “distinctively shaped grill above the door” to the barrack “does not appear to be the sort of shadow cast by natural light”.

In fact, she plainly charged the Indian side with fabrication and manipulation. “The only way of getting that photo is to shine a bright light through that grill and open the doors to get it shining into the barrack. That cannot be a photo of natural light on any view,” she said. “There is no angle of the sun that I can conceive of other than by manipulation of the doors where light is shining in that way.”

Going by these observations of the London court and the actual lack of light and air in the cells of Circle No 12 of Arthur Road, the government is likely to have a tough time at the next court date. The British judiciary may not also be inclined to be lenient with a state that has already sullied its reputation by violating its extradition treaty with Portugal in the Abu Salem matter.

The media has quoted unnamed Home Ministry officials who asserted that Arthur Road Jail was one of India’s best – a tall claim for a place that is horribly overcrowded with nearly 3000 inmates for a capacity of 804, ie over three and half times the limit. They want to convince the UK court that prisons in India were as good as in any other country in the world and prisoners’ rights were fully protected in Indian jails.

This sound more like bravado and bluff and will call for further fabrication at the next hearing. The reality is that Indian prison conditions are inhuman and the government is doing precious little about it. The dismal factual situation is disclosed at every hearing of an ongoing five-year-old writ petition in the Supreme Court initiated by former Chief Justice of India, RC Lahoti, entitled Re-Inhuman Conditions in 1382 Prisons.

Meeran Chadha Borwankar, who was in charge of all Maharashtra Prisons, including Arthur Road, for over three years between 2012 and 2015 has a more honest response to the UK Court’s directions. She, in a signed article, squarely admits that “In fact, the prison administration in most states is understaffed and overworked, while prisons are overcrowded. The facilities are too basic, and even hygiene is a serious issue. Skin and pulmonary infections are common; medical facilities are average to poor.”

She suggests that “the UK court can be told that the facilities at Arthur Road are very basic, and Vijay Mallya, having been brought up in India, cannot feign ignorance. …It’s now time for him to reap what he has sown. Barrack No 12 at the Arthur Road Jail, is waiting for an undertrial — not a VIP.”

Such bluntness will certainly not bring Mallya back. It could, however, save our country the ignominy of being called a liar by a foreign court. It could help us to more sincerely confront our human rights abuses and start us on the path of rectifying them.

India: Authorities should investigate the custodial death of Adivasi youth in Chhattisgarh
Tiananmen Square 25 years on: 'Every person in the crowd was a victim of the massacre
India - 'Do you really want the poor to pay even to shit?'
48 deaths, but MP BJP chief has no regrets over Vyapam #WTFnews