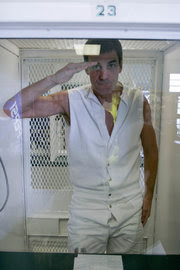 On Dec. 3, Texas plans to execute an inmate named Scott Panetti, who was convicted in 1995 for murdering his in-laws with a hunting rifle. There is no question that Mr. Panetti committed the murders. There is also no question that he is severely mentally ill, and has been for decades.

During his capital murder trial, at which he was inexplicably allowed to represent himself, Mr. Panetti dressed in a cowboy suit and attempted to subpoena, among others, John F. Kennedy and Jesus Christ. A standby lawyer said his behavior was “scary” and “trance-like,” and called the trial “a judicial farce.”

It was not an act. Mr. Panetti, now 56, was first diagnosed with schizophrenia when he was 20, and in the years before the murders he was hospitalized several times for delusions and psychotic episodes.

In this respect, he is no different from the estimated 350,000 inmates around the country with mental illness — 10 times the number of people in state psychiatric hospitals. But Mr. Panetti is not just another insane prisoner; his name is synonymous with the Supreme Court’s modern jurisprudence about mental illness on death row. In Panetti v. Quarterman, decided in 2007, the justices held that it is not enough for a defendant simply to be aware that he is going to be executed and why — the previous standard the court had used in permitting the execution of the mentally ill. Rather, he must have a “rational understanding” of why the state plans to kill him.

Noting Mr. Panetti’s “well-documented history of mental illness,” the court held that capital punishment serves no retributive purpose when the defendant’s understanding of crime and punishment is so distorted that it “has little or no relation to the understanding of those concepts shared by the community as a whole.”

For example, Mr. Panetti understood that the state claimed the reason for his death sentence was the murder of his in-laws, but he believed the real reason was “spiritual warfare” between “the demons and the forces of the darkness and God and the angels and the forces of light.”

But the justices refused to set precise guidelines for determining whether someone is competent enough to be executed, and they did not overturn Mr. Panetti’s sentence. Instead, they sent the case back to the lower courts for a fuller reconsideration of his current mental state.
By any reasonable standard — not to mention the findings of multiple mental-health experts over the years — Mr. Panetti is mentally incompetent. But Texas, along with several otherstubborn states, has a long history of finding the loopholes in Supreme Court rulings restricting the death penalty. The state has continued to argue that Mr. Panetti is exaggerating the extent of his illness, and that he understands enough to be put to death — a position a federal appeals court accepted last year, even though it agreed that he was “seriously mentally ill.”

Mr. Panetti has not had a mental-health evaluation since 2007. In a motion hastily filed this month, his volunteer lawyers requested that his execution be stayed, that a lawyer be appointed for him, and that he receive funding for a new mental-health assessment, saying his functioning has only gotten worse. For instance, he now claims that a prison dentist implanted a transmitter in his tooth.

The lawyers would have made this motion weeks earlier, immediately after a Texas judge set Mr. Panetti’s execution date. But since no one — not the judge, not the district attorney, not the attorney general — notified them (or even Mr. Panetti himself), they had no idea their client was scheduled to be killed until they read about it in a newspaper. State officials explained that the law did not require them to provide notification.

On Nov. 19, a Texas court denied the lawyers’ motion. A civilized society should not be in the business of executing anybody. But it certainly cannot pretend to be adhering to any morally acceptable standard of culpability if it kills someone like Scott Panetti.