It happened in a classroom, on the desks of the village school. It was dark, so the doctor operated on the women by torchlight. The procedure only took two minutes; many women did not even know that they had been permanently sterilised.

That Saturday night, in January 2012, 53 women from the village of Kaparfora in the northern Indian state of Bihar had tubectomies over a period of two hours, under the supervision of a local NGO. The school desks where the operations took place were never disinfected; the doctor never changed his gloves, and the medicines were past their use-by dates, violating a number of government guidelines. After the operations, the doctor left the school, ignoring the wails of the bleeding women in the classroom.

Devika Biswas, a health activist from the region, who visited Kaparfora a month after the event on a fact-finding mission, says she was “aghast” at the conditions she saw. “I was feeling so bad. I thought, is this my country? Not a single woman was screened to see if there would be any complications. One of the women who was sterilised was actually three months pregnant, and she ended up miscarrying her baby. I mean, they were just butchering women.” 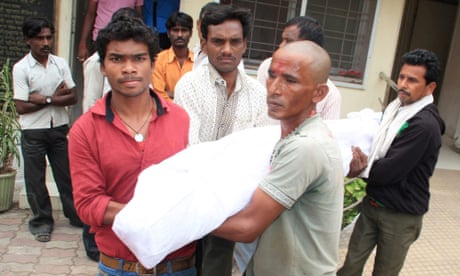 Biswas recalls the words of one woman she met in the village. “She looked sad so I asked her to speak her mind. She said to me, ‘The government puts no value on our lives, so they can do anything to us.’”

Biswas filed a petition to the supreme court based on her findings. After a four-year legal battle with the government, this September the court ordered the government to shut down sterilisation camps across India within three years. Though women can still go to health clinics and request to have tubectomies, sterilisation camps run either by state government officials, or outsourced to local NGOs, in which doctors go out to villages and encourage women to have their tubes tied, will be illegal.

The supreme court’s verdict is a historic victory for women’s rights activists who have campaigned against sterilisation camps for decades. The ruling could mean that, for the first time, India moves away from family planning policies that focus on women rather than men and provide a wider range of contraception, particularly in rural clinics.

The judge told state governments to increase compensation payments to victims of botched surgeries. “It is time that women and men are treated with respect and dignity and not as mere statistics in the sterilisation programme,” wrote Justice Madan Lokur in the judgment.

India’s controversial sterilisation drives, funded by the World Bank, USAID, and other international organisations have been at the core of the country’s efforts to minimise population growth since the 1980s. Unlike China, where, until last year, a strict one-child policy has slowed population growth, India’s government offers cash incentives to women and men who choose permanent sterilisation in an attempt to bring down the national fertility rate.

Quotas for sterilisation and cash incentives to doctors and village health workers who bring women to camps have led to mass operations – sometimes even on very young women in their early twenties – increasing the risks of infection and poor care. The sterilisation camps became a national embarrassment when 15 women diedafter botched tubectomies in the northern state of Chhattisgarh.

The focus on permanent sterilisation comes from a long-rooted belief that overpopulation is at the heart of India’s major problems of hunger, poverty, poor education and poor healthcare. India has the world’s second biggest population after China, 1.25 billion people, roughly equivalent to the populations of Europe and North America combined.

While family planning clinics around the country offer free oral contraceptives, IUDs and condoms, these methods are unpopular and associated with promiscuity. Vasectomies, cheaper and easier sterilisation procedures for men, are available too, but the stigma of being unmanly, and the memory of former prime minister Indira Gandhi’s fertility control drives in the 1980s, in which millions of men were forcibly sterilised, have stuck.

India’s sterilisation camps must give way to proper family planning

India sterilises more women than any other country in the world. “The government’s strategy has always been female-focused,” explains Sarita Barpanda, from the Human Rights Law Network.

“All the programmes are targeted at them. Many women are coerced into having sterilisations. The fact that the government has given so much of the responsibility for sterilisations to private organisations suggests how valuable a woman’s life is.”

Barpanda has further stories of atrocities during the sterilisation drives around the country. “In Orissa, they used bicycle pumps in the operations because the doctors did not have up-to-date medical equipment,” she says. “In Himachal Pradesh, one doctor did five surgeries and then passed out drunk halfway through the sixth. In Malda, in West Bengal, they had no beds for the women, so they had to lie out on the ground, in the cold after the operations,” says Barpanda. “Almost every state was reporting violations of the government’s sterilisation guidelines.”

In 2007, the supreme court ruled that the national government was responsible for maintaining standards in sterilisation procedures. It also asked state governments to introduce quality control commissions to ensure high standards in family planning clinics and camps, but these bodies have not been established.

In a statement to the Guardian, a spokesperson from the Ministry ofHealth and Family Welfare said the botched sterilisations were “a one-off” and were the exception rather than the rule.

The ministry said it had made many attempts to improve standards at state-run sterilisation camps. “The government of India has formulated several manuals and regular updates for the guidance of the state governments and union territories to address all aspects of conducting sterilisation procedures. The government of India has also issued advisories to all the states and union territories to adhere to the standard operating procedures at all levels to prevent and pre-empt incidents that might adversely affect the health of clients due to sterilisation procedures. These have been extensively disseminated across states.”

The spokesperson said that the supreme court’s decision to phase out sterilisation camps was “in alignment with the government of India’s own endeavour in that direction over a period of three years”.

Contraceptives were being offered free of charge to any couples wanting them, added the spokesperson, and the government is increasing access to family planning.

But Biswas says she doubts the supreme court’s order will make much difference. “The government is responsible – they are perpetual violators of the rights of women in this country, but I just don’t think anything will change.”

Barpanda is more optimistic. “They’ve already stopped the camps in Orissa,” she says. “This was a really big thing for the supreme court to pass. But I don’t know if I would call it a victory because so many people have lost their lives.”https://www.theguardian.com/global-development/2016/oct/26/will-closure-india-sterilisation-camps-end-botched-operations-supreme-court