Will the NIA ‘Supplementary Chargesheet’ End the Confusion on the Malegaon Blasts?

BY VAPPALA BALACHANDRAN The agency has claimed the Maharashtra Anti Terrorist Squad invented the Hindu terror angle under political pressure. But facts indicate that Hindu fundamentalist organisations had begun to emerge in the state long before. 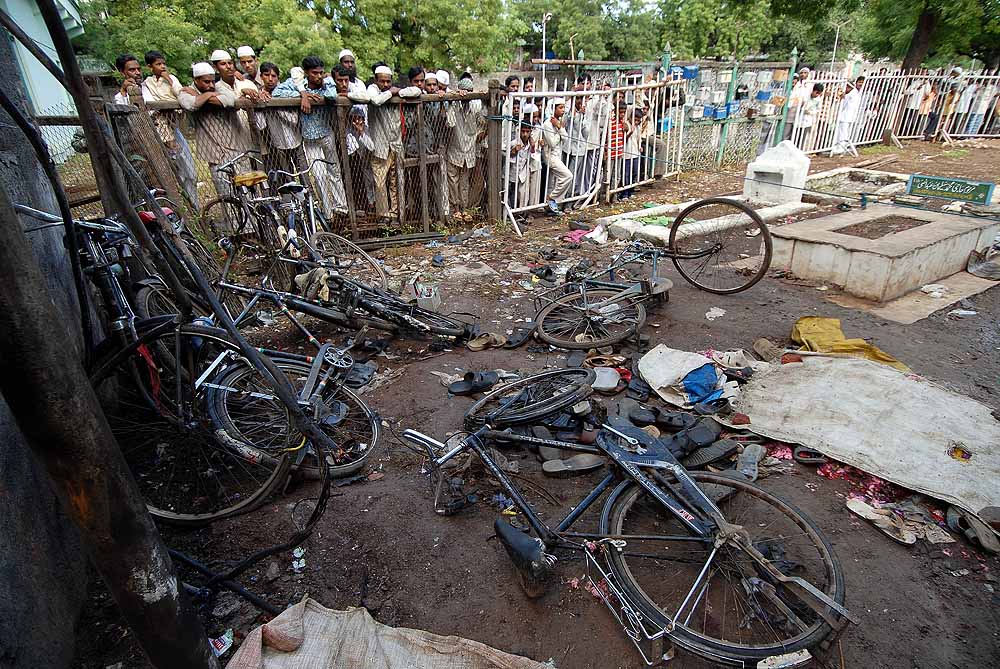 The NIA’s chargesheet on the 2008 Malegaon bomb blast case differs greatly from those previously submitted by the Maharastra ATS. Credit: PTI

It would seem that the National Investigating Agency (NIA) has transferred a big problem to the judiciary by submitting a “supplementary” chargesheet on May 13, 2016 in the 2008 Malegaon bomb attack case. The new chargesheet differs differs radically from the earlier two chargesheets submitted by the Maharashtra Anti Terrorist Squad (ATS) on January 20, 2009 and April 21, 2011 against 14 accused persons. It is now left to the court to decide on the case and to examine when to start proceedings after comparing about 5000 pages of evidence furnished by the ATS with what NIA has stated in their brief 133-page ‘supplementary chargesheet’.

The NIA, which took over the investigation in 2011, wants to lift the draconian Maharashtra Control of Organised Crime Act (MCOCA) and discharge six accused persons, including Pragya Singh Thakur. A brief three-page announcement of the ‘supplementary chargesheet,’ called the ‘final report’ by the NIA, was also published on their website and named 10 accused persons, including Lieutenant Colonel Prasad Purohit. They also said that no offence under the MCOCA was revealed. In any case the Supreme Court had already decided on April 16, 2015 that the MCOCA was not applicable in this case.

Soon after filing the NIA chargesheet, Mumbai was agog with rumours that Thakur and Purohit would be released immediately. It took a while before the public realised that the NIA had no power to discharge anybody and that only a competent court could do this, subject to judicial review.

While I have no intention to comment on the ATS and NIA investigations or on the merits of evidence, which is entirely left to the court, certain peripheral facts, which have created a public perception of political interference, need to be mentioned.

A series of twists and turns

The NIA cannot disown responsibility for the twists and turns in the case. The first development came in June 2015 when Rohini Salian, the then special public prosecutor in the case, had declared her intention to resign due topressure on her “to go slow” in the case, after “the new government” came into power. In October 2015 Salian filed an affidavit naming the NIA officer who had advised her to “go slow”. This was during the course of a contempt petition filed by a litigant in the Bombay high court against the NIA for “tending to hamper the judicial process” resulting in “weakening of the prosecution case”. Earlier this month, NIA chief Sharad Kumar told a leading daily that Salian was dropped on a review of her performance. This might be quite surprising for the Maharashtra police officers who had watched her successful prosecuting abilities in sensational cases like the 1992 JJ Hospital shooting case in which a Dawood gang member was sentenced to death. 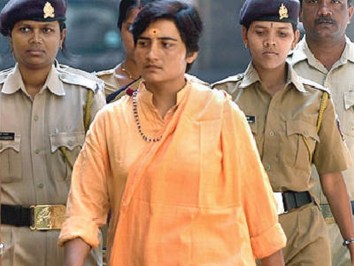 The NIA is seeking to discharge Sadhvi Pragya Thakur, an accused in the 2008 Malegaon blasts. Credit: PTI

In addition, leaks started appearing in the media in April that the statements of seven witnesses in the case recorded before a magistrate had gone missing from the Special NIA court. The missing documents included a witness’s statement on a meeting between an accused and Thakur in Ujjain just months before the 2008 blasts, as well as a statement purportedly by an Abhinav Bharat office bearer on a meeting between Purohit and Thakur in Nashik in 2007. The reports also said the NIA had formed three teams to search for the missing documents. Till today it does not appear that the NIA has issued any official statement on the veracity of this report. It is a long standing tradition in our country to keep the public away from matters of public safety. However, another report appeared on May 4 that the witnesses had disowned their earlier statements when their fresh testimonies were recorded by magistrates in New Delhi. The same tabloid published a story on May 14 that the missing statements were “at the centre of grand collapse of case”.

In their brief announcement, the NIA said that since some of those accused had filed petitions in higher courts, including on the applicability of the MCOCA in the case, they could not conduct any investigation until April 2015 “when the apex court adjudicated on them”. The NIA also claimed to have arrived at the new conclusions after “a pain staking and professional investigation”. This did not prevent the media from publishing reports that the NIA had described “[Hemant] Karkare’s probe dubious” and that NIA had junked the ATS investigation. Another report appeared on May 14 that Purohit had complained to the national security adviser about the injustice done to him. The same report also carried a statement by former Mumbai Police Commissioner Satyapal Singh, now a BJP member of parliament, that Karkare “arrested Pragya Thakur as he ‘succumbed’ to political pressure from the Congress & the NCP”.

Surprisingly, many reports also claimed the NIA had relied on some evidence collected by the ATS. On May 15 there were reports that the NIA had included in their chargesheet that “Purohit had floated Abhinav Bharat organization in 2006 in spite of being a commissioned officer of the Armed Forces of India, which is against rules” and that he wanted to form a government in “exile” in some foreign countries. The report also quoted that there was still evidence against Purohit for his prosecution.

Did the Maharashtra ATS under the late Karkare invent the Hindu terror angle under political pressure as is alleged? Unfortunately, Karkare is not around to defend himself, having been assassinated in the 26/11 Mumbai attack. The way inspired leaks have maligned his reputation now is very regrettable. Also, facts indicate that the Hindu terror angle had cropped up long before Karkare took charge of the ATS in January 2008. For this we need to analyse the history of that era.

Terrorist attacks using hidden improvised explosive devices had occurred across the country in 2006, 2007 and 2008, mostly in public places like trains and markets. Eight bombings in 2006-2007 in which 449 people were killed, including the September 2006 Malegaon mosque bombing (38 killed) and the Samjhauta Express bombing in February 2007 (58 killed), were initially treated as “anonymous” with suspicion on different factions of the outlawed Students Islamic Movement of India (SIMI). In 2008, 159 deaths were recorded from around the country in bomb blasts, including the May 13 Jaipur blast in which 63 people were killed. Two days after the Jaipur blast a previously unknown “Indian Mujahideen” (IM) claimed responsibility for these blasts. Investigation later connected most of the previously “anonymous” blasts to the IM, which is considered as an off shoot of SIMI.

However, two bomb blasts in these series, both taking place on September 29, 2008, made the suspicion fall on Hindu groups; motor cycle bombs were placed near mosques in Malegaon (Maharashtra) and Modessa (Gujarat), killing eight people.

Investigation at a higher level indicated that Maharashtra had seen the emergence of Hindu fundamentalist organisations from 2006 onwards. A serious bomb blast took place in Nanded on April 6, 2006 at the house of Laxman Rajkondwar, a Bajrang Dal activist, while they were fabricating bombs, resulting in two deaths. The ATS was entrusted with the Nanded case in May of that year and filed cases on August 24, 2006 against Hindu outfits.

In December 2008, the CBI took over the Nanded investigation and arrested Rakesh Dhawde who is still an accused by the NIA in the 2008 Malegaon blast case. Dhawde had provided arms training to those allegedly involved in the Nanded incident. Reports at that time revealed that these leads had emerged during the investigations into the Malegaon case, which led to the arrest of 11 people, including Purohit. If the CBI were to be believed, the Nanded blasts had connections with the Samjhauta, Malegaon, Mecca Masjid and Ajmer Sharif terror incidents.

Another bomb blast occurred in Nanded in February 2007 inside a bakery shop. Two persons died in the incident, including one from the Shiv Sena. While the police maintained that it was only a fire, the “Concerned Citizens Inquiry” headed by Justice (retd) B.G. Kolse Patil raised several uncomfortable questions against police apathy and connivance. Justice Patil said that the same police officer who had failed to investigate the second Nanded blasthad earlier ignored the April 25, 2003 bomb attack in front of a mosque in Parbhani, which had killed one and injured 40.

In 2008, Hindu fundamentalist organisations like the Hindu Janjagaran Samiti (HJS) were noticed planting bombs in theatres in Thane, Panvel and Vashi near Mumbai. On February 20, a bomb planted in Panvel during the screening of Jodha Akbar exploded without causing any injuries. In Vashi and Thane the HJS were protesting against the staging of a satirical Marathi play that did not portray the Mahabharata in favorable light. The Vashi bomb planted on May 31 did not go off while the Thane blast on June 4 injured seven persons. None of these cases are even on the police terrorist data base to be easily retrieved.

It is my assessment that the NIA chargesheet is not going to end the confusion on the 2008 Malegaon bomb attack or for that matter the linkage between several bomb attacks by Hindu groups from 2003.

Vappala Balachandran is a former special secretary, Cabinet Secretariat and was also member of the two-man high level committee to conduct an inquire into police performance during 26/11 terror attacks.