Will the two Union Ministers condemn Patanjali after WHO rejected its claim on Coronil being approved for Covid 19? 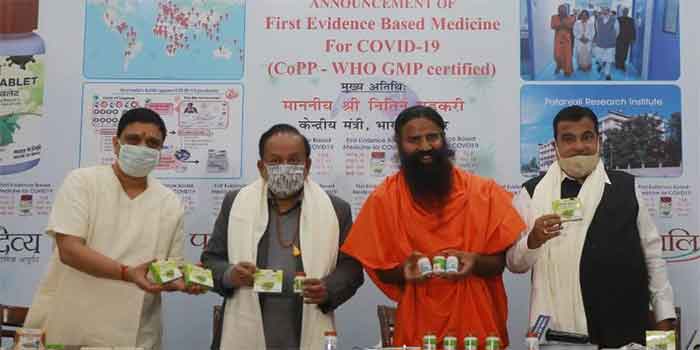 When a facebook notification came on my computer related to inaugural of Patanjali’s Coronil in the presence of two central Ministers, I was surprised because last year, when Ramdev claimed that his company has been able to find a medication for ‘ Covid 19’ after much ‘research’ and ‘testing’ on the patients but later Ministry of Ayush in the month of June 21, declined to give him permission to claim it a vaccine for Corona.

According to a report published in the Hindu, Ramdev says that the daily demand for Coronil is 10 lakh packs a day but Patanjali is unable to fulfil that as it can only supply one lakh packs a day. Now the question is how can such a product be allowed to be sold in the market ?

We all know that Ramdev is using religion and yoga to promote the dubious business and this government has been more than happy to promote him. Basically, they compliment each other. While one can ignore the other things related to Patanjali which makes tall claim but it is criminal to ignore, promote or encourage senseless or fake claims related to cure of Corona when scientists world over are grappling with it and when the world is fighting against one of the most lethal diseases which threatened our humanity.

The shameless and thuggish way that he claimed in the presence of two ministers that Coronil has got approval and clearance from the World Health Organisation shocked me. I felt that this government might have used its influence on WHO and probably that is why these Ministers are here. It was shocking to hear and what was a blunder was the presence of the Health Minister who did not utter a word that Coronil is not a treatment or medication to cure Covid 19. Ramdev claiming things in the presence of two ministers and their approval to what he said suggested that politicians are ready to lose international credibility for the sake of domestic constituencies.

The two ministers Nitin Gadkari and Harsh Vardhan became party to a fraud by Patanjali which shamelessly dragged the name of World Health Organisations. Ramdev and his company have flouted rules and regulations without any fear as they know that the ruling party is more than happy to promote and encourage him. He is the best example of how crony capitalism functions and what is the outcome when capitalism and religion mix together.

The Hindutva propaganda media was more than eager to jump on the fallacy of Ramdev Covid vaccination claim. These rogues actually are endangering the lives of millions of people by actively participating in #fakenews. For their fake nationalism they are ready to use the fakenews without ever checking its credentials. Unfortunately, when the Union Health Minister participates in it then it is seriously the issue of propriety and ethics. Both the Ministers must explain what prompted them to go to participate in the programme launched by Ramdev and why they allowed themselves to be used by him.

Ramdev’s fake claims have been rejected by the World Health Organisation. It is surprising for all as why should WHO give authorisation or certification but WHO today has become what NASA used to be once upon a time. We must not ignore that once a boy from Balia was congratulated in the UP Assembly in the year 2005 for topping ‘ International scientist Discovery’ conducted by NASA which later found out to be fake news. It is important to know how and why these fake news look ‘real’ and the answer lies in our ‘attempt’ to look the ‘best’ and ‘most outstanding’. I know we all love to be famed people, achievable and omnipresent and omnipotent yet there are realities whether we really deserve it without working harder.

It is good that the World Health Organisation issued a clarification that it has not given any certification to Patanjali research. Actually, all the TV channels who have been imposing the thuggish Patanjali on us need to explain their conduct. The shouting brigade of Sharmas, Chaudhries, Chaurasias, Dubeys, Tripathis, Devgans must be asked to explain their shameless behavior and being party to defame our country and dupe the people for buying a fake vaccine.
Indian Medical Association has sought clarification from Union Health Minister Dr Harshvardhan. IMA is rightly shocked and we are happy that it showed some spine at the moment when the Minister who himself is a well known doctor is seen in promoting a product which is neither certified nor scientific. IMA said : “Being the Health Minister of the country, how justified is it to release such falsely fabricated unscientific products to people of the whole country…can you clarify the time frame, timeline for the so-called clinical trial of this said anti-corona product?”

“The country needs an explanation from the minister. The Indian Medical Association will also write to National Medical Commission seeking suo moto explanation for his blatant disrespect to the code of conduct of Medical Council of India,” the IMA said.

We demand a ban on Patanjali products for persistently spreading fake and malicious propaganda regarding its product and violating all the business and medical ethics. The government must investigate the Patanjali products as well as its commercial practices to find whether or not they violate norms and ethics ? The two ministers M/s Nitin Gadakari and Dr Harshvardhan must explain their presence at the ceremony and should completely dissociate themselves with such unethical behaviour. Let us see whether the two ministers have the courage and conviction to do so ?