With Boss Yogi As CM, Hindu Yuva Vahini Is Hawking A Savvier Shade Of Hindutva 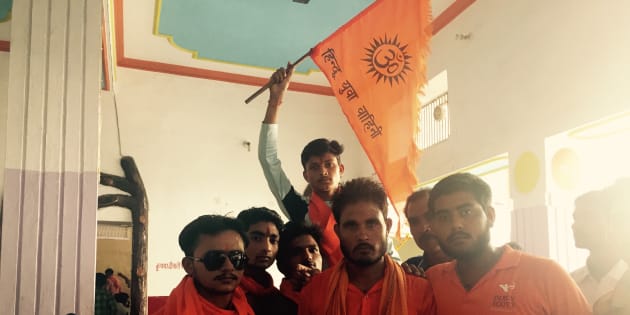 MEERUT/HAPUR/BULANDSHAHR — There was a time when Yogi Adityanath made brazenly communal speeches. “If they take one Hindu girl, then Hindus will take at least 100 Muslim girls,” he had declared on one occasion. “If they kill one Hindu, then we will kill 100.” Another time, at a rally organised by the right-wing group Hindu Yuva Vahini (HYV) that he had founded, Adityanath shared the stage with a speaker who said that Hindus should dig out the dead bodies of Muslim women and rape them.

Cut to this week when Nagendra Singh Tomar, dressed in a crisp saffron-coloured kurta and white pants, arrived exactly on time to attend a public meeting convened to mark his elevation as the HYV state secretary. His mood darkened at the sight of unpreparedness that greeted him. A handful of young men sporting saffron bandanas and clutching garlands were loitering in the hall. When they saw Tomar, some shouted, “Long live Lord Ram! Long live Hindu Yuva Vahini!” Tomar went from looking unimpressed to furious in a matter of minutes.

“Punctuality and discipline,” he later told a packed room. “We are an army, how can any army function without them.”

Addressing a series of meetings in Hapur and Bulandshahr districts in western Uttar Pradesh on Sunday, Tomar told hundreds of young men dressed in saffron-coloured clothes that they would be expelled from the organisation if they took the law into their hands. He made it quite clear that they were to report “anything wrong” such as cow slaughter and “Love Jihad” to the authorities or to their superiors if the police did not take any action. “There is no place in this outfit for those who are undisciplined or those who break the law,” he said. “The earlier governments did not listen to us, they would turn on us. But you can trust this government.”

With Adityanath becoming the chief minister of UP, the HYV has begun to emerge from its traditional eastern UP stronghold and is extending its influence across the state. However, its leaders now have the difficult task of keeping Hindutva issues on the boil, while minimizing the vigilantism HYV is known for. Chief Minister Adityanath’s desire to appear equanimous is making HYV careful about the way it speaks of the Hindutva agenda in public.

The two days that this reporter recently spent with HYV members in western UP revealed how the organisation was using smarter language and sophisticated messengers to drive the polarisation between Hindus and other religious communities. Its efforts did not involve ranting against Christianity and Islam, but creating a more subtle ‘us’ versus ‘them’ narrative that triggers exclusion rather than confrontation. The HYV is also aiming to widen the scope of Hindutva in order to bring about massive Hindu consolidation ahead of the next general election in 2019.

At one point in his speech in Bulandshahr, Tomar said, “Hindus, Muslims and Christians, we all have the same DNA. The only difference is that we are the bravehearts and they are the cowards who converted.” Hindus, he continued, no longer had to “kill” those who threatened Hinduism, but rather defeat them by “showing unity”.

Hindus, Muslims and Christians, we all have the same DNA. The only difference is that we are the bravehearts and they are the cowards who converted.

Tomar has a task on his hands, trying to project a softer but potent Hindutva. The triumphalist atmosphere in UP after Adityanath’s elevation as the CM, lends itself to bullying and intimidation by Hindutva’s foot soldiers. Tomar had devoted all of the previous week to convincing the media that it was not HYV members who had dragged out a Muslim man from his house on suspicion of ‘Love Jihad’.

A standard response of HYV leaders in the face of any controversy is that “those men don’t belong to the HYV.” The organisation has put all new applicants in a ‘wait and watch’ list for one year.

During the course of his 12-hour journey from Meerut to the border of Aligarh district, and then back again, Tomar spoke on issues and subjects ranging from Hindutva and Hindu mythology to his wife and two children.

I spoke with him at length on two occasions over the course of two days and Tomar never tired of responding to questions. The 50-year-old attributed his indefatigability to the two decades he spent responding to students at the DN Inter College in Meerut where he taught commerce. When he reaches his college now, Tomar wears white, leaving his Saffron outfit and avatar outside.

In our conversations, Tomar chose his words carefully. Speaking of Muslims and Christians, he stuck to script, touching on Love Jihad, the “lying” missionaries who duped Hindus into converting, and Muslims who were trying to outnumber Hindus by out-procreating them.

He explained what ‘Love Jihad’ was. “There is nothing wrong in two people falling in love,” Tomar said. “Mukhtar Abbas Naqvi, Shahnawaz Hussain are married to Hindus. Shah Rukh Khan is married to Gauri. But if a Muslim is pretending to be Hindu in order to violate the woman and convert her to Islam, that is wrong.”

He even said that Hindus were partly to blame for Love Jihad because the practice of dowry had forced many Hindu women to throw their lot with Muslims. Muslims, he added, were doing a far better job of educating their girls than boys. And, both Christians and Muslims were better than Hindus when it came to rehabilitating women whom society was wrong to shame in the first place. “If there are things that they do better than we should adopt those practices. Hinduism is always changing and reforming. It is they who never change,” he said.

When I asked him if he was striking a somewhat muted note deliberately, he said, “Hindutva no longer has to be on the offense. But we will be reactive if Hinduism is under attack.”

Hindutva no longer has to be on the offense. But we will be reactive if Hinduism is under attack.

The schoolteacher spoke out against the lynching of Haryana dairy farmer Pehlu Khan by cow vigilantes. “These gau rakshaks are frauds,” he said. “They are in business with butchers who are competing with each other. Anyone indulging in this kind of fake gau raksha will be thrown out of the group.”

Tomar was raised on Hindutva, so to speak. He was five-years-old when his father began taking him to the local Rashtriya Swayamsevak Sangh (RSS) shakha. His mother went to jail for protesting the Emergency imposed by Indira Gandhi. Later, he joined Akhil Bharatiya Vidyarthi Parishad (ABVP) and the Bharatiya Janata Party’s youth wing. He joined Adityanath’s HYV in 2005.

For Tomar, who had been unsuccessfully trying to establish an HYV presence in western UP for over a decade, it was overwhelming to see hundreds of volunteers waiting to meet him for hours in the hot sun. At each stop, he would disappear into the crowd and emerge slightly disheveled, loaded with garlands.

By the time he was heading towards Bulandshahr, at least 30 cars bearing saffron flags were accompanying him on the road. Boys with saffron scarves around their necks whizzed by in motorcycles, clearing the road.

Tomar has a daunting task ahead of him. He has to ensure that the HYV, which was founded in 2002 by Adityanath, the Hindutva hardliner, doesn’t become a political liability for Adityanath, the chief minister in 2017. He knows that the CM will not stand that a group, even one that he founded, become a source of embarrassment to him.

And it isn’t just Tomar. Many HYV leaders at the Bulandshahr event expressly forbade the use of violence. An elderly speaker told the HYV foot-soldiers that it was their job to protect “Modi and Yogi.” “Josh mein hosh mat kho dena,” he warned. (Don’t lose your mind in all the excitement.)

At least some are heeding the advice. Asked what he believed were his duties, one young HYV foot soldier said that it was protecting cows, promoting nationalism and fighting social injustice. Asked if he would ever resort to violence in the line of duty, he echoed Tomar’s sentiment, saying that there was no need for vigilantism as the “government is on our side.”

Posing for a photograph for HuffPost India along with some other HYV members, he turned to his friend and asked him to remove his sunglasses. “Don’t you know that we are a serious organisation,” he said.

Tomar knows that the Hindutva agenda has to be stoked constantly but he is also aware that beating the same old ‘Love Jihad’ drum wasn’t going to sustain the growing organisation. To thrive and stay politically relevant, the HYV needs to give its members more. To this end, the organisation is gearing up for a massive undertaking to eliminate caste from the Hindu community so that, in Tomar’s words, all “Hindus see themselves only as Hindus.” “Nothing will make us more powerful,” he added.

In fact, building a caste-less society was the focus of several speeches on Sunday. In one surprising instance, a particularly aggressive speaker who began with bashing ‘Love Jihad’ ended up criticizing the caste system.

And then, the speaker began blaming the caste system for the inability of Hindus to stand up against Muslim aggression. When it was Tomar’s turn to speak, he said that for all their faults, Muslims could sit down and have a meal together without worrying about caste.

Hindus see themselves only as Hindus.

While the HYV is already organizing a gathering where people of different castes eat together, they are also thinking about launching a campaign that will ask people to drop their last names.

Alongside the attempt to portray the HYV as a social organisation and not a political one, Tomar also readily admits that the BJP will benefit from a Hindu consolidation in 2019 general election. “For too long now, other parties have divided us on the basis of caste and religion. But from now all Hindus, irrespective of caste, must be one,” he said.