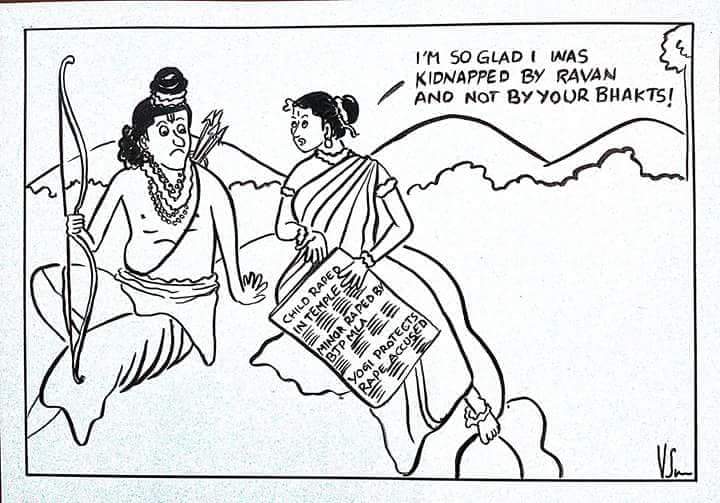 An FIR filed against journalist Swathi Vadlamudi for drawing a cartoon and Ahmad Shabbir of Times Now for sharing it on Twitter.

On Saturday, the Hindu Sangathan in Hyderabad filed a police complaint against the maker of the cartoon – journalist Swathi Vadlamudi, as well as another journalist who had earlier shared the cartoon, for “hurting the sentiments of Hindus”.

Meanwhile, Swathi, who shared her cartoon on Facebook on April 11, has been at the receiving end of plenty of online abuse. And the irony is that the people slamming the cartoon took the same abusive and misogynistic tones that the cartoon was pointing out.

“I have been making cartoons for a long time now and have made them on controversial issues earlier as well. But it never invited this kind of backlash,” a bewildered Swathi tells TNM.

Since this particular cartoon though, her social media, including WhatsApp, has been flooded with all kinds of abuse. “Most of it is extremely misogynistic and aimed at silencing me,” she observes.

One person for instance, insinuated that Swathi would meet the same fate as journalist Gauri Lankesh, who was shot dead outside her residence in Bengaluru in September, 2017. Another accused her of taking money from the Muslim community for writing anti-saffron posts and being part of the terrorist outfit ISIS.

She was even threatened with a Charlie Hebdo style attack – the French weekly magazine’s Paris office was attacked by two armed men in January 2015 after they published a satirical cartoon on Prophet Mohammed. The shooting killed 12 people and injured several others.

There were many, of course, who simply resorted to slut shaming her. 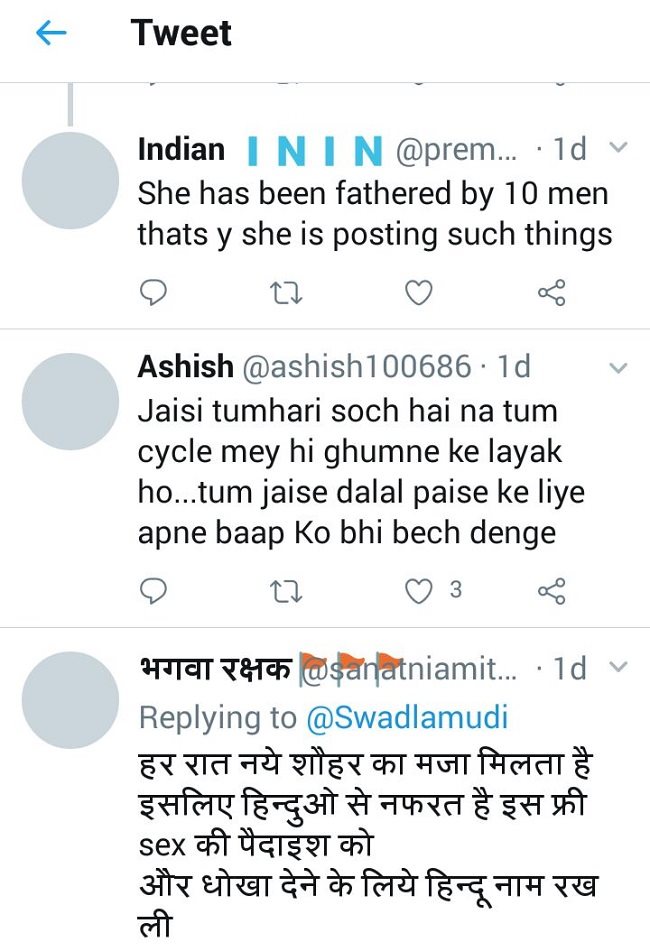 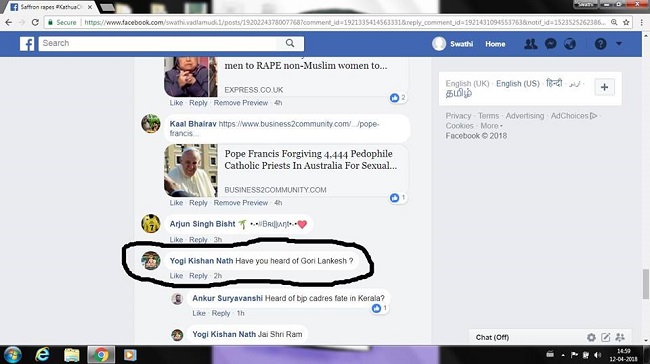 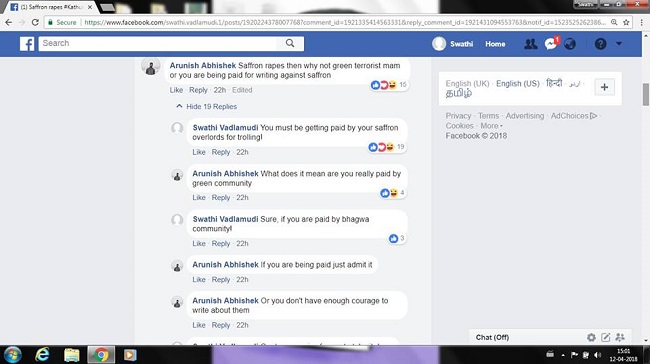 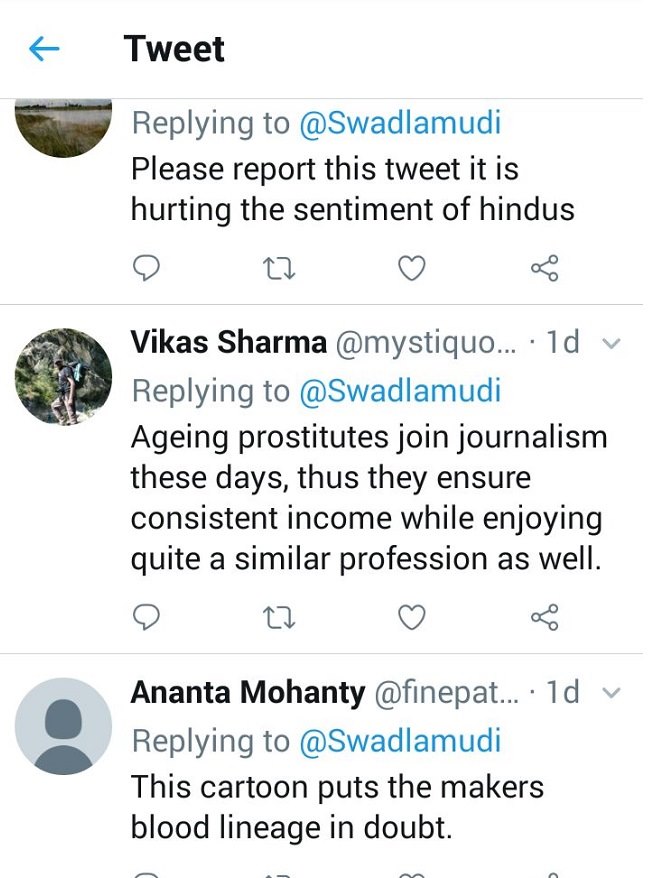 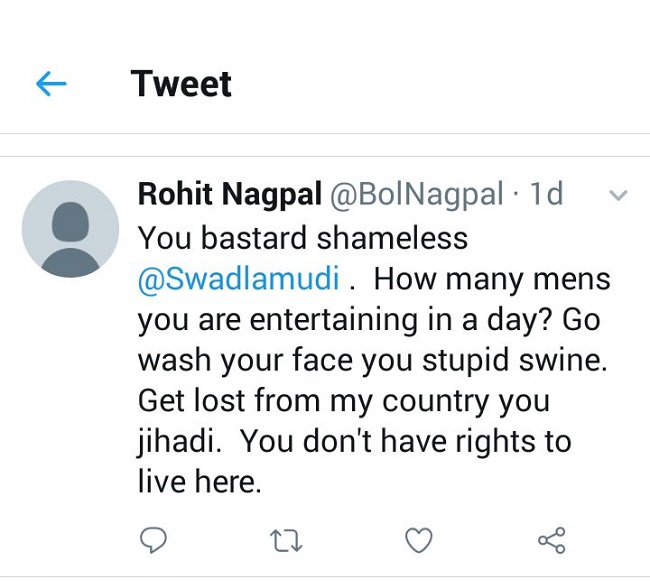 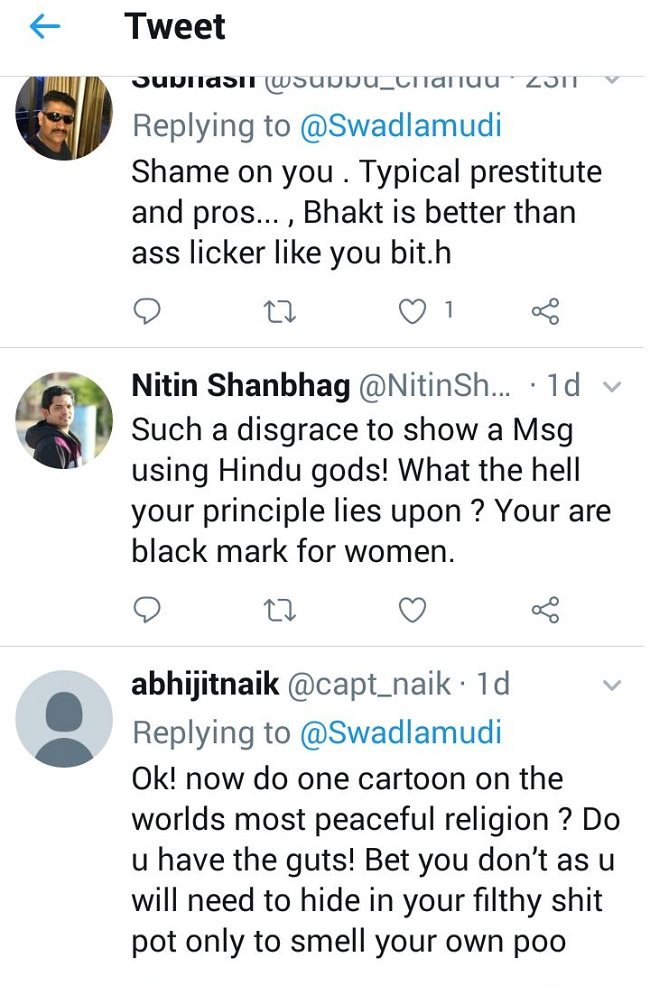 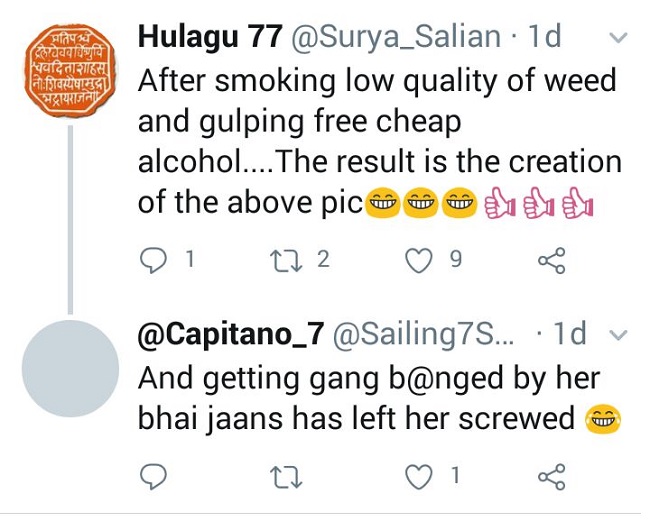 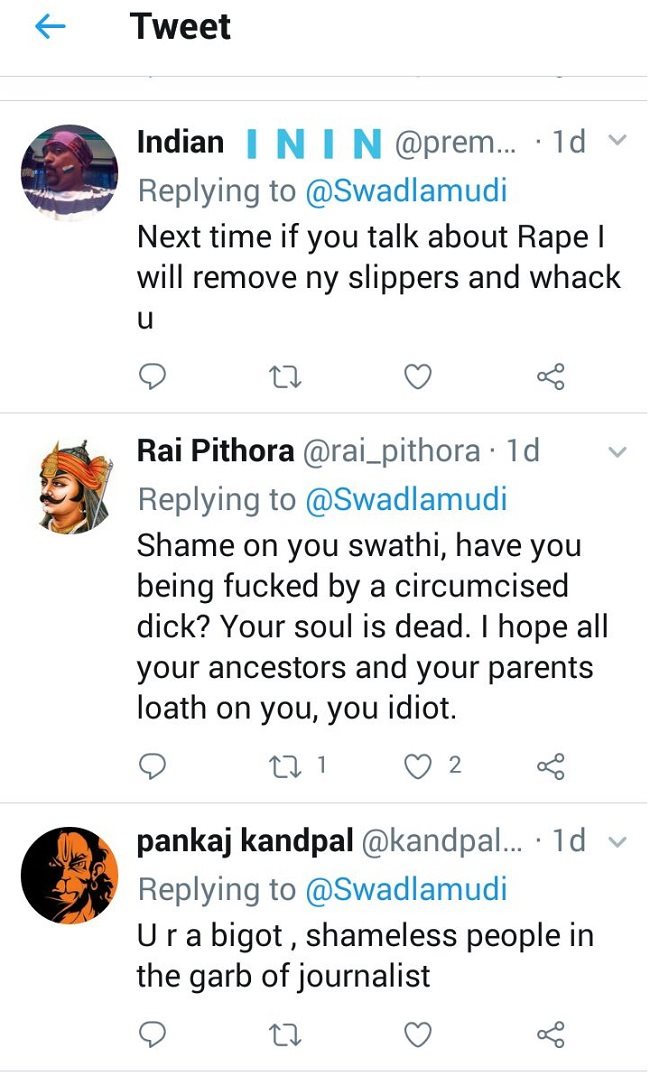 Following this too, Swathi’s Facebook inbox continued to be inundated with messages calling her a “coward” for not quietly taking the “backlash” for posting the cartoon.

Swathi admits that all of this, the death threats especially, have indeed frightened her. “I’m an earning member of my family. They are also worried about me,” she says.

However, she makes it clear that she won’t stop making cartoons. “I don’t think I’d be doing right by myself if I stopped. Besides, this is just reflective of the political climate in the country right now. And it’s at times like these that it’s most important to continue resisting,” Swathi says.

The Network of Women in the Media, India (NWMI), a forum for women media professionals across the country, strongly condemns the filing of an FIR against journalist and cartoonist Swathi Vadlamudi. The FIR, filed on 14 April at Saidabad police station in Hyderabad, under Section 295 (a) of the IPC (“deliberate and malicious acts, intended to outrage reli­gious feelings of any class by insulting its religion or reli­gious beliefs”), was filed by Hindu Sanghatan, an off-shoot group of Vishwa Hindu Parishad, an ultra-Hindu right group.

The cartoon in question, published on Swathi’s social media pages (Twitter and Facebook) on 10 and 11 April, depicts the mythical Hindu gods, Ram and Sita, on the issue of abduction and violence against women in India. The message in the cartoon does not in any way insult Sita or Ram; instead it poses a question to the public.

Besides the legal case, since 10 April Swathi has been on the receiving end of online abuse by Hindutva groups, where some users have threatened that she will meet the same fate as Gauri Lankesh and the murdered cartoonists of the Charlie Hebdo magazine in France. The Hindu Sanghatan has also slapped charges against Times Now Chennai Deputy Editor Shabbir Ahmed who merely shared her cartoon on his Twitter profile. Another cartoonist, Satish Acharya, is also being targeted with abuse and even death threats.

At a time when there is widespread outrage regarding violence against women in India, Swathi’s cartoons highlighted how unsafe India has become for women. The cartoon, which has so far been shared over 8000 times on Facebook, besides receiving several thousand ‘likes,’ has clearly touched a chord among the Indian public which in the recent past has seen abductions, brutal gang-rapes and murders of women and children in different parts of the country, from Kathua in Jammu and Kashmir to Unnao in Uttar Pradesh, Surat in Gujarat and elsewhere.

Cartoons are among the oldest forms of expression and have been an integral part of the news media all over the world. Cartoons hold a mirror to the current world in a particularly effective manner that goes beyond what is captured by words (spoken or written), photographs or videos. In a vibrant democracy such an art and the artists who create it should be encouraged to thrive instead of being stifled by hate groups.

Law enforcers must not yield to bullying tactics by majoritarian groups that endanger free speech in the country by taking their claims of “hurt religious sentiments” and “offence” at face value. They need to act to safeguard Constitutionally protected free expression and to adopt a zero tolerance approach to death threats.

The Editors’ Guild of India and Press Council of India must take suo moto notice of such legal and other attacks on media professionals, including and especially women (who are often targeted in particular, gender-related ways), and come out strongly in their support and defence.