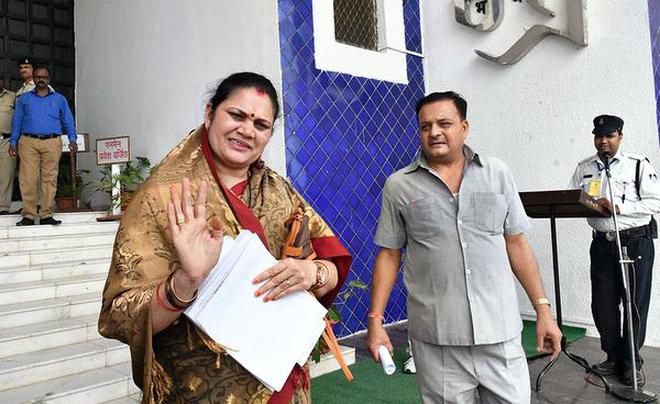 BJP MLA Neelam Abhay Mishra coming out of the Madhya Pradesh Assembly in Bhopal on Tuesday.

Weeps in the House; Home Minister assures security to her and family

A woman BJP MLA on Tuesday broke down in the Madhya Pradesh Assembly, claiming that she and her family members were being harassed by the police at the behest of a senior leader of her own party.

During zero hour, MLA Neelam Abhay Mishra stood up and said that the Rewa district police were trying to frame her and her family members in false cases, and sought security cover.

The Rewa Superintendent of Police was acting in a biased manner against her and her family at the behest of a powerful BJP leader, a tearful Ms. Mishra alleged.

The MLA, who represents the Simaria seat in Rewa district, also said that she would not contest the coming Assembly elections.

Opposition Congress members were prompt in supporting her, saying if a ruling party MLA was feeling helpless, one could imagine the plight of the common people.

The Minister announced that she and her family would be provided security.

However, Ms. Mishra was not consoled by the statement. She and her family were being hounded which should stop, and they should not be implicated in false cases, she demanded.

The Home Minister assured her that he will talk to the SP and ensure that no wrongful action was taken against anybody.

When the House reassembled, the women MLAs stayed put in the well. Almost all opposition MLAs trooped into the well, shouting “save women’s honour”.

However, women MLAs from the BJP came in support of the Shivraj Chouhan government. MLAs Ranjana Baghel and Mamta Meena reminded Leader of Opposition Ajay Singh of the recent complaint filed by his mother accusing him of ill-treatment.

The MLA, however, remained dissatisfied and stepped into the well of the House.

Congress members shouted “shame, shame” and “tyranny will not be tolerated”.