Women Delegates Write to Law Ministry on the Bill of the Muslim Women (Protection of Rights on Marriage) Act, 2017 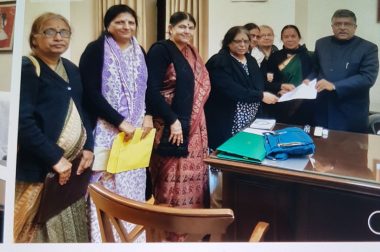 The Law Minister gave a patient hearing to the views expressed by the delegation and also explained the government’s stand point. He assured that the government would examine the questions raised in the memorandum seriously.

The Memorandum which had been endorsed by many women’s organisations and individuals was disseminated at a joint press meet held on February 8th, 2018 at 3 pm in the IWPC is attached. The press meet was addressed by Kirti Singh, Sudha Sundararaman, S Punyavathi, Shabnam Hashmi, Sheeba Aslam Fehmi and Maimoona Mollah.

Ministry of Law and Justice,

Sub: The Bill of the Muslim Women (Protection of Rights on Marriage) Act, 2017

We the undersigned women’s organisations and individuals wish to lodge our strong protest about the manner in which the government is seeking to push through the Muslim Women (Protection of Rights on Marriage) Act, 2017 in Parliament.

All of us have been involved with the campaign and struggle against Triple Talaq for several decades and welcomed the Supreme Court judgment setting aside this abhorrent practice.

We are, therefore extremely surprised that neither Muslim women (groups, organisations, concerned individuals, well-known social workers or as a whole), nor women’s organisations, nor others concerned with the issue were consulted before the present Bill was very hastily drafted.

We feel that the Bill is flawed for a number of reasons including the fact that it criminalizes Triple Talaq.

We further feel that there was no urgency in bringing forth such a Bill as the Supreme Court, by a majority, had already held that the practice of Triple Talaq was invalid and it was wrong for the government to cite the minority judgment, which is not binding, to bring forth the legislation.

The bill prescribes a punishment of up to three years imprisonment for the pronouncement of Triple Talaq and makes the crime cognizable and non-bailable. We feel that turning a civil wrong into a criminal offence is unjustified and legally flawed. In any case this draconian clause is totally unnecessary and the punishment is disproportionate to the crime alleged to have been committed. If along with the pronouncement of Triple Talaq, the wife has been subjected to any mental and physical cruelty or violence, she can approach the police under Section 498A of the Indian Penal Code. Ironically, this provision is being sought to be diluted in various ways with implicit and explicit government support. We strongly feel that Section 498 A needs strengthening and better implementation.

By making the offence cognizable and non-bailable, the government wants to permit anyone to file an FIR and hasn’t restricted this to the woman concerned or even her relatives. This means that anyone from the public can use the section, allege that the crime has been committed, and the police can arrest the husband even if the wife does not want to take action. Please note that the offences of “bigamy’”and “adultery” are both non-cognizable and bailable, even though bigamy is punishable with imprisonment for 7 years and adultery is punishable with imprisonment of up to 5 years. Further, for the offence of Bigamy punishable under Section 494 of the Indian Penal Code, only the first wife can lodge a complaint.

We also feel that this section will be counterproductive and will further aggravate the economic condition of the wife and children who will not be able to ask for a suitable maintenance if the husband is in jail and unable to work and earn. Additionally, the opportunity for reconciliation between the parties will be lost if an FIR is registered and the husband is placed under arrest.

The section allowing the wife to approach the magistrate’s court for a subsistence allowance is also flawed. Why should the wife and children be only allowed to ask for a subsistence allowance while the law of maintenance for women and children in the country clearly lays down that women and children should be given maintenance which will allow them to live in the same lifestyle that they were living in the marital home or ‘shared household’?

The Supreme Court in Shayara Bano’s case has only outlawed Triple Talaq or Talaq-e-Biddat. Thus, the other forms of Talaq which a husband can pronounce in the Ahsan and Hasan forms have not been invalidated and therefore still remain. The Supreme Court in Shamim Ara’s case had held that, for any Talaq to take place, two Arbitrator’s have to be appointed; one from the wife’s side and one from the husband’s side and they will try to bring about reconciliation and examine whether the talaq is for a reasonable cause. In the minority judgement in Shayara Bano’s case, the Supreme Court had quoted the laws from several South-East Asian and other Countries. Most of these laws laid down the procedure to be followed in cases of talaq and outlawed Triple talaq. Some of these laws also dealt with issues like maintenance, division of marital assets, and residence, which the wife and children require immediately while  the divorce is taking place. Some also stipulate that compensation should be paid for injuries and hurt suffered by the wife. Only in the law in Pakistan and in Bangladesh, a punishment of up to one year is prescribed for not following the procedure laid down under their respective statutes. Some of these laws also provide for Khula, and the Iraqi law exempts the wife from giving any ‘consideration’ for this. The best practices from some of these laws can be looked at if any legislation has to be made.

We reiterate that the present Act that is sought to be introduced by the Government with undue haste, is ill-conceived and flawed. In any case if the Government insists on pressing the Bill then it must be referred to the Standing Committee so that all those affected by the Bill can have an opportunity to argue their case. Any move to push through the Bill will not only be undemocratic but will be doing an injustice to those whom the Government claims will benefit from it.

Monsanto Protection Act Proves Corporations More Powerful Than US Government
We Were Raped and Tortured. We Refuse to Hide Our Faces. #Vaw
The signals emerging from a new dispensation
Dangerous little things- An account of turning political