Women have been prevented entry to the mosque’s mausoleum since 2011, with its trust saying close female proximity to the tomb of a revered saint is “a grievous sin” in Islam. 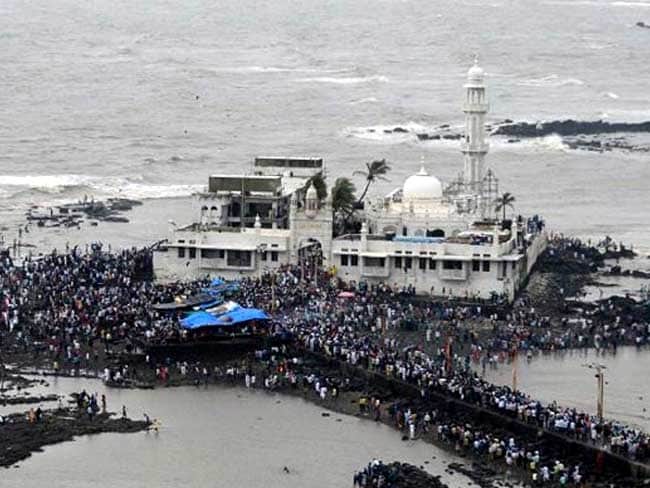 MUMBAI:  A landmark mosque in Mumbai is facing pressure to overturn a ban on women entering its inner sanctum, a move that could set a precedent on gender restrictions to places of worship in the country.

A Muslim women‘s rights group is locked in a bitter legal battle with trustees of Mumbai’s Haji Ali Dargah, built in the 15th century and popular not only with Muslims but Hindu devotees and sight-seeing tourists.

Women have been prevented entry to the mosque’s mausoleum since 2011, with its trust saying close female proximity to the tomb of a revered saint is “a grievous sin” in Islam.

Bharatiya Muslim Mahila Andolan (BMMA) has petitioned the Bombay High Court seeking a ruling that the ban is unconstitutional, hoping such a decision would mark a major step forward for women’s rights in the country.

“A positive ruling would set a precedent and would have a wider and long-term effect,” BMMA co-founder Noorjehan Niaz told AFP.

“It would send a message and encourage women of all religions who are barred from entering places of worship to approach courts with similar demands,” she added.

The mosque is located on an islet accessible via a causeway at low tide. It was built in the 1430s in memory of a wealthy Muslim who gave up his worldly possessions and went on a pilgrimage to Mecca.

Legend has it that Pir Haji Ali Shah Bukhari, who became a Sufi saint, died during his spiritual journey and his body washed up on rocks in the Arabian Sea off south Mumbai.

The mosque was constructed on the spot where his body was found, and his tomb, or “dargah”, lies in the inner sanctum – the mosque’s most sacred place.

It is one of a string of temples and mosques across country that restricts access to women.

Last month, local media reported that a temple in western Maharashtra, of which Mumbai is the capital, suspended seven security guards after a female devotee stepped on a platform to worship an idol.

Women are barred from the stand and temple authorities later performed a “purification” ceremony on the idol, according to the reports.

‘Women are impure’
Haji Ali Dargah is one of Mumbai’s most recognisable landmarks and receives tens of thousands of visitors every week.

But Ms Niaz said the trust started banning women from the mausoleum four years ago, although they are still allowed into the mosque’s other areas, where they can pray.

She said trustees cited menstruation as the reason for barring entry of women to sacred spots, an argument often given by conservative elements.

“They’ve said women are impure. But menstruation is a natural event and responsible for the entire of humanity being born. How can it be dirty? It’s a ridiculous and demeaning argument,” she told AFP.

She complained to the board and then approached Maharashtra state‘s minorities commission before launching legal action last year after making no progress.

“The shrine is symbolic for people of all castes, all religions and countries. It’s an iconic place and people travel from all over the world to visit it.”

“How can you bar somebody from entering the sanctum just because she is a woman? The decision was anti-women and anti-Islamic and we had no option but to go to court. It was the last resort,” Ms Niaz added.

A member of the trust declined to comment when contacted by AFP on the grounds that the matter was sub-judice, saying that he hoped Mumbai’s top court would settle the dispute when it holds its next hearing on December 15.

Maulana Mustaqeem Azmi, a member of the nonprofit All India Muslim Personal Law Board, said the rule was similar to those in other mosques.

“To insist that they be allowed into the tomb is against the religion,” he told AFP.

Human rights lawyers back the women, but are sceptical of whether their case will win. Instead, they are pushing for a law making it illegal for any trust to bar entry to a public place of worship on the grounds of gender.

“There are lots of temples where women are not allowed. If you go through each individual case, it will be an endless exercise so you have to have state intervention,” prominent rights lawyer Mihir Desai told AFP.

“Courts also like to restrain themselves from ruling on religious issues. Whether the court will deliver a verdict in favour of the women is very doubtful,” he added.