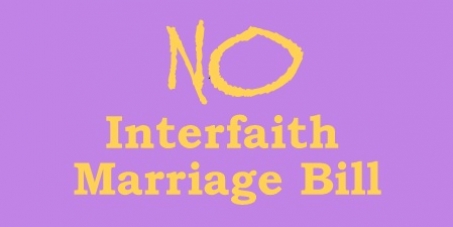 We call on the Government of Myanmar to urgently reconsider and halt the drafting of the Interfaith Marriage bill, known as the Law on Protection of Race and Religion, which is currently being drafted by a President-appointed Drafting Committee for consideration by the Parliament.

This bill will have a dire and catastrophic impact on women’s human rights, is likely to polarize and ignite further violence between religious communities in Burma/Myanmar, will cause grave damage to Burma/Myanmar’s international reputation, and threatens to derail the democratic reform process.

(1) The Religion Conversion Law forces a person to provide reason for conversion and undergo investigation from a registration committee to receive approval on what should be a personal, faith-based decision

(4) Monogamy law: this is an unnecessary law which will add to the large number of laws in Burma/Myanmar which restrict and regulate women’s sexuality, marriage and inheritance rights, and are in urgent need of reform to meet international human rights standards.

This bill violates basic international human rights standards and directly contravenes your Government’s commitment to the Convention to Eliminate All Forms of Discrimination against Women (CEDAW). It restricts women’s equality and freedom, discriminates against Myanmar Buddhist women in Burma/Myanmar, women of other faiths residing in Burma/Myanmar, and indigenous women, and is based on discriminatory beliefs that deny women the inherent rights of freedom of survival and freedom of choice. Drafting the Interfaith Marriage Law, at a time when the Government is submitting a report to the CEDAW committee in August 2014, would demonstrate the Government’s violation of both human rights and women’s rights and would be a disgraceful act inviting international ridicule.

This bill also promotes faith-based extremist nationalism which can destroy state peace and incite conflict, and contravenes Article 364 of the Constitution that forbids the abuse of religion for political purposes. The country’s transition to democracy is being watched and supported internationally, and drafting laws which do not meet democratic ideals can damage the image of Burma/Myanmar and dignity and hinder democracy building.

We therefore request that you:

· Immediately halt the drafting of the Interfaith Marriage bill.

· Work towards a law requiring the compulsory registration of all marriages regardless of race, religion and sex.

· Support the effective implementation of existing public laws which are useful; amend laws which discriminate against women; and approve and implement the anti-violence against women law currently being drafted to international standards.

India - Children are not safe in school: Here’s what we need to do
RSS calls for review of SC ruling on Sabarimala
The danger in precedents #deathpenalty
SC questions legality of National Board for Wildlife under Narendra Modi