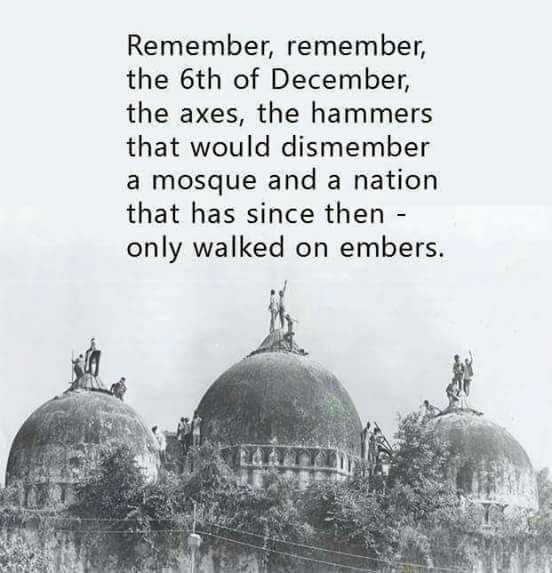 Not the loss of a mosque, but the disregard for Muslims causes anguish.Hasina Khan, Sana Contractor 26 Nov 2019

We, two Muslim women born and raised in Bombay, residents of Bhendi Bazaar, relived the pain and trauma of the 1992 riots on the day the Supreme Court ruled on the Ayodhya dispute. The judgment rekindled within us the memories of 6 December 1992, the day the Babri masjid was demolished, and what followed thereafter.

Etched in the landscape of our minds is the Bhendi Bazaar of the turbulent nineties that unfolded after the demolition. This area witnessed the worst police atrocities and the city’s most prolonged curfews. We did not just witness that theater of cruelty, but also got involved in rehabilitating members of the Muslim community who ended up in relief camps.

Cut to 2019 and we are witnesses again. Again we are seeing the Muslims rise to the occasion, striving to prove their loyalty to the country, offering proof of being good citizens. The manifestation of this desire of the Muslims is how they are working to maintain peace and acceptance of the Supreme Court’s verdict.

But we women, who are constantly battling to uphold constitutional rather than religious principles, we who have urged our communities to have faith in the Constitution of India and not Sharia law, are left wondering by this judgment. Having witnessed the bloodstained journey that has brought India from Jai Siya Ram to Jai Shri Ram, we are wondering where we stand today in our fight for constitutional values.

The demolition of Babri, the ensuing riots in Bombay city and the 13 bomb blasts marked a turning point in how we saw ourselves—as Indians, as Muslims, and most importantly, as women. We saw the façade of cosmopolitanism that elite Bombayites like to romanticise torn down. We saw the landscape of Mumbai change, as Muslims migrated from one part of the city to another en masse to gain a sense of security. Ghettoisation deepened and the two communities were further alienated from each other. Muslims lost lives and property, but most of all, their faith in the state has steadily dissipated ever since.

It is against this background—beyond the “dispassionate prism of the law”—that the proposal from the All India Muslim Personal Law Board (AIMPLB) to seek a review of the Ayodhya judgment needs to be understood. Irrespective of whether their petition is admitted or not, given that the AIMPLB is not a party in the Ayodhya case, one thing is clear: this matter is far from at rest.

When the court ruled in favour of building a temple at the site of the demolished masjid, everyone from Prime Minister Narendra Modi to the Home Minister Amit Shah to the Opposition parties and even the petitioners in the Ayodhya case said that a “peaceful” solution to an issue that had caused bitter strife between the Hindus and Muslims of India has been found. We were told that everyone must respect the ruling and move on.

Curiously, the BJP leaders did not want the same “respect” accorded to the Supreme Court’s Sabarimala ruling. In the Sabarimala case, the BJP has already rationalised the violence as a ‘matter of faith’. Of course, the judgment in the Ayodhya case is in their favour, and so its standards for evaluating the impact of both rulings does not appear to be the same.

Nevertheless, these exhortations for tranquility ignore the role that the Babri masjid’s demolition played in the Hindu-Muslim polarisation in the country. Along with that polarisation came the political ascendancy of the BJP. It is this journey—which began with BJP leader LK Advani’s infamous rath yatra in 1989—which has culminated in redefining the body politic of our nation in 2019. It took this long for muscular Hindutva to completely efface Sita, whose husband is the Hindu god Lord Rama, from the mental map of Hindu divinity. It took this long also to turn Lord Rama into the symbol of a Talibanised form of Hindutva.

Yes, the violence that we saw in 1992-93 had incited shock, anger, fear and hurt. The same emotions are resurfacing now, but this time they are emerging in a time of “peace”. Over these three-odd decades, the very nature of communal violence changed. There were large-scale riots during the 1980s and 1990s, but now an all-pervasive atmosphere of fear engulfs Muslims, especially the most marginalised among them. This fear unfolds as violence in the name of beef on one day, or their refusal to chant ‘Jai Shri Ram’ the next day.

This is the background against which we are being told that the Supreme Court’s decision has brought to an end a bitter battle between two communities. In fact, the ruling has sent the message to minorities that they can never expect justice from a secular institution. Then what is the value of these pronouncements of peace and exhortations to “move on”? Only those making these claims can answer this question.

What would have been most just was rebuilding the mosque that was demolished. But it would be naïve for Muslims in present-day India to think that the mosque would be restored. The Allahabad High Court’s ruling to divide the land between the claimants had seemed like a compromise. Now, handing over the land where the mosque once stood to the perpetrators who broke it seems like a cruel joke.

True, the Supreme Court has acknowledged that the demolition of the mosque was illegal. This remark is somehow supposed to make the judgment “fair”. But what we see before our eyes is a party that had two seats in Parliament in the 1980s rise, with the temple agenda, to assume two thumping majorities in 2014 and 2019. Following the Bombay riots, the Shiv Sena came to power too, openly asserting its majoritarian ideology in Mumbai and alienating many who had built this city.

What we also see is that those charged with involvement in the bomb blasts of 1993 were given the most severe of punishments, even the death penalty. But those who brought down a historical monument in broad daylight have faced no consequences. On the contrary, they have now been rewarded. Mere suspicion is enough to get Muslim men imprisoned, for decades together, without evidence of their having committed any crime. But if the alleged perpetrators are Hindus then it seems that all the evidence in the world cannot implicate them.

As feminists, we find ourselves at an odd position. Our anguish is not at the loss of a place of religious worship, but at the sheer blatant disregard for any sense of justice towards the Muslims as a community. What we see is a show of majoritarian strength and the loss of dignity for ordinary Muslims. The game of religion is played by men, and women are made the pawns in it. Majoritarian politics has played on masculinities, painting the Muslim as the “foreigner”, the infiltrator, the ghuspetia, a collective against Shri Ram (and not Siya Ram).

Muslim women have to face the dual brunt of this Othering of their community. With issues such as instant triple talaq, the Hindu Right has co-opted the agenda of Muslim women’s groups and is going to great lengths to allegedly offer them protection. But, somehow, the same Right is not interested in the lives of Muslims when they become victims of communal violence. Nor do they even attempt to contribute to their economic well-being by, say, implementing the recommendations of the Sachar Committee report.

Hence, the decision to file a review petition does not signal closure of the mandir-masjid debate. If anything, the issue seems to be alive and well. It will be used by bodies such as the AIMPLB to mire the Muslim community in fear and insecurity and it simultaneously portends huge political gains for the Hindu right. Mandir wahin banega (we will build the temple in Ayodhya) has been the BJP’s long-standing election agenda. It has followed through on its promise. Even as it fails at delivering on anything on its “development agenda”, this issue will remain a feather in its cap, firmly securing its position as the ruling party.

The court has ordered the state to set up a trust and use public money to build a temple, but not a mosque. What does this bode for the future of secular India? Now that the BJP seems to have established itself as the savior of Hindus and Hinduism, what more can we expect in the coming years as women?

The authors are feminist activists with the Bebaak Collective. The views are personal.

In Yogi’s Gorakhpur, Police remain callously inactive even 12 days after my sister’s murder
51 children including from Manipur-Nagaland rescued from Jaipur
Jaipur- Statement condemning the custodial torture of 21 Christians
Half is Us, Half is Ours: Watch a New PSA for Gender Parity in Elections