Women vs sexism, one verse at a time – Slam poets with feminist punch #SundayReading 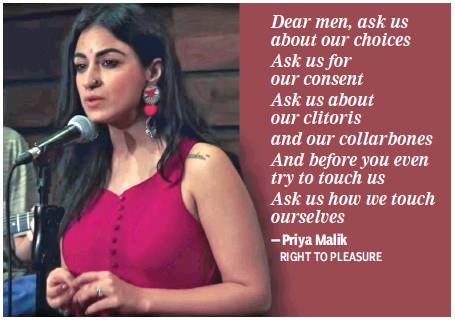 When 19-year-old Aranya Johar wrote and performed her poem, ‘A Brown Girl’s Guide to Gender’ on Women’s Day, she wasn’t expecting it to go viral. Written in half an hour before her board exams, it started on a personal note: Johar recalling the misogyny of a boy telling her that men didn’t want to hear about “vaginas bleeding”. Yet, its focus on everyday sexual objectification, violence against women and male privilege struck a chord with many across the world.

Since then, the original video of the performance has been viewed over 4.8 million times on YouTube and Facebook. Johar is part of a new generation of female poets who are using spoken word poetry to start conversations about gender disparity and sexism. They are helped by social media platforms like Instagram, You-Tube and Facebook, which amplify their voices and reach, as well as local groups such as UnErase Poetry, Kommune India, Airplane Poetry Movement and Delhi Poetry Slam. “We are forcing people to include us in a conversation that’s been avoided for far too long,” says Johar, who’s been performing in Mumbai since she was 11.

Even before online fame, spoken word poetry has been seeing a gradual but steady rise in female voices over the last four years. “It is mostly because this setting — the performer fearlessly on stage, and an active audience listening — has just one rule: no judgement,” says Mumbai-based Nandini Varma, founder of Airplane Poetry Movement.

The trend in spoken word poetry is also a reflection of the cultural moment we live in, where conversations around everyday sexism are finally a part of the mainstream. Freddie Storm, creative director at Delhi Poetry Slam, says she’s noticed many women poets writing about patriarchal constructs of society, and ways to overcome it. “It inspires other women who have had similar experiences in life to come out and speak openly in a non-judgmental and safe environment,” she feels.

This also encourages poets who are starting out, says 21-year-old Diksha Bijlani from Delhi, who won India’s first collegiate competition, National Youth Poetry Slam, in 2016. “I started with much lighter poems but having a safe space to be heard helped me overcome the apprehension of not being supported, and call out personal problems like my family policing what I wore,” she says.

Delhi Poetry Slam sees participation from homemakers who use the stage to talk about their isolation, and college students who perform poems on feminism because they are taking classes on gender studies. “Recently, a girl spoke about being raped as a child by her uncle and after her performance, many women in the audience recounted similar experiences. It was horrific but real,” says Storm. She adds that spoken word poetry is increasingly being used for other kinds of activism, including addressing religious and class bias and caste issues.

These raw and honest poems talk about everything from menstruation stigmas and being reminded that you’re of “marriageable age” to suffering from depression and the concept of consent. “The best part of the poetry scene in India is that women don’t feel the need to create their own exclusive space,” says actor and anchor Priya Malik, a familiar face on Mumbai’s poetry circuit. “We’re a bunch of artists who support and encourage one another regardless of gender.” Performed in September, Malik’s viral free verse poem Right to Pleasure — on consent, choice and pleasure is addressed to both men and women. “Being a woman is like being at war your entire life, regardless of where you’re born or which social strata you belong to,” Malik says. “Right to Pleasure sprang from that war zone.”

Spoken word poetry can often make feminism more accessible with its immediacy helping the poet establish an emotional connection with the audience. “Women poets are adapting poetry to seek a voice that talks about issues pertinent to women,” Malik says. “I believe that words can shift dynamics and ultimately lead to societal change.”

Ironically, the reactions to Johar’s ‘A Brown Girl’s Guide to Gender’ only validated the point that it was making. “I got a lot of death threats and rape threats after the poem went viral. Even recently, there were memes that slut-shamed me,” Johar says. “Yet, I feel like this doesn’t matter because so many women shared it and talked about how they were assaulted and wrote to me with their stories,” adds Johar, all set to take on more taboos.

Dear men, ask us about our choices Ask us for our consent Ask us about our clitoris and our collarbones And before you even try to touch us Ask us how we touch ourselves

Not just me, my mother, sisters, friends, all quicken their pace post 8.30 in the evening. My mom telling me to wear skirts out less often. Nirbhaya and more, left forgotten. We don’t want to be another of India’s daughters, do we? So I wear my jeans long and wear my tops high. Don’t show my cleavage or a hint of my thighs. Don’t want to be mistaken for wanting it. Cause if I wear less, I’m more than just flaunting it, I’m risking it. Risking not my virginity, but my life.