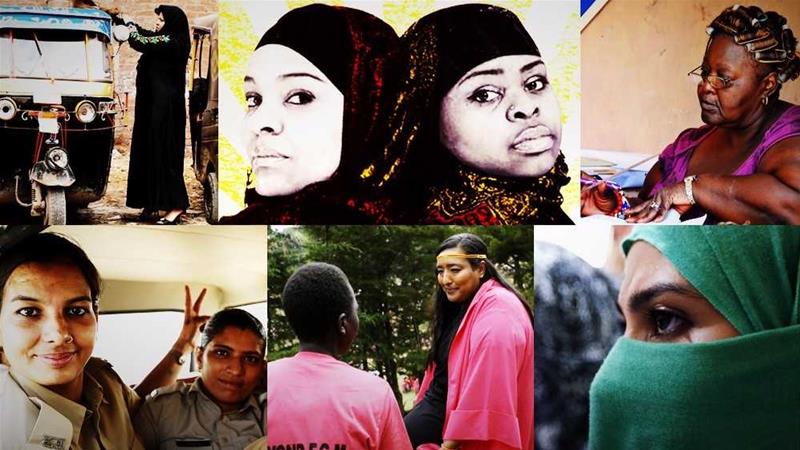 To mark International Women’s Day, we’ve compiled a list of our must-see documentaries featuring brave and determined women from all around the world.

From journalists risking life and limb to report the news in Pakistan to the Cuban woman challenging tradition and reshaping rumba in one of her city’s poorest areas, these are eight stories you cannot miss.

Muneera and Sukina are Poetic Pilgrimage, Britain’s first female Muslim hip-hop duo. This is their personal, spiritual, and physical journey.

As a tour of the UK takes the women into diverse communities, they remain undeterred by the fact that some Muslims consider music and public performances by women to be forbidden.

Instead, their music guides them to new discoveries about their faith, as they learn that they share their journey with other Muslim women around the world, and explore their desire to reconcile their conversion to Islam with their strong feminist sensibilities and Jamaican roots.

It’s a universal story about friendship, love and idealism, and about two young women finding their place in the world.

Behind the Wheel: Egypt’s Women Drivers

Very few female taxi drivers brave the unforgiving traffic of Egypt’s bustling capital, Cairo. But Um Waleed is one of them.

Driven by force of circumstance and the need to make a living, she has been picking up passengers for more than 30 years after being encouraged to buy a taxi by her father.

Her story, along with those of other Egyptian women who spend their days behind the wheels of everything from a rickshaw to a 36-tonne truck, are the focus of this film.

Long hours and the discrimination these women face their male-dominated professions only serve to increase their determination to reconcile their working lives with their identities as women in the Arab world.

This award-winning film follows women working in one of the most dangerous and conservative areas of Pakistan.

“Where I come from, women are not usually allowed to get an education,” says Khalida Niaz, who went on a hunger strike to convince her father to let her finish school.

Now, she is a radio newsreader for the Tribal News Network, which broadcasts across Pakistan’s troubled border region with Afghanistan.

Reporting the news there can be deadly – threats by armed groups have shut down most media outlets. But Khalida and her colleagues know there are some stories that only women can tell.

A community worker in the heart of Matanzas’ poorest yet most culturally-vibrant neighbourhood, La Marina, Regla Gonzalez Miro is pushing the boundaries around rumba culture.

The Cuban city is considered the birthplace of rumba music and dance, and those who live there are bound by a strong sense of community and history.

Traditionally, women are not allowed to play the drums in rumba, but Gonzalez, together with her friend Regla Mesa Milanes, is determined to change this. They created the Female Rumba Association three years ago and hold drum classes there for girls and boys.

Through Gonzalez’s story, we gain an insight into this vibrant place and its culture, to which Gonzalez’s past and present – as the daughter of an avid rumba dancer – are tied.

The practice is prevalent in Africa, the Middle East and Asia but happens all over the world, despite it being illegal in most countries.

Despite having no health benefits or being linked to any particular religious faith, FGM is considered an essential part of raising a girl and preparing her for womanhood by millions globally.

In this film, journalist Fatma Naib, whose family are from Eritrea where FGM is common, but who grew up in Sweden, where the practice is illegal, takes a personal journey – from Somaliland to Sweden – to explore the traditions and controversies that surround FGM.

Amid a spate of attacks, Afghanistan struggles with a resurgent Taliban, backed by the Islamic State of Iraq and the Levant (ISIL, also known as ISIS).

In the country’s most northerly provinces, ISIL are believed to be attempting to expand their influence into Central Asia and Russia, causing Afghan authorities to encourage the general populace in those areas to join local militias and provide help and support to security forces.

But in such a conservative country, few would have expected that the most enthusiastic recruits would be women.

Yet in Jowjan Province, which sits on the border between Afghanistan and Turkmenistan, several hundred women have decided to take up arms against the fighters. Afghan filmmaker Najibullah Quraishi gains unique access to a group of female recruits to find out why they decided to fight, and what it means for their families, their communities and the country at large.

Following the Dehli rape case in 2012, hundreds of women’s police stations have been set up across India to combat domestic abuse and sexual violence.

Every day, the staff at the women’s police station in Sonipat, in the northern state of Haryana, deal with the cases brought to them by the public.

Some days it’s investigating crimes or managing public order, but much of the women’s time is spent mediating family disputes, in which they act as a counsellor or social worker.

The women encounter families at war over controversial issues such as caste, dowry payments and relations with abusive in-laws. Their stories reveal how women’s lives are changing in India and how they struggle with the conflicting demands made of them.

The Lives of Black Women

Rekia Boyd was only 22 when she was killed by an off-duty police officer. Dante Servin fired five shorts, one of which struck Boyd in the head. She was unarmed.

In the United States, black women are being killed at a rate of one a month, and yet their stories often go untold.

“They don’t talk about women that much when they get killed by the police,” said Martinez Sutton, Boyd’s brother. “They barely talk about women. Why is that? It’s crazy because you see that even in death women play the second role.”

This film investigates the lesser-known stories of black women who have fallen victim to police violence in the US and asks why they are left out of the conversation on police brutality.