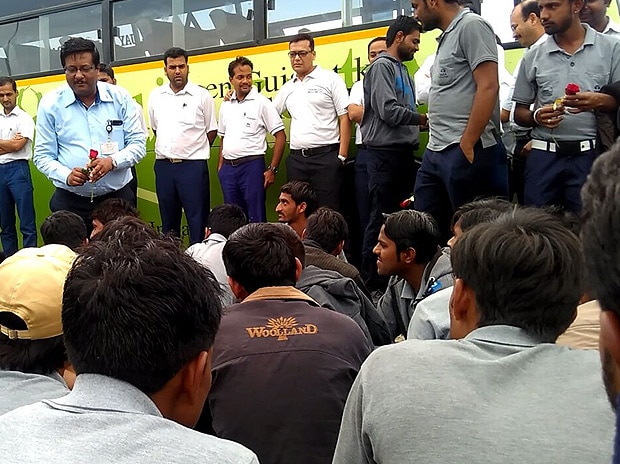 A Tata Motors official offers a rose to workers at the company‘s plant in Sanand, Gujarat, on February 2, 2016. The workers are protesting the suspension of their 28 colleagues.

BS Reporter | Ahmedabad Mar 18, 2016 12:27 AM IST
Workers-union-gets-recognition-at-Tatas-Sanand-unit
A Tata Motors official offers a rose to workers at the company’s plant in Sanand, Gujarat, on February 2, 2016. The workers are protesting the suspension of their 28 colleagues.
The state administration, in an initial step to address the strike at Tata Motors’ factory at Sanand near here, has given official recognition to the workers union leading the stir.

Till now, there was no officially recognised union at the plant. The state labour department, mediating between management and stir leaders, formally registered the union, named Bharatiya Kamdar Ekta Sangh, Sanand, on Thursday. It has around 450 members. Hitesh Rabari, a permanent worker, is president and Umesh Rathod, another worker, is secretary.
Advertisement
Rabari said he was happy at the labour department recognition but added the strike would continue if the company did not reinstate 28 workers who had been suspended on disciplinary charges, trigger for the strike. “We are open to an enquiry. But, we want the company to take back the suspended workers during the enquiry,” he said.

A meeting is scheduled at the labour commissioner’s office on Friday. M S Patel, assistant commissioner, said he hoped the deadlock would be resolved at the meet.

Other trade unions and some other bodies plan to stage a protest rally on Sunday, in support of the workers, at the Sanand industrial estate on Saturday.

Rabari said if a satisfactory compromise was reached on Friday, they would immediately call off the protest.

A company spokesperson said, “We have always maintained we respect the right of the workers to form a union. We believe it will help both parties engage and resolve matters amicably. But, we have not received any communication about the registration of a union for our Sanand plant.”

The company added, “We welcome the initiative..to mediate between the workmen representatives and management. We look forward to open and mutually beneficial discussion in this meeting and hope the workmen representatives will join this meeting with heightened responsibility towards all workmen and resume duty at the earliest.”http://wap.business-standard.com/article/companies/tata-motors-sanand-strike-workers-union-recognised-116031701084_1.html