Do you know when the iconic red ribbon that represents fighting HIV/AIDS was conceptualised? Find out all about HIV/AIDS this World AIDS Day 2018. 1 in 4 people don’t know they have HIV/AIDS. Know your risks=know your status. (World AIDS Day 2018 via WHO)

Today, that is December 1 2018, World Health Organisation (WHO) joins global partners and citizens to commemorate AIDS Day under the theme ‘Know Your Status’.

This is also an occasion to celebrate the 30th anniversary of World AIDS Day — a pioneering global health campaign first initiated by WHO in 1988.

It is estimated that currently only 75 per cent of people with HIV know their status.

WHO advocacy and communication for World AIDS Day 2018 with the theme ‘Know Your Status’ aims to achieve the following objectives:

“HIV does not make people dangerous to know, so you can shake their hands and give them a hug: Heaven knows they need it” -Princess Diana

One in four people with HIV don’t know they have it; know your risks= know your status

Prevention is better than cure; especially when something has no cure

The risk is not knowing; stop AIDS

Safe sex or no sex; it’s your life that’s at stake

Are few minutes of unprotected thrills, worth a lifetime of pills?

At the beginning of the 1980s, before HIV had been identified as the cause of AIDS, the infection was thought to only affect specific groups, such as gay men in developed countries and people who inject drugs.

The HIV virus was first isolated by Dr Francoise Barre-Sinoussi and Dr Luc Montagnier in 1983 at the Institut Pasteur.

In November that year, WHO held the first meeting to assess the global AIDS situation and initiated international surveillance.

With increasing awareness that AIDS was emerging as a global public health threat, the first International AIDS Conference was held in Atlanta in 1985. 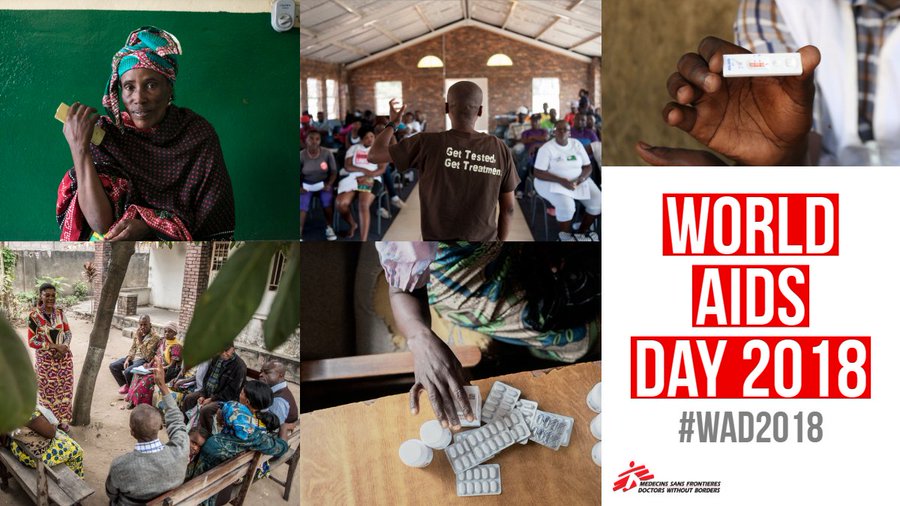 MSF is gearing up for World Aids Day on 1 December. Our #HIV projects across the world are hosting events to highlight MSF’s work with people living with HIV. Follow us to find out how MSF is reflecting on the fight against HIV/AIDS #WAD2018 #WorldAidsDay

In 1988, two WHO communications officers, Thomas Netter and James Bunn, put forward the idea of holding an annual World AIDS Day, with the aim of increasing HIV awareness, mobilising communities and advocating for action worldwide.

It wasn’t until 1991 that the HIV movement was branded with the iconic red ribbon. This was the very first disease-awareness ribbon, a concept that would later be adopted by many other health causes.

Clinical trials of antiretrovirals (ARVs) began in 1985 — the same year that the first HIV test was approved — and the first ARV was approved for use in 1987.

By 1995, ARVs were being prescribed in various combinations.

Generic manufacturing of ARVs would only start in 2001 providing bulk, low-cost access to ARVs for highly affected countries, particularly in sub-Saharan Africa, where by 2000, HIV had become the leading cause of death.

Also read | Parliament passes the HIV/AIDS Bill: All you need to know

1. HIV continues to be a major global public health issue, having claimed more than 35 million lives so far.

4. The WHO African Region is the most affected region, with 25.7 million people living with HIV in 2017.

5. The African region also accounts for over two thirds of the global total of new HIV infections.

6. Key populations often have legal and social issues related to their behaviours that increase vulnerability to HIV and reduce access to testing and treatment programmes.

Every week, around 7000 young women aged 15–24 years become infected with HIV. In sub-Saharan Africa, three in four new infections are among girls who are twice as likely to be living with HIV than men.

On World AIDS Day 2018, UNAIDS is focusing on HIV testing. Testing for HIV allows you to seek HIV treatment if you are HIV-positive or to protect yourself if you are HIV-negative. Knowing your HIV status gives you the power to take control of your health and well-being.

HIV treatment, care, and support provide the means to scale up prevention of vertical transmission to the next generation, cut new infection rates and save the lives of mothers. HIV testing is usually the entry point for HIV prevention or treatment. Early detection of the HIV status of women will provide an opportunity to start antiretroviral drug treatment.

Due to the high risk of acquiring HIV during pregnancy, all pregnant women not living with HIV should be retested in the third trimester, during labour and/or during the postpartum period. Early treatment enables pregnant women to receive prompt antiretroviral treatment (ART) for themselves and early antiretroviral (ARV) prophylaxis to reduce the risk of transmission of HIV to their babies during pregnancy, birth, and breastfeeding.

The risk of vertical transmission is particularly high if a woman acquires a new HIV infection, leading to high viral levels in her blood or milk while she is pregnant or breastfeeding. It is strongly recommended that all HIV-exposed infants have virological testing at 4-6 weeks or at the earliest opportunity thereafter. Early Infant Diagnosis (EID) of HIV infection is critical to ensure optimal treatment outcomes for children.

Infant mortality in the first year is very high in untreated HIV-infected infants. HIV-exposed infants should get early HIV testing with prompt return of results, rapid initiation of treatment and receive continued breastfeeding in order to improve survival. Breastfeeding also protects against other frequent causes of preventable child mortality such as pneumonia, diarrhoeal diseases, and undernutrition.

Even when ARVs are not available, breastfeeding may still provide infants born to HIV-infected mothers with a greater chance of HIV-free survival. Mothers should be counselled to exclusively breastfeed in the first six months of life and continue breastfeeding thereafter unless environmental and social circumstances are safe for and supportive of replacement feeding.

The World Alliance of Breastfeeding Action (WABA) has published the second edition of the HIV Kit – Understanding International Policy on HIV and Breastfeeding. This comprehensive resource seeks to inform about the concepts and recommendations for dealing with infant feeding and HIV-free survival. The Kit was developed in close cooperation with international reviewers, and endorsed by the Academy of Breastfeeding Medicine. The complete Kit is now available online.

World AIDS Day 2018 reminds us to make HIV testing a priority. Early testing/detection of HIV will enable people to make informed decisions about breastfeeding in the context of HIV to ensure HIV-free survival.

Fact sheet – Latest statistics on the status of the AIDS epidemic, UNAIDS July 2018

No Aadhaar Card , No treatment for patients #UID #WTFnews
Stan Swamy’s relatives have right to clear his name: Lawyer to Bombay High Court
NHRC asks #Chhattisgarh Govt to provide doctors for inmates in Prison
Women Deliver unaware of charges against Kurien, is that Enough ? #Vaw #Rape