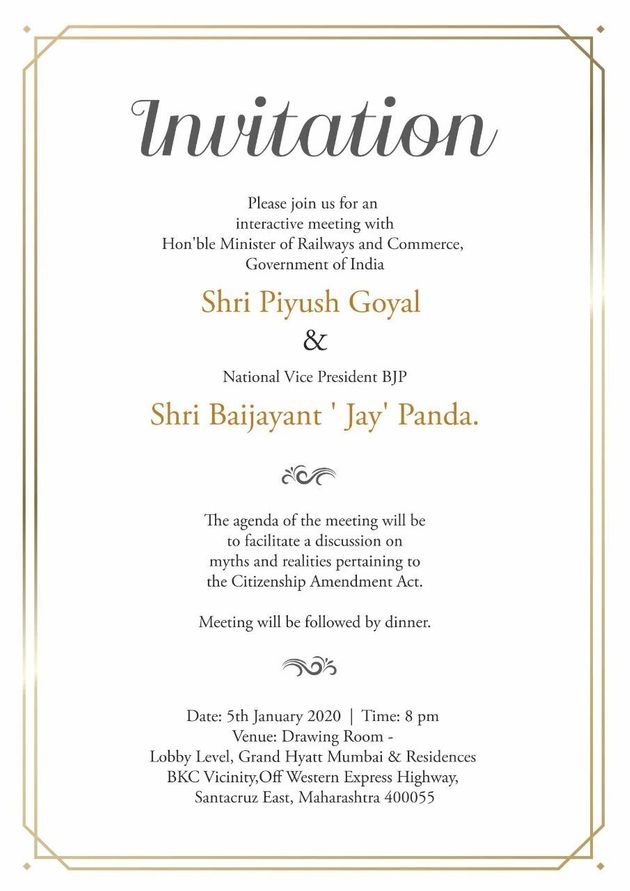 MUMBAI, Maharashtra — The Modi government has invited Bollywood’s top stars and filmmakers to a Mumbai hotel for a meeting with Piyush Goyal, the Union Minister of Railways Commerce and Industry and BJP’s National Vice President, Baijayant Panda to discuss the ‘myths and realities’ of the controversial Citizenship Amendment Act.

The invitees include household names such as Karan Johar, Farhan Akhtar, Kabir Khan, Siddharth Roy Kapur, Ritesh Sidhwani, besides several others. These stars have been asked to gather people and show up for the meeting at Mumbai’s Grand Hyatt Hotel on Sunday Jan 5.

It isn’t clear if everyone invited will attend.

“They are trying to get as many big names as possible,” said a source on the condition of anonymity.

Another top name, who has been invited, said that they aren’t going to attend. “Not a fan of selfies,” the person said, confirming that an invite had come from Mahavir Jain. Farhan Akhtar said he won’t be able to make it while another top star said he was ‘out of country.’

The meeting, organised by film producer Mahavir Jain, is part of the ruling Bharatiya Janata Party (BJP)’s attempt to blunt the widespread opposition to the act — both in India and abroad. Jain, widely seen as Modi’s man in Bollywood, was also behind Modi’s infamous “Bollywood Selfie”. The selfie was orchestrated just before the general elections last year, and was aggressively publicised by the BJP.

“Mahavir Jain has been asking the so-called secular Bollywood voices for ‘genuine views’ so that he can take it to the powers that be,” a source told HuffPost India.

“The idea behind the meeting is quite inclusive in approach and we request a participation of all the rational thoughts and different points of views pertaining to the Citizenship Amendment Act,” according to a invitation message Whatsapped to several Bollywood stars, and reviewed by HuffPost India. “We strongly believe in a healthy discussion around all the possible dimensions of the issue. Your inputs will enlighten the discussion. It will be followed by a scrumptious dinner. Please come over . See you. 😊”

Here’s a picture of the invite that has gone out, accessed by HuffPost India

While Bollywood has largely kowtowed to the Modi government since 2014, a small but vocal section of actors, filmmakers and producers have broken their silence over the new citizenship act that, critics contend, makes citizenship contingent on religion and violates India’s self-avowedly secular constitution. This new effort to reach out to Bollywood suggests the government was caught unawares by the ferocity of the opposition.

Varun Grover’s poem, ‘Hum Kaagaz Nahi Dikhayenge’has become a symbol of the collective resistance against CAA while millions of students have hit the streets with slogans of their own, often risking detention and arrests.

“I think the govt. didn’t expect this level of credible organic resistance and such international media scrutiny on the CAA-NRC- NPR protests and the govt. crackdown on peaceful protesters,” said actor Swara Bhasker, who has been unequivocal in her opposition to the CAA, and has spoken up against the Modi government’s excesses in the past.

“I think this, along with the missed call campaign controversy and morphed Bollywood poster Whatsapps, is all part of an info war sort of game plan to make it seem like the support for CAA-NRC-NPR is genuine when it seems like most of India doesn’t want these laws- or doesn’t care – but certainly there is no overwhelming support for it,” Bhasker said.

While the invitation says that the meeting encourages ‘different points of views pertaining to the CAA’ and has an ‘inclusive approach’ none of those who’ve vocally criticised the Act have been invited.

Swara Bhasker, Varun Grover, Vikramaditya Motwane, Anubhav Sinha, Neeraj Ghaywan, Anurag Kashyap — all of whom have been critical of the CAA on their social media profile — have not been called for the discussion with Goyal.

“I don’t know about this meeting and I haven’t been invited. I don’t know who all have been invited or who has been left out but I do feel this is a government that has over the last few years used the soft power of Bollywood very effectively in their ideological agenda and messaging.” Bhasker said.

If this meeting actually has been planned, Bhasker said, “This is yet again an attempt to use Bollywood and Bollywood stars and their popularity and credibility to legitimise the much maligned and unpopular CAA-NPR-NRC laws.”

HuffPost India reached out to Jain who declined calls and hasn’t responded to text messages.

This story has been updated to reflect that BJP’s National Vice President, Baijayant Panda will also be a part of the meeting.

Kashmir girl bags Silver Medal in Thailand, despite fighting all odds
India - The politics of religious hatemongering
It's tragic Priyanka Chopra is sorry for ‘Hindu terror plot’ in Quantico
Of AAP, dreams, and nightmares