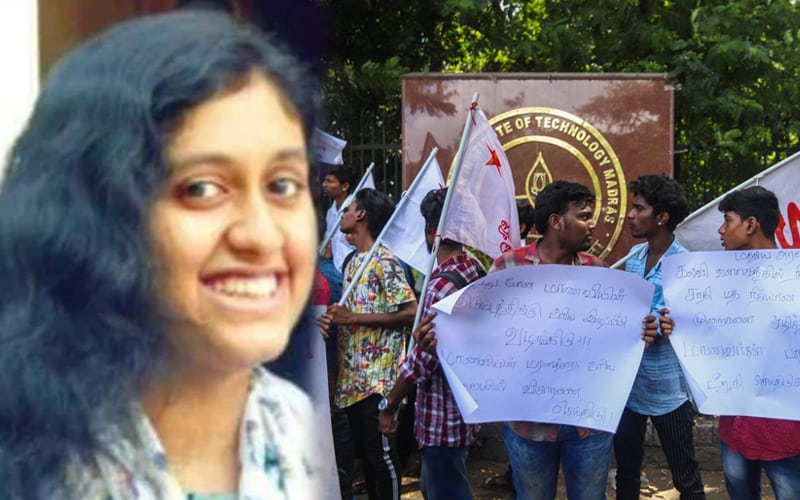 Stand in solidarity with Fathima’s family and fellow students, in their struggle for justice for Fathima!

On November 9th 2019, 19 year old Fathima Latheef, a first year topper student of IIT-Madras, committed suicide citing harassment by Prof. Sudarshan Padmanabhan in a note left behind on her cell phone. This is the fifth suicide on the campus of the elite institution this year with Fathima being victim to not just institutional casteism but anti-muslim harassment from the aforementioned professor. It must be noted that it has not even been six months since the institutional murder of another bright scholar, Dr. Payal Tadvi, due to anti-muslim and casteist harassment by her colleagues at BYL Nair hospital in Mumbai.

IIT-Madras has the utterly shameful record of the maximum number of suicides amongst all the IITs in the country with 14 suicides in the last 10 years[1]. Additionally, there is intense institutional coercion on all concerned student organisations and faculty to remain silent and not seek accountability. Not a single committee has been constituted by IIT-M to probe the rampant institutional murders until Fathima’s case, thanks to the unrelenting efforts of her family and protesting students. It is truly a matter of serious introspection for wider society when Fathima’s twin sister Aysha Latheef is forced to say that “… they [IIT-M authorities] had seemed as if they were used to this. They didn’t seem to find anything new in this matter. Even the students over there act as if there is nothing shocking or surprising over a suicide. It was like a regular, routine affair for them”[2].

IIT-M has so far responded to the incident with shocking callousness. It first put out a statement almost a week later, not with the intent of taking any concrete action but more to salvage the institute’s image, citing that “the uproar is demoralizing to the students and faculty and tarnishes the institute’s reputation”. The statement also extolls the “high quality, integrity and fairness” of the faculty despite the fact that Prof. Padmanbhan had targeted Fathima by deliberately lowering her marks in an internal assessment, as confirmed by the Head of Department’s intervention. Low marking is one of the most common forms teaching discrimination as noted by the pioneering Thorat Committee Report on Caste Discrimination in AIIMS.

After this, in an appalling move, leaked emails have revealed that IIT-M management has decided to install ‘anti-suicide fans’ in all hostel rooms during the ongoing winter vacation. The rationale being that the special ceiling fan rods would expand in the gruesome event of a student trying to hang themselves, preventing the suicide attempt and thereby solving all the deep-rooted structural evils of IIT-M! This latest technological genius of the institute should be seen as the culmination of their diversionary efforts and solutions centred on vague notions of “mental health” and “stress relief” devoid of any comprehensive program to address life-threatening grievances of students, particularly those from extremely vulnerable socio-economic backgrounds. This has been a strategy employed time and again to cover up larger fissures of gender, religion and caste in the institute’s edifice. It does not come as any surprise that despite student protests and demands to constitute an internal committee, they have refused to probe the matter citing that the Central Crime Branch investigation is underway. Students of IIT-M who have formed a Joint Action Committee (JAC) demanding Justice for Fathima Latheef continue to demand an internal probe. This is no mean feat considering the hounding faced by student organisations like Ambedkar Periyar Study Circle (APSC) which faced a ban by the institute in 2015 and are constantly under the management’s surveillance for initiating critical discussions on the current regime and various social issues. WSS stands in solidarity with the students’ efforts and demands.

It is indeed a marvel, yet to be exposed to the public, as to how IIT-M has remained a staunch brahmin-savarna bastion despite being located in one of the most progressive states when it comes to reservation. The institute has consistently employed underhand techniques to maintain exclusivity at the cost of muslim and dalit-bahujan students and faculty. Even though Muslims comprise 15% of India’s population, they are worse off than scheduled castes and tribes when it comes to higher education, accounting for only 4.4% of enrolled students, the numbers being even more stacked against Muslim women[3]. In IIT-M, while the general category has been zealously guarded for savarna students through casteist admission practices, the recent implementation of 10% reservation for EWS category has only bolstered such discriminatory functioning[4]. At the faculty level, as per official data, less than 3% of those teaching at IITs across the country are from reserved categories. Of the 6,043 faculty members at the 23 IITs, 149 are SC and 21 ST[5]. The continuing state of affairs at IIT-M has everything to do with the abysmal state of representation which has perpetuated a teaching monopoly of the high-born castes, fostering mediocre academic output, with IITs unable to make it to any kind of research excellence lists globally. Religious deities and quotes from Manusmriti, the classic sexist-casteist literature of sanatana dharma, blatantly adorn the walls of the premier institution. IIT-M had also recently approved separate dining halls for vegetarians and non-vegetarians and adopted Sanskrit name boards for campus facilities. It is such a context of tight control by a coterie that also paves the way for rampant sexual harassment with utmost impunity in academic spaces as shown by the metoo movement.

Today we are witnessing the rapid consolidation of a fascist Hindu Rashtra, both through structural means as well as mass violence, leading to Muslims facing an unprecedented existential threat in the country. In addition to the relentless lynchings and escalating all-round isolation of the community, the imminent all-India NRC and CAB, being pushed by the BJP regime, aim to transform the Muslim community from their current second-class status to persona non-grata overnight. In the sphere of higher education, we are seeing the preceding phase of untouchablisation of Muslims, as seen in the case of the Dr. Feroz Khan, a Muslim scholar of Sanskrit, targeted by ABVP in BHU. Fathima saw this clearly when she told her father that her Muslim name itself is a problem in IIT-M.

In light of above, WSS demands:

1)     Immediate institution-level inquiry in IIT-M, probing the role of Sudarsan Padmanabhan and any other person(s) involved in creating the situation that led to Ms. Fathima’s suicide. The committee should consist of at least one Muslim, with 50% comprising of SC, ST and OBC members. There have been a number of claims and counter claims around a second suicide note and we demand a fair and independent probe to bring out the truth.

2)     Constitution of a committee on the lines of Prof. Pavarala Committee Report (HCU, 2008) and Prof. Thorat Committee Report (2007) to prepare a comprehensive report on suicides and structural problems in IITs across the country. As demanded by the Ambedkarite and progressive student organisations of IIT-Bombay, the AK Suresh Committee report on the institutional murder of Aniket Ambore (student of IIT-B) should be made public and recommended actions taken.

3)     Passage of Rohith Act and creation of a universal caste (SC, ST and OBC) and religious (Muslim and other minorities) discrimination grievance redressal mechanism across educational institutions and workspaces.

4)     A discussion in the current Parliament session on justice for Fathima Latheef and the endemic nature institutional discrimination.