Yakub Memon – From messenger to mastermind 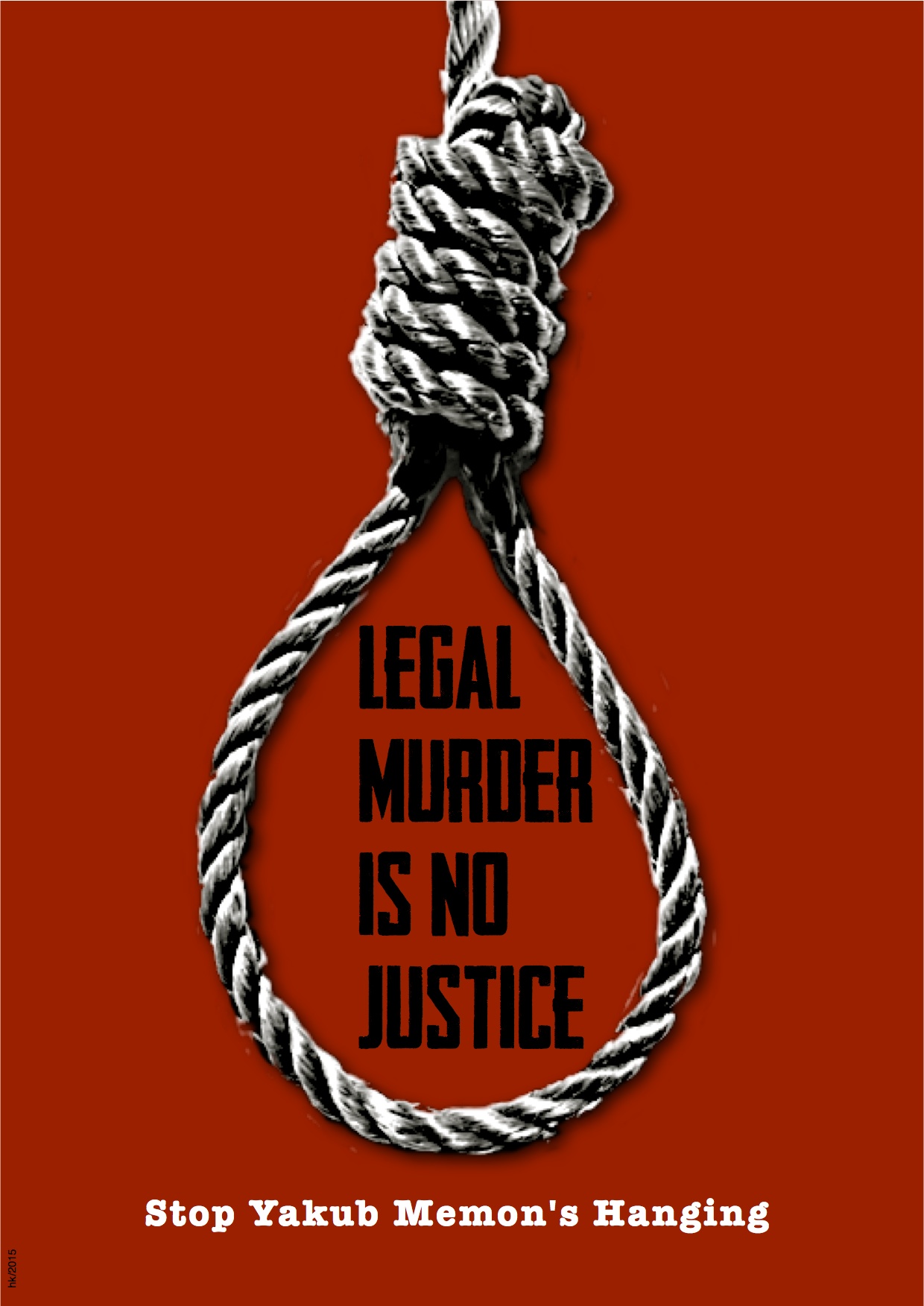 Inmates prepare an enclosure for the media at Nagpur Central Jail, as the execution date of Yakub Memon nears.

Yakub Memon would pay for his brother’s sins and become the only man to be sentenced to death in the Mumbai blasts case.

Her name is Zubeida.

Her father abandoned her mother in an alien, hostile land a few days before her birth and left for an important mission, with a promise that he will see the mother and child within a few months.

Yakub Memon left his wife Rahin in Karachi and surrendered at the Tribhuvan International Airport at Kathmandu in July 1994. Rahin delivered the baby in Dubai and hoped that both mother and child would unite with Yakub in New Delhi to start life afresh.

“I was scared that any delay in returning from Pakistan would cause more obstructions for my return to India to clear my name. I am a man of conscience. I wanted to disassociate from Tiger’s misdeeds,” Memon desperately tried to explain to me when I was trying to coax him into giving me a detailed story of his escape from Pakistan.

This was in 1998. I was working as a journalist in Mumbai and was also doing research for my book Black Friday. I had become a regular at the specially designated TADA court which was handling the mammoth trial of the 1993 Mumbai serial blasts. The logistics of ferrying 100-odd accused from Arthur Road jail to the sessions court at Kala Ghoda in south Mumbai every day was a daunting task for the jail security , so they simply carved out a court within the precincts of the jail.

By then the whole Memon clan knew me, including their manager Asgar Mukadam, the first to be arrested, and the thick-bearded driver, Abdul Gani Turk, who parked a Jeep with explosives near the passport office in Worli, killing over 110 people.

However, Yakub was a cut above the rest. He spoke to me in deference and was also quite keen to share his story with me. But he was afraid that if I went ahead and wrote the story before the conclusion of the trial, it would hamper his case. Occasionally, he used to drop nuggets of ambiguous information which turned out to be very precious when I followed it up.

Yakub was a smart and conscientious man. He was a professional Chartered Accountant, running a successful company with a Hindu partner, Chetan Mehta. According to Yakub’s statement to the Central Bureau of Investigation, the first time he heard about the serial blasts on March 12, 1993 was on BBC News at 4 p.m. in Dubai.

In captivity in Pakistan

The whole Memon family, holed up in Dubai at the time (two of the brothers had resident visas in Dubai), was stunned when they heard of the blasts. Tiger Memon was the only exception; he wanted to celebrate. The fear of the Dubai government hastily deporting the family to India forced them to leave for Pakistan where Tiger had arranged for their stay. In Karachi, they were shuffled from one palatial house to another, and finally dumped at a discreet enclave in Defence Colony. They were also chaperoned to Bangkok and back when the pressure got too much and the Indian government began mobilising support from the international community to deport them.

However, the Memons, excluding Tiger and Ayub Memon, were unhappy in captivity. The Inter-Services Intelligence (ISI) was serenading them all the time. They were yearning to return to their homeland.

But Tiger and the ISI were dead against the idea of the clan of nine people returning to India. Yakub was no brave-heart , but one single moment of determination defines the difference between the courageous and the coward. He resolved to defy his own monstrous brother and the ISI, and fight against all odds to return to India.

Writing accounts and maintaining ledger balances had taught him the dexterous art of evening out all the columns, so that there were no anomalies and loose ends on paper. He began collecting evidence against Taufiq Jaliawala, the ISI kingpin of the serial blasts; took videos of all the secret locations; took pictures; taped the conversations and then gathered documentary evidence including fake passports and multiple identities that were issued by the Pakistani government.

Once his suitcase was full of evidence, Yakub booked a Karachi-Kathmandu-Dubai-Kathmandu-Karachi round ticket on a Lufthansa flight, so that his ISI captors would be certain of his return and create no obstacles to his trip. Yakub knew he couldn’t go to India directly. Surrendering in Dubai could prove to be disastrous as Pakistan and Dubai bureaucrats worked in tandem. He zeroed in on Kathmandu because he thought that Nepal was inclined towards India. He wanted to make a genuine mistake.

At the security check, Yakub fumbled with the lock of his briefcase and several passports tumbled out. An alarm was raised and Yusuf Ahmad was immediately detained. Within no time he confessed that he was actually Yakub Memon and within 48 hours he was handed over to the Indian government in a secret operation. The CBI version differs slightly. It says that the security noticed something akin to a gun in Yakub’s briefcase, asked him to open his briefcase, and all the passports tumbled out.

After his arrest in Nepal, Yakub was dumped near the Nepal border and a special plane brought him to New Delhi. He was shown as arrested at New Delhi railway station, which, Yakub wrote in a letter, he has never seen in his life.

In a thrilling operation, CBI officers whisked away the Memon clan right from under the ISI’s nose. Hoodwinking the ISI pursuers, eight members of the Memon family were brought back to India. Perhaps this is the only time in Indian history where eight Pakistani passports were stamped with Indian visas in a matter of minutes without even meeting the applicants.

Except for Tiger and Ayub and their wives, the whole Memon clan was back. Rahin joined them after a few days with the month-old Zubeida in her arms.

Hoping for a reprieve

The whole operation was made possible due to the sheer temerity and tenacity of one man, Yakub. After accomplishing this almost impossible mission, Yakub expected a reward of leniency and clemency. But the government turned on him. Yakub was interrogated and physically tortured in jail, and even driven out to a deserted spot and told that there would be an “encounter”.

But Yakub had nothing to add beyond what he had said on television or to his early CBI handlers. Now he was hoping for a reprieve. Weeks turned into months, months into years, and years into decades. But he got no respite.

It has been 21 years since Yakub promised a pregnant Rahin that he was leaving for India to get their names cleared. But to his dismay, he has only found himself inching closer to death.

We have put Yakub on the same boat as Lashkar-e-Taiba gunman Ajmal Kasab. One man returned to expose the villainy of our neighbouring country and his own brother; another sprayed bullets on hapless victims in Colaba.

Ironically, Yakub has been the biggest loser in the trial. He brought so much evidence to the Indian agencies, and yet became the mastermind in the case. In a heated argument, his brother Tiger had told him, “You are going as a Gandhian, but you will be hanged as Godse”. Yakub had retorted, “In time, I will prove you wrong”.

It is sad that the Tiger Memons of the world are always proved right while the Yakubs are sentenced to hang.

(S. Hussain Zaidi is an investigative journalist and the author of Black Friday.)

YAKUB MEMON’S VERSION OF EVENTS AS TOLD TO WRITER

Heard about the blasts while in Dubai in March 1993

Found with many passports in Kathmandu

Deported to India on a special plane

Left his pregnant wife in Karachi in 1994

Arrested and called mastermind of the blasts

We have put Yakub on the same boat as Ajmal Kasab. One man returned to expose the villainy of his own brother; another sprayed bullets on hapless victims in Colaba