Health Minister Vijayabaskar’s sexist comments to the woman reporter were caught on camera. 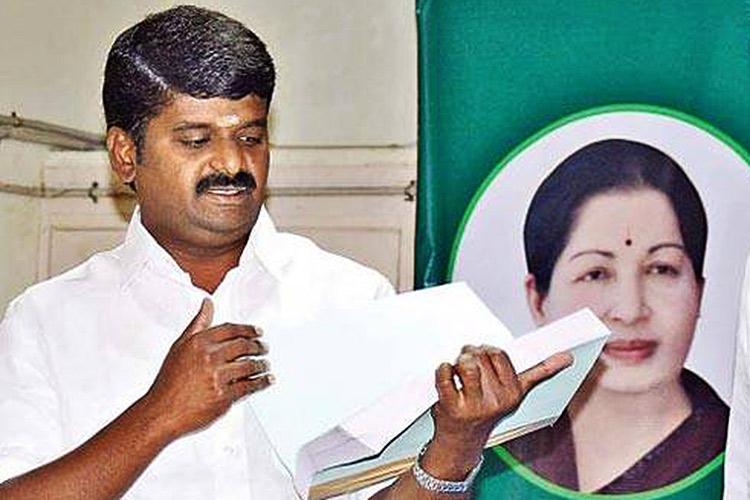 Controversy is an old friend of Tamil Nadu’s Health Minister C Vijayabaskar. On Thursday night however, he established himself as creepy and shameless, as well as controversial. The minister was questioned by a woman reporter about what had happened at a late-night MLA meeting of the AIADMK that he had just attended, and instead of giving a straight reply – or even simply walking off – the man decided to bring out his inner creepiness.

“Your specs are nice,” the minister began, when asked about the meeting. When the reporter persisted with her question, he reiterated: “Your specs look good!”

The reporter, who remained professional throughout, said, “I wear these specs everyday. What was discussed in the meeting?”

While the reporter in question wishes to stay anonymous, the entire incident was caught on camera.

It’s not the first time Health Minister Vijayabaskar has been in the eye of controversy. In April last year, Vijayabaskar’s residence in Chennai and several other properties belonging to him and his relatives across Tamil Nadu were raided by the Income Tax Department. With the raids coming ahead of the RK Nagar bye-elections, which were originally scheduled for April last year, the ruling AIADMK had called it political vendetta. However, IT officials later told TNM that the raids on Vijayabaskar were in connection with the Gutka scam and his alleged links with mining baron Sekhar Reddy. A source in the IT Department had told TNM that the Health Minister’s name figures in a diary seized by sleuths during raids on a gutka manufacturer.

“Since he was the Health Minister, they had to keep him in good books. While the exact amount he received on a yearly basis is not certain, it can be said with confidence that he was being paid for his cooperation for this unlawful activity,” the IT official had told TNM last year.

Mother of slain backpacker writes angry letter to Trump over terror list
#India- Sainath plans online ‘People’s archive of rural India’
“In our 47 years with the tribals we have never come across rape; they may go hungry but never steal...
ATTN #delhi- Public Hearing on Women in the Unorganised (Unprotected) Sector in the Era of Globaliz...