Cops in Mumbai recorded Dangal actor Zaira Wasim’s statement as they begun an investigation into her allegation that a male co-passenger harassed and molested her during a Delhi-Mumbai flight. The Mumbai Police has begun its investigation into the alleged molestation of Dangal star Zaira Wasim. Cops have recoreded Wasim’s statement in Mumbai, where she landed after her harrowing flight during which, she alleges, a male passenger rubbed his foot along her neck and back.

Wasim revealed her distressing experience in a series of Instagram videos – one shot during the flight, during which the man’s foot can be seen next to Zaira, and the other at the Mumbai aiport in which the teary-eyed teen actor asks, “Who is going to help us Girls? If we don’t help ourselves, nobody will come ahead.”

Cops from the Mumbai Police have spoken to the actress, recorded her statement and have prepared a list of passengers sitting next to Zaira on the Vistara Delhi-Mumbai flight during which the alleged incident took place.

The airline has provided details of the man in the question and policemen intend to question him, as well as other passengers, soon, sources within the force said.

Statements of the crew members on the flight too will be recorded. One of the most intriguing questions arising from the shocking story is why the cabin crew, usually trained to handle inappropriate passenger behaviour, did not react.

Zaira’s manager Tuhin Mishra earlier said the teen actor had raised an alarm but the cabin crew failed to take any action. Sources within Vistara, while admitting the cabin crew did not act until much later said it was because Zaira raised the alarm only after the flight started descending.

According to protocol, everybody, including passengers and flight crew, must remain strapped to their seats while a flight is landing. Zaira, in her story, did not specify when exactly the male passenger seated behind her began touching her with his foot and rubbing it on her neck and back.

Soon after the Zaira’s Instagram posts narrating the ordeal, Visatra released a statement saying it was “aware” of incident and was carrying out “a detailed investigation”.

“We are talking to our crew who were serving Ms. Wasim to understand the incident at greater length, and reaching out to fellow passengers as well. We will support Ms. Wasim in every way required and also if she decides to report the matter to the police,” the airline said. 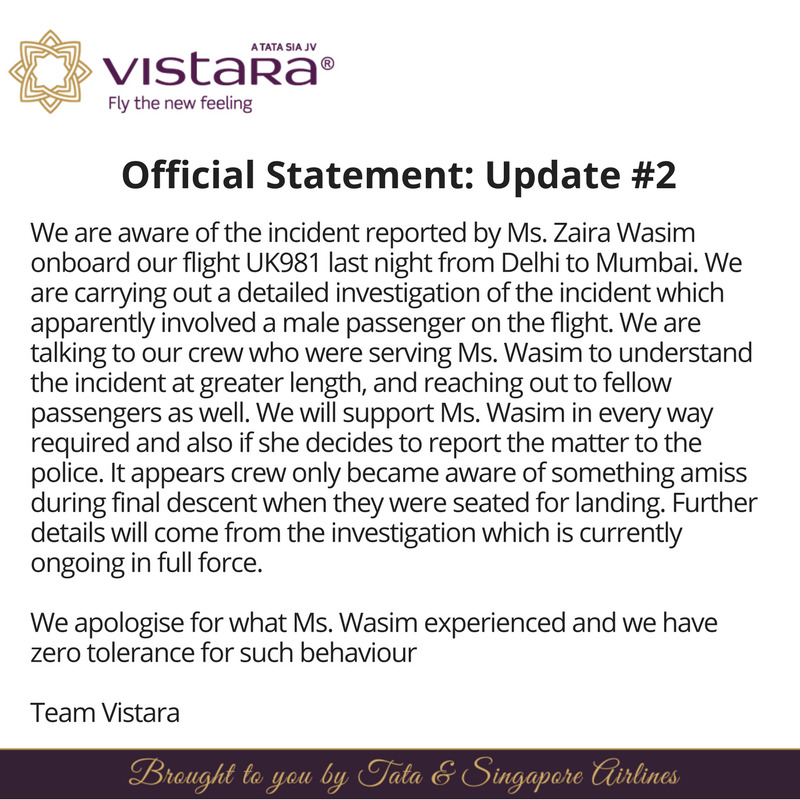 “It appears crew only became aware of something amiss during final descent when they were seated for landing. Further details will come from the investigation which is currently ongoing in full force,” the airline added, before apologising to Zaira for what she had experienced. “We have zero tolerance for such behaviour.”

‘CREW COULD NOT ACT’

Meanwhile, sources within the airline said the Dangal actor began yelling at the man in question only once the Vistara flight started descending and was on the final landing path.

At that moment all crew members were “seated in their seats” and “couldn’t move because it is mandatory to have no movement during the final phase of the flight as seat belts are on,” one of the source said.

Once the flight landed, the crew was told about what had happened with Zaira. The crew asked the teen actor and her mother whether they wanted to file a complaint, but they, the sources said, “denied”.

Vistara is yet to contact the male passenger whom Zaira accused of molesting her but has summoned the entire cabin crew for an inquiry, the sources further added.

The last part of the Vistara sources’ version, that Zaira and her mother did not want to file a complaint, was denied by the actor’s manager Tuhin Mishra even as Mumbai Police, which has taken cognizance of the matter, reached the her hotel to record her statement.

Police officials said Zaira has asked for some time to give her statement and the cops have posted a lady officer at the Hyatt hotel, where the actor is staying, to record her version of the events. Police will be in a better position once the Zaira gives her statement, officials said.

National Commission for Women (NCW) has taken cognise of the reports and they will be calling the airlines to get details of what transpired and action taken by them in the matter.

State Women Commission will also write a letter to DGCA, Airlines and Maharashtra Police to investigate the matter.

“Vistara hasn’t sensitized their crew to take action against men torturing women on the flight. I am taking suo moto cognizance of this & giving notice to Vistara. Also, a copy to DGP Maharashtra to act against Vistara Airlines. I would like to tell Vistara that if they have zero tolerance why they have not named this person till now. Naming them is very very important. We would like to tell Zaira that we are there to help her out in any way we can,” NCW Chairperson, Rekha Sharma said condemning the harrowing incident

– Nagarjun Dwarkanath in Bengaluru contributed to this report