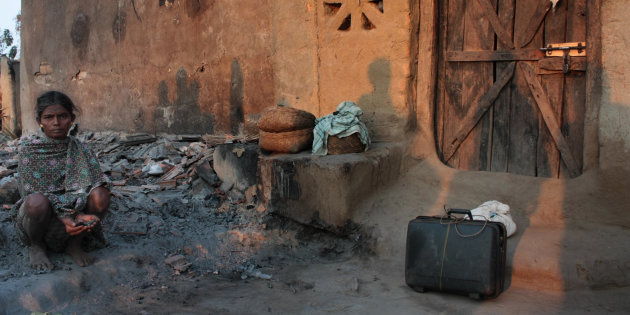 AMAN SETHI A victim of the 2011 police raid in Tadmetla with all that remains of her possessions.

NEW DELHI — The Central Bureau of Investigation (CBI) dropped the testimonies of key witnesses, ignored its own findings and withheld critical information from the Supreme Court in a 2011 case accusing the Chhattisgarh police of burning over 300 homes, killing three men and raping three women in the course of a counter-insurgency operation in 2011, according to an internal memo leaked to HuffPost India.

The memo, HuffPost India learnt, was intended as the basis for the CBI’s chargesheets and closure reports submitted to a Raipur special court in October 2017, as part of a Supreme Court monitored investigation into human rights violations in Chhattisgarh.

The memo was shared with HuffPost India as allegations of corruption within the CBI, traded between the CBI’s former Director Alok Verma and his deputy Rakesh Asthana, has resulted in the disclosure of key information that had been suppressed in the course of its investigations.

HuffPost India has written to the CBI and will update the story once the agency replies.

The CBI’s actions in such a sensitive case offer fresh evidence that the institution described as both India’s premier investigative agency and a “caged parrot”, can’t always be trusted with cases that prove inconvenient to its political masters.

The closure reports were submitted to the Special Judicial Magistrate, CBI Raipur in 2017, when the Bharatiya Janta Party (BJP) was in power in the centre and in Chhattisgarh — a situation that continues to this day.

A comparison of the closure reports filed by the agency to the court, and the internal memo, shows the following discrepancies:

Perhaps the most chilling aspects of the memo touch upon what passes for standard operating procedure in Chhattisgarh.

The Chhattisgarh police, the CBI found, “could not submit the details of arms and ammunition issued to all the police force who had participated in the operation.”

“This is really a very worrisome fact and has got serious ramification, where there is no strict accounting and the government is not sure about the exact number of ammunitions issued to its personnel. This could even lead to illegal trading of ammunitions to the very perpetrators of naxalism and terrorism.”

Further, the inquiry found that the Chhattisgarh police had given the CBI an incomplete information on the number of police officers who participated in the raids.

The implications are profound, as the memo notes, “There is a possibility of commission of crime by those personnel, whose names are not reflected in the official records and yet remain away from clutches of law as no record would show their names for having participated in the operation under question.”

In 2011, this reporter and Anil Mishra, a reporter with Rajasthan Patrika at the time, reported on the aftermath of a scorched-earth counter-insurgency operation by the Chhattisgarh police in Bastar’s Konta block, that ended with three villages in flames, three alleged deaths, and three alleged rapes.

When the Chhattisgarh police attacked convoys of relief materials headed for the affected villages, the matter was brought to the Supreme Court who directed the CBI to investigate the matter in July that year. The matter was taken up sociologist Nandini Sundar, who was already fighting a on-going case on the constitutionality of counter-insurgency operations in Chhattisgarh, particularly the deployment of civilian vigilantes in the Salva Judum.

In the course of its investigation, the CBI’s investigating team was itself attacked by the Chhattisgarh police to stymie the investigation. In October 2016, the agency filed a set of closure reports that downplayed most of its findings and focused on punishing junior policemen rather than focussing on the IPS officers who planned the operation.