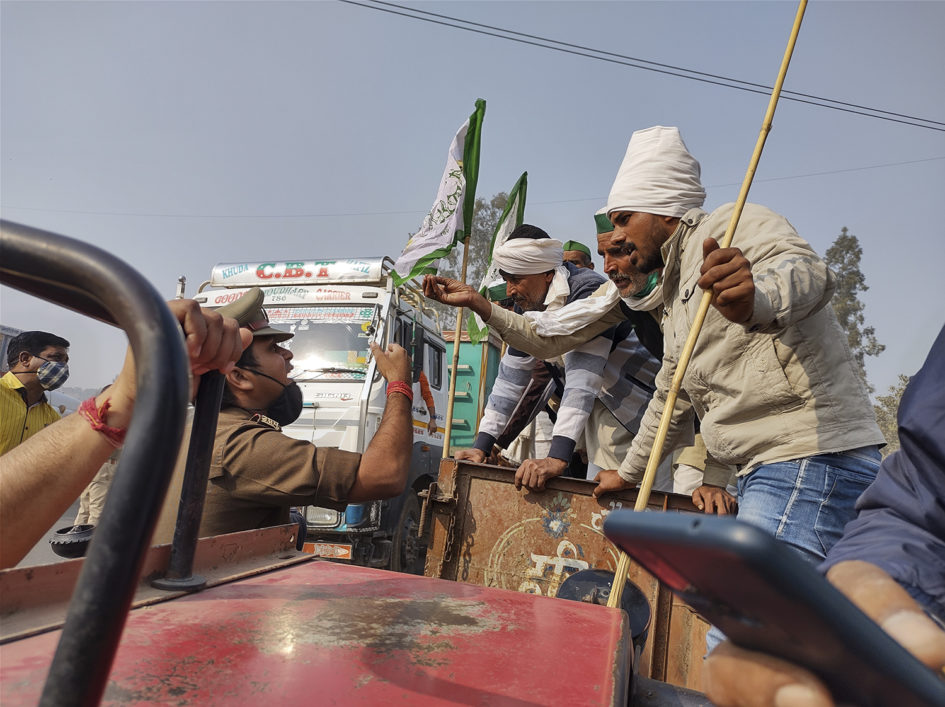 Police and anti-farm laws protesters in Baghpat, Uttar Pradesh, on 3 December 2020. According to three farmers’ leaders of UP, the police is trying to suppress the ongoing movement against the three new farm laws in the state. SUNIL KASHYAP

According to three farmers’ leaders of Uttar Pradesh, the police is trying to suppress the ongoing movement against the three new farm laws in the state. Ramjanam Yadav—from the prime minister Narendra Modi’s parliamentary constituency, Varanasi—gave a speech at a farmers’ sit-in on 27 December 2020, and two days later, an inquiry was initiated against him under the Uttar Pradesh Control of Goondas Act of 1970. Lakshman Prasad Maurya, Varanasi’s district president of the Bharatiya Kisan Union (Arajnitik), said the police threatened him on a phone call to not join the protests. Richa Singh, a senior leader in Sitapur district, said police officials tried to deter her from joining a protest on 8 January and did not let her step out of her house the next day. Yadav said, “This government wants to show that the farmers of Uttar Pradesh have no problem with the laws.”

Yadav was an activist for around thirty years in Varanasi, and is presently a member of the political party Swaraj India. He told me that between 25 and 30 December, he visited different sit-in protest sites at the borders of Delhi, Haryana and Uttar Pradesh with two of his companions—Maurya and Faizul Rahman Ansari, a weavers’ leader. Tens of thousands farmers from different states, predominantly Punjab and Haryana, have been protesting the laws at these sit-ins since end November 2020. “On 27 December, I also gave a speech on the protest at the Shahjahanpur border”—on the Rajasthan–Haryana border—he said. “At that time itself, a person there said to me, ‘Your video must have reached your district magistrate and senior superintendent of police by now.’”

The notice about the Goonda Act, dated 29 December 2020, does not cite his participation in the farmers’ movement. Instead, it states the inquiry is being initiated for a case registered against him in December 2019. Yadav told me that he was among 70 individuals who were implicated in that case for participating in a demonstration against the Citizenship (Amendment) Act of 2019. “At that time, we had participated in a procession from Beniyabagh to Laksa against the CAA and NRC,” he said. In that case, he was booked under several sections of the Indian Penal Code, including those pertaining to punishment for rioting, rioting armed with a deadly weapon, unlawful assembly and disobedience to order duly promulgated by public servant. “That time also, these people had converted that place into a police cantonment. We had been jailed for 17 days,” he said.

Yadav added that an inquiry under the Goonda Act has been initiated against eight farmers’ leaders in total. “The government of Uttar Pradesh wants to suppress the movement and the kind of case they have done on me, they are doing with other farmers’s leaders too.” Yadav mentioned that on 8 January, during the Bharat Bandh, several protests against the farmers’ laws were also stopped because of “the police’s hooliganism.”

Singh, a senior activist in Sitapur, said the police tried to ensure that she did not join a tractor rally on 8 January. Singh is a member of Sanghatin Mazdoor Kisan Sangathan, a women farmers’ organisation. According to her, several organisations in Sitapur had also called for participation in the Bharat Bandh. “As soon as I stepped out that morning, I saw two policemen sitting ten steps away from my house,” she told me, before adding that the men stopped her. Singh said she informed them that she was going to a farmers’ tractor march which was beginning from the RMP College. “For a while they kept telling me, that the march had been cancelled and no one is there. I said, ‘No problem. I will go there and if no one is present, I will come back.’” She said she ended up attending the march, but the two policemen accompanied her through it.

That evening, she said, she had to go to Lucknow for a doctor’s appointment. “At 6.30 pm, I left my place. As soon as I stepped out, four or five police officials appeared,” Singh told me. “One of them was a policewoman and one was a Sadar Chowki in-charge.” She said they asked her to speak to the kotwal, or the station house officer, Tej Prakash Singh, on call. “The kotwal said, ‘I request you, please do not step out.’ I told him, ‘This is considered detainment.’ He replied, ‘I am requesting you.’ I asked to him to tell me on paper on what basis I am being detained or let me go,” Singh told me.

She said after this, a woman inspector, a state administration official—whom she could not identify—and even the sub-divisional magistrate Amit Bhat came to her house. “They did not let me go to Lucknow,” she said. Singh told me that she asked the unidentified administration official, “Why do you not declare that there is an Emergency? No one can come or go anywhere?” According to her, the official assured her, “Our office is opening now. We will sign, and give you the paper,” and then left. Singh said even Tej Prakash arrived at her house sometime that evening. When she did not receive any document detailing her detainment till 10.30 pm, she said, “I told the kotwal, ‘Now you all can go. I will not go anywhere.’”

They left, but Singh told me a policeman was on duty outside her house through the night. When I first spoke to her on 9 January around 3 pm, she said, “Even as I am talking to you, a policeman is standing here in plain clothes.” She added, “I spoke to him also. This means that if I go out, he will give that information to the police. Then all those people will come, and then the same situation as yesterday will begin.” She said she called Tej Prakash to seek permission to leave the house. “After calling so many times, they keep saying they are coming just now to find some solution,” she said. “It has been so long now that they have spoiled my day.” Around ten days later, Singh told me that there was police presence outside her house till the night of 10 January.

Singh said she was getting several calls from state authorities inquiring about the farmer’ protests. She told me she has led many movements in Sitapur since 1996. “But I have never received as many calls as I have since the farmers’ protests began in Delhi,” she said. Singh said that the workers in her union were also getting such calls, and she thought all of them were being surveilled.

Maurya, too, said that the police had called him several times since the protests began. According to him, even before the 8 January bandh, whenever the farmers’ organisations on Delhi’s borders called for protests against the laws, organisations from Varanasi held demonstrations. “When a call was given for a bandh on 8 December, our allies from Benaras as well as other social workers decided that we should also hold a demonstration here,” he said. “So, early morning that day, the Sarai Mohana Chowki in-charge”—Abhay Singh—“came to my house and said that, ‘You will not participate in the program which is being held on Salarpur Satrangi Tirahe.’ Somehow, we all reached the tiraha”—an intersection of three roads—“and held the demonstration. But there was a huge police presence there and they did not allow for our programme to be conducted as we had planned it. Our loudspeakers were shut down.”

He said even later, whenever there was a protest call from Delhi, the police began calling and threatening him that “No program should be held in Benaras.” Maurya said that a demonstration was scheduled on 23 December, Farmers’ Day, at the district headquarters. “Again, I received a call from the police,” he said. Maurya said even when he was heading to the sit-ins with Yadav and Ansari, “I kept getting calls from the chowki in-charge. He was asking my father’s name, my village’s name and threatening on the phone. When this kept happening for two days, I stopped picking up their call.”

Yadav and the other leaders emphasised that the ongoing protests were notable due to many reasons. “From what what I can recall, it was so huge and disciplined and just by speaking to a common farmer there, it becomes clear that they understand the three laws well as well as the intention of the government,” he said. They agreed that there was a deliberate attempt to keep Uttar Pradesh out of the protests due to this. Maurya thought that the crackdown on farmers’ leaders and protests was an attempt to portray Uttar Pradesh as a pro-farm laws state. “See, this is Prime Minister Narendra Modi’s Lok Sabha constituency, so this Yogi Adityanath government wants to show that no voice from Benaras can go out,” he said. “This government wants to break our morale by scaring us like this.”

Singh said that the purpose of this was to stifle the protests. “The police has been ordered to stop all the protesters at any cost workers, so that they cannot step out, so that no one finds out that there is a movement in UP as well,” she said. “Sitapur’s name should not be heard in Delhi, so that it looks like there is no farmers’ movement here.” She added, “There is only police raj in UP, no such thing as a democracy.”

Abhay, from Sarai Mohana Chowki, told me that he had spoken to Maurya but claimed that he never threatened him or asked him not to protest. Tej Prakash told me that he personally knew Singh as they both had roots in Azamgarh. “I often frequent her house. If we had detained her, we would have provided her with some document which says so,” he said. However, Singh said that the fact that they both roots in Azamgarh was brought up in conversation that day and “he was trying to create some sort of a personal association. He never came to my house before then.” I called Bhat, the SDM, for a response on the incident, but he did not pick up the calls. When I asked Tej Prakash about Bhat’s presence at her house that day, he said, “It is not in my knowledge why the SDM was present there.” I called, messaged and emailed Kaushal Raj Sharma, the district magistrate of Varanasi, about the inquiry against Yadav, but he did not respond.

On 7 January, members of the People’s Union for Civil Liberties, a human-rights organisation, visited the office of Deepak Agrawal, the commissioner of Varanasi division, to complain about the inquiry against Yadav. Aflatoon Desai, a social activist in Varanasi who was among the PUCL members, said that he thought that the chief minister is misusing the administration. “When the government of Yogi Adityanath is not able to suppress the farmers’ movement through his party, it is making full use of the government machinery for this purpose,” he said. “Humaare yahan ek kahawat hai”—We have a saying. “A gunda is a man who harasses the weak and licks the boots of those more powerful than him. Yogi is like that.”