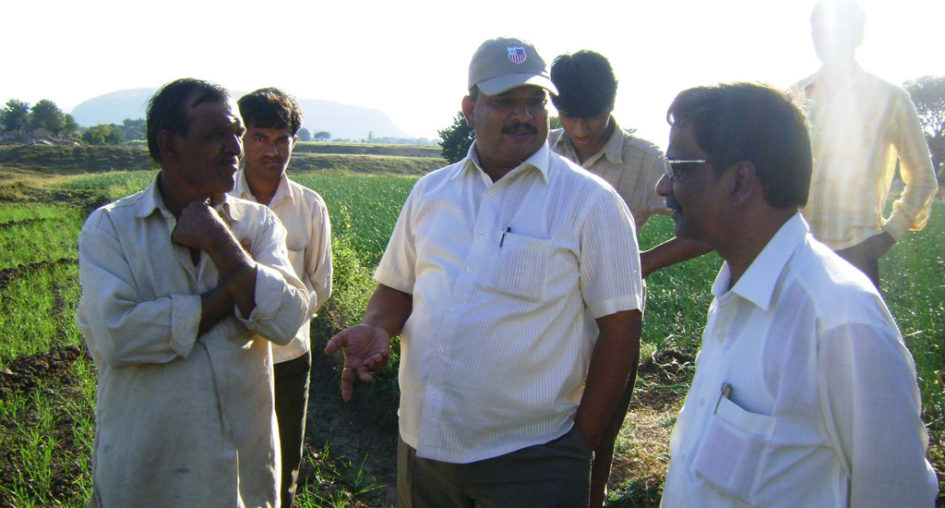 The shocking, unexpected demise of Sunil Pote comes as a blow, not only to farmers of Sinnar taluk of Nashik district, but to the larger development sector in which Sunil brought about a fresh outlook through revived development initiatives. His work which commenced with revived phad systems for diversion-based irrigation, matured to incorporate modern business approaches in the farm value-chains through farmer producer organizations. In this work Sunil and his wife combined strong social processes with a hard-nosed business approach.

The word phad in Marathi means a group of people who come together to achieve a specific purpose. The word is used in at least two, though wholly unrelated, contexts. The first one is “phad” of Indian style wrestling, the word used in a sense equivalent to dangal in Hindi. The second one refers to a particular form of diversion-based irrigation created by or at least for a group of farmers deriving benefits from it. In this article, we are concerned with the second.

Known only to the older resident farmers of certain areas in Maharashtra and generally lying below the radar of a lot of water professionals was a system of phad irrigation created in over 200 locations in western Maharashtra. Water would be sourced by installing a short gated bund on a river. This would raise the level of water. This water would be diverted through a channel running perpendicular to the river flow direction and then taken through a network of smaller canals to farms reachable through gravity.

Management of phad was the responsibility of the farmers who benefited from the scheme through a socially controlled rotational irrigation scheduling system. Clearly, close cooperation and coordination was needed among them for ensuring that each farmer received water for irrigating his farms and cultivating crops in the dry season.

In some locations the system was purely a socially instituted and people-managed system; while in some locations it took the form of a participatory irrigation management done on behalf of the revenue / irrigation department of the government. So long as the revenue collection was about the only source of government income and the revenue rates for lands deemed to be in the command of the phad were taxed at higher rates, the state nudge made the farmers manage the phad well.

However as one may expect, those nearer the source of water had much to gain by grabbing a greater share of the water and they could do it by breaching the phad rules. Wherever such people were socially and / or politically better connected, they did so with impunity. As a result, the tail-enders would stop receiving water.

Many of them found shifting to well or tube well irrigation, a convenient alternative to confronting the head-enders and fighting for their right. When water stopped flowing through the canal network for a number of years, farmers’ interest in maintaining the sanctity of the canal network was lost and they encroached upon those lands as well. Over a period of time this system collapsed into disrepair.

Sunil Pote, a resident of Sinnar tehsil of Nashik district, chose to work for the revival of this system. He started by working on a major defunct phad irrigation system on the River Dev in the tehsil. The difficulty was that the phad had fallen in disrepair. I visited this site after restoration of the phad system and Sunil showed the network to me.

The farmers now tilling the lands were in their forties and had never seen water in those canals till the system was restored. Their parents however reminisced about how they would “jump in the flowing canal water for a dip and a swim”.

Sunil told me how he had to dig up old cadastral maps and records of the revenue department, argue with farmers how the encroached portions of their lands were actually meant for the phad canal network and persuade them to vacate and dig up the canal to make the water flow again. He did a stupendous job and restored the whole system on River Dev.

The farmers in the command area comprised different communities, including mali, the traditional fruit, vegetable and flower growers. For them obtaining flowing water for their farm meant a huge golden opportunity as they could use the water with hard work to grow many more crops and for a longer duration and thus earn better incomes.

So Sunil started working with them to ensure that their incomes actually rose substantially. He told me then that large farmers can afford to take chances to grow a single vegetable crop – say tomato – over an acre. “But I find that growing a single tomato crop over a whole acre and planting it all at one go is inviting a disaster. I guarantee that they will incur a loss of Rs 5 lakh,” he told me when I had visited him in 2012.

He devised a simple and very practical way out, though it runs counter to conventional notion of economies of scale. He said no farmer should grow the same vegetable in more than 1 guntha (one fortieth of an acre).

If a farmer wished to grow the vegetable in more than 1 guntha, then he must plant it at different points of time within the permissible calendar limit. (There is a range of a month to a-month-and-half for optimal planting of any crop. So he should plant one guntha on say the 1st, the second guntha on say the 10th and so on, so that he may have five gunthas planted with say tomato, but on five different dates.)

Sunil said that this was optimal because then clearly the harvest would also be staggered. Staggered harvest automatically diversified the market risk and also made the intensity of pest attacks less risky. Such a simple thing to practice! He also argued that when the harvest volumes were small, the farmer or his son could himself sell the produce in the market and need not worry about the behavior of the middlemen and the trader.

A loss to farming community

Later Sunil grew in stature and established a producer company of the farmers with whom he was working. With blessings and active help of Sanjay Belsare, a socially conscious irrigation officer, he developed a large project for revival of many phad systems.

He kept working for the economic well-being of the farmer community. I had many occasions to interact with him. We had invited him in counseling the organizations working on diversion-based irrigation systems to enthuse them about ways to increase farm incomes.

Sadly, Sunil was so preoccupied with his work for the communities that he often neglected his own health. His comorbidity conspired with COVID-19, and we have lost an excellent social worker. But not before he brought smile and prosperity to hundreds of farmers in western Maharashtra. May God bless his immortal soul for the good work he did in this world.

With additional inputs from Girish Sohoni and Biswanath Sinha.