Message from Lalita Ramdas
Coalition for Nuclear Disarmament and Peace

Dear friends,I have just read this deeply moving and passionate appeal written by the women of Fukushima, clearly calling the attention of the world, especially the people of Asia, and particularly our Prime Minister as he prepares to visit Japan later this week, and according to media reports, sign the India-Japan Nuclear Agreement.

I was in Fukushima earlier this year. It was one of the most educative experiences of my life. We visited shattered homes and families, were witness to miles of devastated landscape, thousands and thousands of black bags containing radioactive materials where there should have been fields and crops. I met and spoke to many of the women who have signed on to this letter ……women and mothers deeply impacted and anxious on behalf of the kind of future this scenario offers for their children and grandchildren.

As the women who wrote this letter urge, before our Prime Minister signs the nuclear deal with Japan, he also needs to see this reality, to talk with the people who are still suffering from the devastation and see the human and economic costs of the accident at the Fukushima Daiichi nuclear power plant in 2011, in order to understand exactly what could happen to his own people if he moves ahead with his nuclear program.

The message from the people of Fukushima is powerful, one which none of us, especially our government, can afford to ignore. I hope that the Indian media publicizes it widely.

Indian PM Narendra Modi will visit Japan from 10-12 November, 2016. Civil society organisations of Japan have launched this petition to oppose the India-Japan Nuclear Agreement which the two governments are supposed to finalise during this visit. More than 1900 people have signed it already.Please sign and share widely 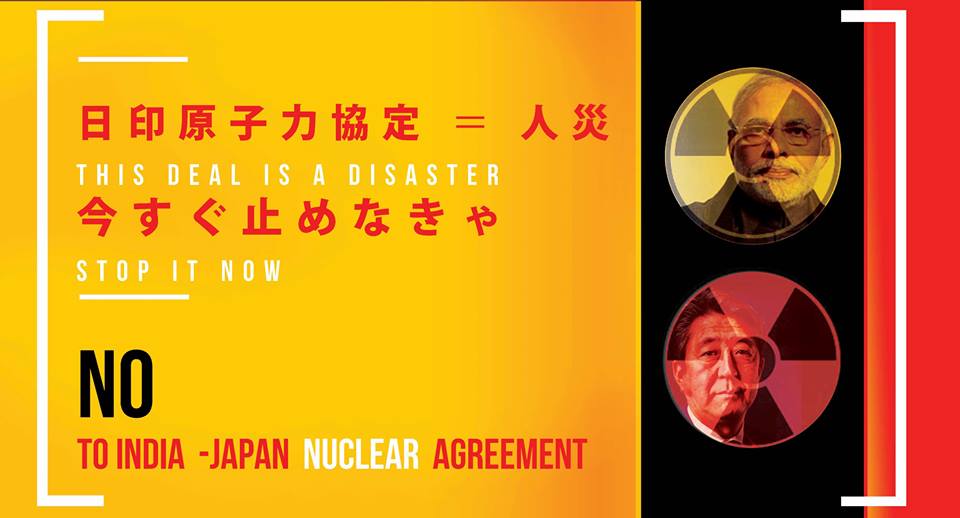 Even now, some five and a half years after this accident, the accident is still unresolved. We live surrounded by radioactive debris which emanated from the reactor. Even as our government pushes us to return to our homelands, many people think of their children’s health, and they feel that they cannot return to their original homes. At the current stage, in Fukushima prefecture alone, some 174 children have been found to have contracted thyroid cancer. We are deeply worried about the wide-ranging health hazards that will appear in the years to come.

Presently court proceedings to determine legal responsibility for the nuclear accident itself have not yet been opened, and the accident’s cause, the question of human error, the question of whether the accident was handled appropriately, have not yet been clarified. Now, the problem of restarting nuclear power plants across Japan has surfaced, and battles are being fought through the courts to keep these plants from restarting. As with Takahama Nuclear Power Station, some nuclear plants’ operation has been suspended.

Under these circumstances, the fact that Japan is attempting to sell nuclear power plants to other countries, is embarrassing and most unfortunate. When we consider that a similar type accident might happen at one of India’s nuclear power plants, we are filled with concern. That is, as women who experienced firsthand the suffering that the Fukushima accident has brought, we do not wish anyone in the world to have the same experience we did.

Mr. Modi, we would like to invite you to visit Fukushima and see its condition firsthand. The destroyed reactor, the towns where people can no longer live that have become like abandoned towns, the mountains of radioactive rubble, the towering incinerators, and children who can no longer play freely outside. After you have seen the reality of Fukushima, then we urge you to think carefully about the nuclear cooperation agreement.Nuclear power plants will not bring happiness to your citizens. We who experienced the injury of the nuclear accident, we came to understand this through our own bodies and lives.

Mr. Modi, for the Indian people and the future of India, please do not sign the India-Japan Nuclear Cooperation Agreement. We beseech you to make a wise judgment.

Fukushima Women Against Nukes
Fukushima Women Against Nukes is a network of women that started in September 2012, using various direct actions such as sit-ins, demonstrations as well as petitioning TEPCO and others to demand justice for everything that the Fukushima Daiichi disaster has taken away from them. They are also strongly opposed to restarting any of Japan’s nuclear reactors and are working for a nuclear free world (website: http://onna100nin.seesaa.net)