“Initially when I joined SWaCH in 2004, it was shocking to see my co-workers removing sanitary waste from the wet waste with their hands. It has been 13 years and even today I have to hand segregate the menstrual waste and deal with flies, insects and the unbearable smell on a daily basis. Twice I was diagnosed with bacterial infection, but now I am used to it.”, 43-year old Sarru Waghmare’s shocking words point to the cruel reality of a waste picker’s life.

Even the most well-meaning of us, dispose our waste without much thought to where it ends up, how and by whom it is handled. Sarru Waghmare works at the Pune waste picket cooperative SWaCH (Solid Waste Collection and Handling). Like her, several other workers face health issues ranging from headache, loose motions to fever.

We live in a society where even discussing menstruation is a taboo. Not surprisingly, the issue of how our menstrual waste is handled is totally brushed under the carpet. However, as Sarru Waghmare’s words show, it is a conversation that needs to be brought out into the mainstream.

Sanitary waste is a silent and a mounting problem in India. Every day, SWaCH workers collect 6.5 lakh kilograms of waste from over five lakh houses of Pune, which they hand-segregate into dry and wet waste. Out of that, 3 per cent is sanitary waste, meaning they handle nearly 20 thousand kilograms of dirty diapers and sanitary pads every day.

To talk about this, SWaCH along with Kagad Kach Patra Kastakari Panchayat (KKPKP), a trade union of waste pickers, and the Pune Municipal Corporation have started the arduous process of inculcating sanitary waste management techniques in more than 5 lakh households of Pune.

The Red Dot Campaign was formally launched on February 7 this year. The city-wide project was launched in two parts, one to raise awareness on ways to dispose sanitary waste and the other, to make sanitary napkin manufacturers more accountable.

Residents of Pune were asked to wrap up their sanitary pads and diapers in paper that was marked with a red dot. This would help SWaCH workers identify sanitary waste and treat it accordingly. To make it easier for the residents to dump waste in pushcarts, the carts were painted red.

The SWaCH team also manufactures fifty thousand red-labelled bags per month and sells them for merely Rs.1.25 per bag as part of their campaign. 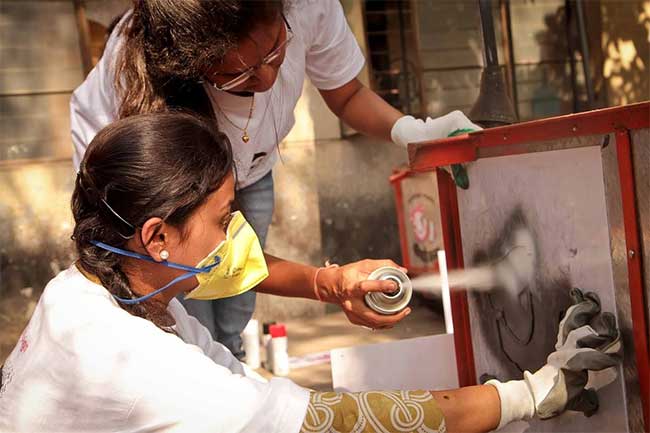 To promote the awareness in an appealing way, the SWaCH team came out with stickers for shops, mugs, flyers and banners. Keeping digitization in mind, all information related to the red dot can also be accessed with a simple QR code.

Health and Dignity at stake?

Every day, waste pickers rummage through waste to segregate it, exposing themselves to various diseases, like staphylococcus, hepatitis, e coli, salmonella and typhoid.  In fact, the stress of handling people’s waste on a daily basis has many more ramifications.

Malati Gadgil, who heads the campaign, tells us how many sanitary workers even lose the will to eat because of their work.

We all like to eat in clean surroundings and with clean utensils. You can hardly go from changing a diaper to eating right away even if it is your child. Imagine being faced with it every day.

The kind of waste they get exposed to is not just harmful for them but also against their dignity of labour.

It is hard to categorize diseases but handling blood and feces is an issue which is why even hospitals and path labs are careful, using disposables and gloves etc., added Ms Gadgil.

As a woman myself, I can empathize with the indignity of handling sanitary waste and like other women not be exposed to it. A simple red dot can ensure that no one has to go through this,” said P. Ritika, student volunteer with SWaCH.

Terming the Red Dot Campaign as beginning of a revolution in waste management, Isak isamail Shaikh, PMC Health Inspector said, “The red dot difference is there for all to see as citizens have started giving the waste in a separate identifiable form. It will make a big difference to those working in the SWM (Solid Waste Management) field.”

Since it has been just a month since the launch, the change is slow but steady says Ms Gadgil.

People are responding to the campaign, they are neatly wrapping up the sanitary waste, but it is a long way to go.

As Ms Waghmare goes from door to door collecting waste, she is changing people’s approach towards sanitary waste by educating them.

It is hard to change the mentality of people and often they ward off the issue by saying that it is not their responsibility or they do not have time to mark it a red dot.

She further adds, SWaCH members are hopeful and slowly but steadily, we will bring a change.