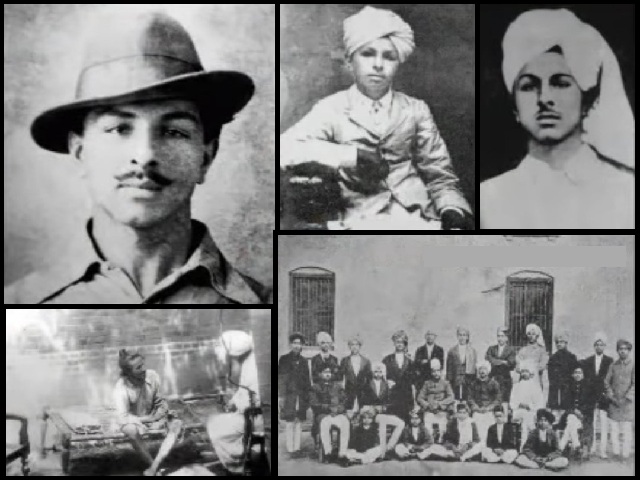 Bhagat Singh was a revolutionary freedom fighter who was hanged to death by the Britishers at the age of 23 years. On his 114th birth anniversary

“If someone else would have done this, I would not consider him less than a traitor…”, Bhagat Singh in a letter to his father, who sent an application to the Special Tribunal defending his son in Lahore case.

Bhagat Singh was a revolutionary freedom fighter who was hanged to death by the Britishers at the age of 23 years. His early execution made him a national hero of the Indian freedom struggle against colonial rule. Fondly called Shaheed Bhagat Singh, many consider him as one of the earliest Marxists of India. https://bab15e57910c022fcc5a5f687b505a7d.safeframe.googlesyndication.com/safeframe/1-0-38/html/container.html

Who was Bhagat Singh?

It is said that when Bhagat Singh was born, his father and two uncles were behind the bars for taking part in the agitation around the Canal Colonization Bill in 1907.

After studying in a village school for a couple of years, he attended an Anglo-Vedic school in Lahore, operated by Arya Samaj.  In 1923, he was admitted to the National College in Lahore which was founded by the Indian Independence activist Lala Lajpat Rai. The college which was established two years ago was in line with Mahatma Gandhi’s call for non-cooperation to shun schools and colleges subsidised by the British government.

As his family was actively involved in progressive politics, Bhagat Singh too became active in India’s freedom struggle. He visited the site of the Jallianwala Bagh massacre hours after thousands of unarmed demonstrators were killed by General Dyer.

Simon Commission was established by the British Government to report the political situation in India. The Commission headed by Sir John Simon was boycotted as no Indian was a part of it.

On 30 October 1928, the Commission visited Lahore. Lala Lajpat Rai led a silent march against it. In a bid to disperse the demonstrators, the Superintendent of Police, James A. Scott, ordered a lathi charge in which Rai was grievously injured. Rai died of a heart attack on 17 November 1928.

To avenge the death of Lala Lajpat Rai, Bhagat Singh along with two other two revolutionaries, Sukhdev and Rajguru, plotted to kill the Superintendent of Police. However, in case of mistaken identity, Bhagat Singh killed British Police Officer John Saunders when he was leaving the District Police Headquarters in Lahore on 17 December 1928.

Soon after this, a massive search operation was launched and Bhagat Singh had to flee from Lahore, shave his head and beard to avoid recognition.

“ Bhagat Singh did not become popular because of his act of terrorism but because he seemed to vindicate, for the moment, the honour of Lala Lajpat Rai, and through him of the nation. He became a symbol, the act was forgotten, the symbol remained, and within a few months each town and village of the Punjab, and to a lesser extent in the rest of northern India, resounded with his name. Innumerable songs grew about him and the popularity that the man achieved was something amazing.”

The bombing of Central Assembly Hall

On 8 April 1929, Bhagat Singh accompanied by Batukeshwar Dutt, threw two bombs into the Assembly chamber from its public gallery while it was in session. The bombs injured the members of the Assembly. The chaos and confusion created thereafter gave the window to both of them to escape the Assembly Hall, but they stayed there and shouted the popular catchphrase ‘Inquilab Zindabad!’. Subsequently, Singh and Dutt were arrested and were moved through a series of jails in Delhi.

Post a preliminary hearing in May, the trial in the case began in the first week of June. On June 12, both Singh and Dutt were sentenced to life imprisonment for causing explosions of a nature likely to endanger life, unlawfully and maliciously.

In 1929, his associates Sukhdev, Kishori Lal, and Jai Gopal were arrested in connection with setting up bomb factories in Lahore and Saharanpur. As the investigation in the case furthered, the police connected the dots of  Saunders murder, Assembly bombing, and bomb manufacture.

Bhagat Singh who considered himself as a political prisoner, along with others, noted the discrimination between the European and the Indin prisoners. The political prisoners demanded equality in food standards, clothing, toiletries, and other hygienic necessities, as well as access to books and a daily newspaper.

Singh along with other prisoners underwent a hunger strike. Failed attempts were made to break the strike by the government. With the nationwide popularity of the hunger strike, the government decided to advance the Lahore Conspiracy Case and Singh was transported to Bostal Jail in Lahore and the trial began on 10 July 1929.

Singh, Rajguru and Sukhdev were hanged to death in Lahore Conspiracy Case on 23 March 1931 at 7:30 pm