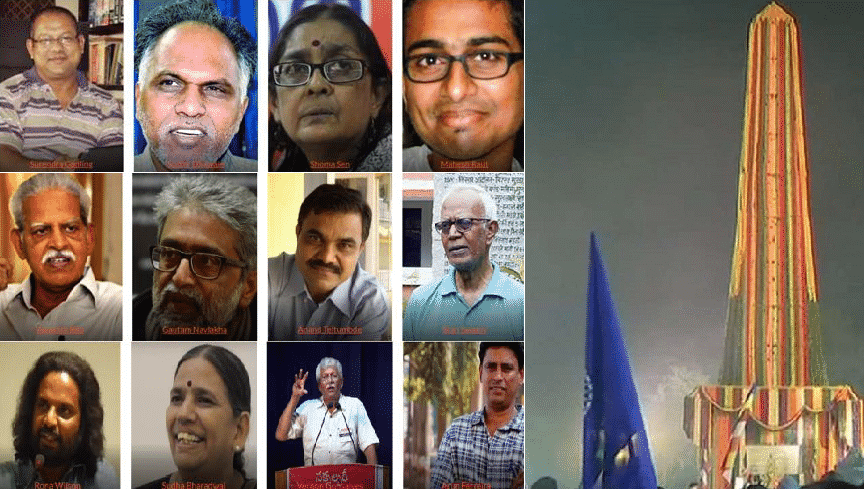 As many as 22 Dalit organizations, mainly from US, UK and Canada, have demanded that charges against 12 activists for allegedly conspiring in the Bhima-Koregaon violence, which took place on January 2, 2018, should be immediately dropped, as they meant to “silence” some of the strongest critics of the Indian ruling regime’s “continued exploitation, humiliation, and oppression of a majority of India’s population, especially Dalits, Adivasis, workers and women.”
Their statement follows online testimonies from US, Canada, United Kingdom, Japan and India, where speakers, “who care deeply about India” talked about “the alarming breakdown of basic guarantees of the Indian Constitution and the impunity of actions undertaken by the Indian state.”

The case is an attempt by the ruling regime to silence some of its strongest critics that revealed the continued exploitation, humiliation, and oppression of a majority of India’s population, especially Dalits, Adivasis, workers and women. Indeed, we see the Bhima-Koregaon case as a reaction to the anti-casteist united front of Dalits and other caste groups that was emerging through the Elgar-Parishad.
We also strongly condemn the recent shameful arrests of students from some of India’s universities such as Safoora Zargar, Devangana Kalita and Natasha Narwal who have staked their lives and careers for preserving the Constitutional right to dissent, which is at the heart of democracy and citizenship.

On May 30, 2020, we came together to hear testimonies from the United States of America, Canada, United Kingdom, Japan and India. The speakers were inspired to act of their own accord as people who care deeply about India and who are moved by the alarming breakdown of basic guarantees of the Indian Constitution and the impunity of actions undertaken by the Indian state.
Each one of them, in their own language of comfort, spoke the language of defiance, of anguish, of protest and of solidarity. Each one of them demanded the immediate and unconditional release of Dr Teltumbde – a figure who remains an inspiration to us as a scholar, a writer, a thinker, a prophet of our times, and a human being who relentlessly strove to make us think and feel the true spirit of the Indian Constitution and those of democratic social revolutionaries such as Babasaheb Ambedkar, Periyar and Marx.

Attempt is to silence voices that dare imagine an India that is based on Ambedkar’s vision of liberty, equality and fraternity

Many speakers reminded people that the work and lives of social justice defenders being imprisoned in the Bhima-Koregaon case is a testimony against the immorality of the violence perpetrated in India today by the ruling regime — the violence of development policies, violence of casteism against Dalits, the violence of patriarchy against women, the violence of capitalism against workers, and the violence of an ultranationalism against those seeking to live a life of freedom and choice.
Our effort has only begun. We are very diverse in our biographies but united in our focus. We stand clearly in solidarity with all victims of the unjust and draconian Unlawful Activities Prevention Act (UAPA) – a law that must go for a democratic India to emerge.
India is going through a very dark phase of its history, a phase that ominously threatens to extinguish any glimmer of hope for a majority of its citizens, undercut all promises of the Constitution, and consign all social justice and human rights defenders to oblivion in Indian jails.
The rule of fear by the use and abuse of particular laws and institutions of governance is an attempt to silence all voices that have dared to imagine an India that is based on Babasaheb Ambedkar’s vision of liberty, equality and fraternity.
We demand: